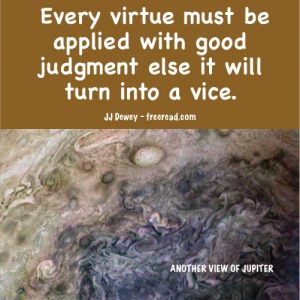 “Many of the people most violently fighting Communism could not tell you succinctly what those tenets are, but they are fighting – and rightly fighting – the totalitarian methods of cruelty, spying, murder, suppression and the lack of freedom. What they are doing in truth is fighting the abominable methods of imposing the rule of a few evil and ambitious men upon the ignorant masses, under the name of Communism. They are fighting the technique of exploiting the ignorant through misinformation, organised lying and limited education. They are fighting against the sealing up of nations within the confines of their own territory, against the police state, the lack of free enterprise and the reduction of men and women to automatons. This is the true imprisonment of the human spirit. The situation is, however, so pronounced and the evil so obvious (and the human spirit so basically and divinely strong) that it will eventually defeat itself; when the present group of totalitarian rulers (behind what you call the “iron curtain”) die out a different state of affairs will gradually supervene and a true Communism (in the spiritual sense of the term) will take the place of the present wickedness.”

“The concept of unanimity which has been presented by Soviet Russia runs completely counter to the truth. Their idea is that the concept, the idea, the decision and the interpretation of a group of powerful men establishes the truth, and to this truth the docile masses render prompt allegiance. This is a basic misconception and to it no member of the New Group of World Servers will render homage; they will fight this imprisonment of the human soul to the last gasp. Discipleship in the New Age, Vol 2, Page 238

“In the U.S.S.R. you have the problem of the levelling of the masses in all classes; this levelling has produced a low standard of living and the work to be done is to raise more than to bridge. This levelling produces serious conflict and one that is little realised by those who cannot penetrate into the sealed citadel which is Russia.” Rays and Initiations, Page 633

DK strikes a similar tone to a far right writer, strongly criticized by the Left, W. Cleon Skousen, who started writing popular anti communist books shortly after DK made these statements. Like DK, Skousen believed a spiritual communism (called The United Order) was a possibility, but saw Russia’s forced idealism as a great evil.

Like any other ideal, what is good and bad about it, what works and doesn’t work, can only be discovered in a melting pot fomented through free will. Imposing ideals from on high, no matter how benevolent they sound, without testing them in the fires of free human enterprise does not work.