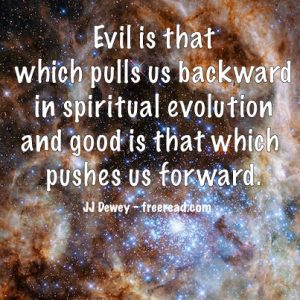 Many seekers make the mistake of believing that good and evil are easily identifiable and understood, but this is far from the case. So also is the difference between the left and right hand paths. Many confuse evil with the common word “bad.” Yes it is bad to lie cheat, steal etc, but evil from a higher spiritual standpoint is something different and grasped by only a few. In fact, In David’s’ day understanding was so rare that the psalmist declared, “There is none that doeth good, no not one.” Psalms 14:3

And Isaiah told us that true good was rare because it was distorted and not understood, “Woe unto them that call evil good, and good evil; that put darkness for light, and light for darkness; that put bitter for sweet, and sweet for bitter!” Isaiah 5:20

According to the Genesis story the understanding of good and evil was such a mystery that Adam and Eve did not have a clue as to what it was until they ate from the tree of knowledge of good and evil. Then after they acquired this knowledge the Gods made an amazing statement: “Behold, the MAN IS TO BECOME AS ONE OF US, to know good from evil.” Gen 3:22

So the true knowledge of good and evil gives us humans the power to become as the Gods – notice the plural wording “one of us.”

Since the true knowledge of good and evil is rarely understood and it is a key to the consciousness of God let us attempt to comprehend it. DK gives us some hints. He says, “Evil is due to wrong perception and erroneous interpretation of that which is perceived.” A Treatise on White Magic, Pg 630

We tend to think that various ideologies are good or evil but of them DK says, “The platform of the leading ideologies is not necessarily wrong or wicked; it is the imposition by force and by a police state of an ideology, and its use by powerful men or groups for their own benefit, plus the keeping of the people in blind ignorance so that no free choice is theirs—which is fundamentally wicked and evil. Rays and Initiations, Page 744

So limiting freedom and keeping people in ignorance is a prime ingredient of evil.

After identifying evil with involution and disciples with evolution DK says this:

“Evil lies in the refusal to leave behind when conquered; it consists in remaining immersed in matter that is dominated and hath no more to teach; it is the clinging to forms that should not hold the evolving spirit, in vibrating to a rhythm too heavy for the point reached; it is the holding on to things behind instead of stretching up to those ahead and before; it is a desecrating of knowledge gained and a prostituting of it to what is realised to be a retrograde and unworthy step; it is choosing to talk in the dark or twilight when just ahead the light can be seen; it is the choosing of a life of ease and no struggle, a going with the tide, when the inner voice points the way along a rocky and difficult path to a goal acknowledged to be desirable; it is acquiescence instead of aspiration, a standing still instead of going forward, a closing of the eyes instead of straining them to see a wide horizon; it is knowing and not using knowledge.” A Learning Experience; Mary Bailey (quoting unpublished notes from DK), Pages 60-61

Thus they key to understanding good and evil is the realization that evil takes us backward, or toward dense matter and good moves us forward toward Spirit. The power to discern the difference is a key to higher consciousness.

Many from the left only associate those of the political right with evil, Hitler and Nazism while giving a pass to tyrants, mobs rioters and many forms of depravity and criminal activity as long as they do not interfere with their political power.

While the left often pigeonholes the entire right (which is about half the population) as evil Nazis, the right generally does not retaliate in kind. Few from the right categorize all leftists as evil, but instead merely label them as misled. For most on the right the word evil is reserved for those who support the enslavement of the human spirit or the killing of the innocent.

DK, on the other hand was a definite believer in good and evil. Again, in the Great invocation he utters the prayer, “And may it seal the door where evil dwells.”

The teaching of the differences between the Brotherhood of Light and the Dark Brotherhood are at the core of his writings. He did not hesitate to call evil by its name and strongly equated Hitler and the Nazis with evil for they were definitely fighting for the triumph of materialism. After the war he said:

“The leader of the conflict against evil in high places is the Christ, the Head of the Hierarchy. What is the attitude of the Christ at this time?… He knows Himself to be the inner spiritual Commander of the Armies of the Lord. His is the responsibility of awakening the souls of men to their presented opportunity and to the need of bringing to an end this ancient conflict between the Lords of Evil and the Messengers of Light. His has been the problem of teaching humanity that, in order to demonstrate true love and to provide scope and opportunity for a civilisation in which love, brotherhood and right human relations are governing factors, those essential steps must be taken which will accomplish this….

“The sword of discrimination is wielded by the initiates and the disciples of the world, and by its means the distinction between good and evil, with a consequent presentation of free choice between the two, has been laid before humanity, and the lines of demarcation have been made abundantly clear in this world war. Externalization of the Hierarchy, Pages 433-434

By most any definition of the terms good and evil exists in the world. If this is not recognized then how can evil be replaced with good? One cannot defeat an enemy if he does not understand or recognize what the enemy is.

Again, speaking after the war he said, “the forces of evil will now endeavour to utilise the character of humanity as a whole (at its present total point of development) to hinder the Forces of Light, prevent the attainment of world tranquillity and world understanding, and thus delay the day of their own final defeat. This defeat, when accomplished, must include the three worlds of human evolution—mental, emotional and physical. For long these evil forces have used psychology in order to reach the ends they had in view, and have used it with amazing success; they are still using it, and can be depended upon to employ its methods to the uttermost. They use the press and the radio in order to distort human thinking; they present half-truths, impute false motives, rake up past grievances, foretell (with foreboding) imminent difficulties; they foster ancient prejudices and hatreds, and emphasise religious and national differences. In spite of much shouting, demanding and proposed organisation, there is no truly free press anywhere; particularly is it absent in the United States, where parties and publishers dictate newspaper policies. The main reason why there is no really free press is based on two factors: first, the fact that humanity is not yet free from its predetermined reasonings, its basic ignorances of factual history, or of nations and their psychology; humanity is still controlled by racial and national bias and by prejudice. Secondly, the fact that all this is nurtured and kept alive by the forces of evil, working upon the inner side of human affairs and dealing mainly with the psychological angle because it is so exceedingly potent. This they will increasingly do as this planetary war draws to a close; they will seek to offset the work of the Hierarchy, to hamper the activities of the New Group of World Servers and to cloud the issues involved to such a degree that the men of goodwill everywhere will be bewildered and will fail to see the clear outlines of the factual situation or distinguish between what is true and what is false. Forget not, the forces of evil are exceedingly clever. Externalization of the Hierarchy, Page 451-452

The political left often criticizes the right for attempting to define good and evil and discerning who is on the side of the freedom of the human spirit. True, there are often flaws in their assessments, but at least they are trying to be on the side of God and Spirit and many would agree with DK on the subject.