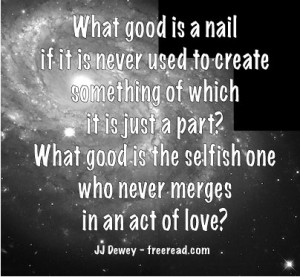 Atoms join together to create molecules. We learned that in basic chemistry, but what we didn’t learn was what a magical happening this was.

Take the atoms of hydrogen and oxygen for example. We all know what oxygen is. It is that element in the air we breath that keeps us alive. And hydrogen is the most basic of elements, the most abundant in the universe.

If these two elements are cooled way below zero they will turn into liquid that can be used for rocket fuel, as was the case in the Saturn rocket that sent men to the moon.

But the real magic comes in when these two elements combine together in a bonded relationship that enables them to share their energies. When two atoms of hydrogen bond with one atom of oxygen they suddenly cease to be ingredients of rocket fuel or part of the life giving air we breath. Instead the two elements become something much different than they were before. They become water, or H2O.

Even though water has much different properties than either hydrogen or oxygen the two elements do not lose their identities. If they separate they go back to being just oxygen or hydrogen and are no longer water.

That said, let is define the Molecular Principle.

It is the tendency of all the creations in the universe to find complimentary parts and join with them to create something greater than themselves.

Water is, of course, just one example of greater creations made from the joining together of atoms. There are millions of molecules in our universe composed of many different combinations of atoms.

This molecular principle does not begin or end with the combing of atoms. Atoms themselves are composed of many subatomic particles that have joined together to create it. Then molecules join together to create greater substances and even life as we know it. One human cell is compose of billions of molecules that have joined together and the human body with all its numerous parts are composed of over 30 trillion cells.

The molecular principle does not stop there. Humans join together to create families, tribes, gangs, cities, states, nations, businesses, corporations, churches, teams and most any kind of group one can imagine. In each case the person maintains his identity, but when acting as a member of the group he is no longer just an individual, but a part of something greater than himself.

Each seeker who desires to advance on the path of spiritual evolution must apply the Molecular Principle to some degree and indeed there are numerous degrees of application. It ranges from a loose association with a group to a fully-fledged bond. I have written a book called The Molecular Relations that tells us how this principle will lead us toward creating our next great step in evolution through the creation of a greater spiritual life.

In the meantime each of us needs to ascertain how we can be of the greatest possible value to the whole by joining in and doing our part to serve our brothers and sisters.

No man is an island entire of itself; every man is a piece of the continent, a part of the main; if a clod be washed away by the sea, Europe is the less, as well as if a promontory were, as well as any manner of thy friends or of thine own were; any man’s death diminishes me, because I am involved in mankind. And therefore never send to know for whom the bell tolls; it tolls for thee.