Posted July 27, 2010
Since we are on the topic of Mormonism I thought I would share an interesting insight. After they went west Brigham attempted to fulfill Joseph’s dream of creating a kingdom that would be entirely separate from the United States. They staked out a vast amount of territory called Deseret that ranged from Wyoming to Colorado to New Mexico to the shores of California. 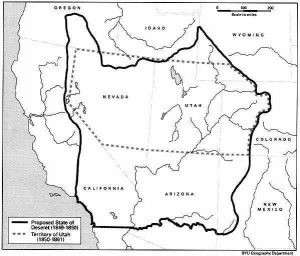 Then I was reading a book the other day called “Forgotten Kingdom” wherein the author made an observation that turned on a light within me.

He said that they had tremendous momentum going toward achieving the goal until something monumental happened that changed the course of history.

That pivotal date was August 28, 1852 when Brigham Young officially announced that plural marriage was a doctrine of the church. From that date on immigration to Utah declined and the whole county became polarized against them and the powers that be did everything in their power to make sure the Mormons never became an independent state.

It is interesting then how much damage plural marriage did to Joseph’s vision. First it got him killed and secondly, it prevented his heirs from ever establishing an independent kingdom. If the Masters had anything to do with the doctrine they surely erred in judgment on that one.
Copyright 2010 by J J Dewey