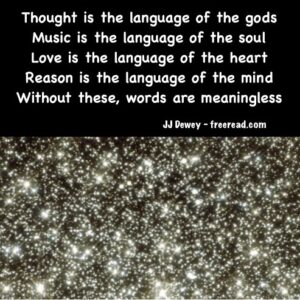 Here is the next scripture to contemplate:

“And I saw another angel fly in the midst of heaven, having the everlasting gospel to preach unto them that dwell on the earth, and to every nation, and kindred, and tongue, and people,

“Saying with a loud voice, Fear God, and give glory to him; for the hour of his judgment is come: and worship him that made heaven, and earth, and the sea, and the fountains of waters.” Revelation 14:6-7

After seeing the Lamb, or Christ, followed by the 144,000 there comes another sight – an angel flying in the midst of heaven. What does this mean?

Heaven stands for the realm of spirit. Angel normally means “messenger,” but to understand how it applies here we must realize that the angels of the Bible were always mediums of a message of light. The disciple looks directly toward spirit, ignoring the pull of matter, or earth, and revelation comes to him. As new understanding comes, he realizes he, himself, is the angel, and the message is now in him.

And what is that message? It is “the everlasting gospel.”

Exactly what would that be? The English word “gospel” comes from a combination of two Anglo-Saxon words, “God” and “Spell” which together basically means “to tell about God,” or “God’s story.”

To help us understand better let us examine the more ancient Greek word for Gospel found in the text, which is, EUAGGELION. You have probably heard that this word means “good news.” The disciples went forth and preached the “good news” of the resurrection of Jesus and this was the basis for its use.

Actually, Jesus used the word regularly before the resurrection when he was walking the earth. He often talked about the gospel of the kingdom of God and if one reads the context, they will see that good news is a questionable meaning.

EUAGGELION comes from the two Greek words EU and AGGELIA. EU means “good, happy or pleasing.” AGGELIA is the Greek word for “angel” and means “messenger” or “the carrier of a message.” Rather than “good news” it would be more accurate to call it a “good message” or a “good or sound doctrine, teaching or philosophy.”

The meaning is further enhanced by being called the “everlasting gospel.” The word “gospel” in the Bible is used in relation to the teachings of Christ, who is also called “The Word” by John. Thus the everlasting gospel could be called the eternal teachings, or “Eternal Words,” or as Jesus called them, “words which shall not pass away.” Thus we are told that the disciple penetrates the veil between heaven and earth and ascends in consciousness to the realm of Spirit, sees eternal principles and brings them down to earth. When words of Spirit are thus brought to earth, they will not pass away for they came from timelessness or eternity.

What are disciples to do with these eternal words of the everlasting gospel?

They are “to preach unto them that dwell on the earth, and to every nation, and kindred, and tongue, and people.”

It is interesting that “preach” comes from EUAGGELIZO, which is essentially the same word as the one for gospel, which is EUAGGELION. The only difference is that EUAGGELION is a noun and EUAGGELIZO is a verb. To help see this let us substitute a word of similar meaning that is used as both a verb and noun in the same sentence. We will substitute “gospel” and “preach” with the word “teach.”

…having the everlasting teachings (noun) to teach (verb) unto them that dwell on the earth, and to every nation, and kindred, and tongue, and people.

The English “evangelize” also is derived from EUAGGELIZO, but the original Greek does not carry with it the zeal and emotional fervor which is associated with modern day evangelicals. The original gives us the image of one more like Plato quietly teaching rather than a fire and brimstone tent preacher. Better yet it gives us the image of the Master himself gently giving out his eternal words in the hills of Palestine.

The disciple thus receives eternal words he forms into teachings and gives them to the people, but because they are eternal words they shall not pass away. Even though Jesus had only 120 followers when he was resurrected his words did not pass away because they touched on eternal principles, and when this is done, the meaning cannot be erased from human consciousness – not in this life or a future life. Once a principle is embedded in human consciousness it is not lost as is a piece of data.

The principles eventually permeate all those “…that dwell on the earth, and to every nation, and kindred, and tongue, and people,” not because of the zeal of the followers, but because of the power in the words themselves. Whether it be done through zeal, through a quiet whisper in a prison cell or a professor in a classroom the effect is the same. Those who touch the soul will recognize the principles behind the words and will never forget them.

Let us just take one statement from the Master: “The truth shall set you free.”

It did not take an army of missionaries nor even require a conversion to Christianity for seekers throughout the world to sense a profound truth here. Those who are ready only had to hear it once and it was then embedded on their souls.

The same applies to the many parables He taught. Now let us examine the next verse.

“Saying with a loud voice, Fear God, and give glory to him; for the hour of his judgment is come: and worship him that made heaven, and earth, and the sea, and the fountains of waters.” Revelation 14:7

When the disciple receives eternal words, he realizes the depth of them is beyond the power of his personality self to have initiated. He has the impulse to give reverence and glory to God for only God working though him could have brought the everlasting principles to the earth.

“…for the hour of his judgment is come…”

Judgment comes from the Greek KRISIS, which is more accurately translated as “correction.” The revelation of true principles or eternal words brings instant correction to the disciple. The hour of judgment is the hour of revelation. He becomes a knower and, as a knower, realizes that there is a higher power than his lower self and he acknowledges that something much greater than he made all things.

The self is not something ready-made, but something in continuous formation through choice of action. John Dewey (1859 – 1952)