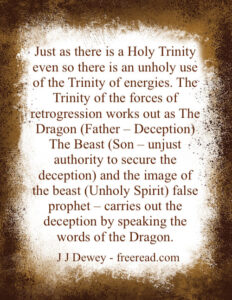 Who or What is the Beast?

Continuing with Revelation we read: “And the beast which I saw was like unto a leopard, and his feet were as the feet of a bear, and his mouth as the mouth of a lion: and the dragon gave him his power, and his seat, and great authority.” Revelation 13:2

When the dragon was thrown out the seekers were “saved” and released of their guilt. They could no longer be controlled through fear so the dragon created an image to himself out of the sea of emotionally based people who remained. The beast was given great authority because the dragon understood how to control people through substituting the inner God for the outer and then using the outer God to control through fear and guilt.

The key to understanding the Beast is the realization that he represents a false authority which has been gained by substituting an outward voice for the inner voice of God.

The beast is unearned authority, unworthy of our trust, yet the masses give it their trust because they think it speaks with the voice of God.

Most of the sects see the beast as a great world antichrist dictator that will arrive on the scene just before the end of the world. They have been expecting him to show up any moment for many years. Some thought it was Hitler, but he wasn’t quite awesome enough.

If they had read the writings of John they would have not been so deceived.

“And every spirit that confesseth not that Jesus Christ is come in the flesh is not of God: and this is that spirit of antichrist, whereof ye have heard that it should come; and even now already is it in the world.” 1 John 4:3

To fully understand this scripture one must realize that if early Christians acknowledged Jesus as their authority rather than Caesar they were put to death. John here was acknowledging that this terrible misuse of authority made it clear that the antichrist or beast was already in the world.

If the antichrist or beast was already in the world 2,000 years ago then why are the religious still waiting for him to surface? Answer: The beast itself deceives them. They have followed authorities who have misled them instead of looking at the source.

Notice again how the authority of Jesus is described:

“And it came to pass, when Jesus had ended these sayings, the people were astonished at his doctrine: For he taught them as one having authority, and not as the scribes.” Matthew 7:28-29

The scribes were the ones the people looked to as authorities in scripture, yet there was something about the authority of Jesus that was different. What was it? Here Jesus spoke boldly against the negative use of authority.

“But woe unto you, scribes and Pharisees, hypocrites! for ye shut up the kingdom of heaven against men: for ye neither go in yourselves, neither suffer ye them that are entering to go in.” Matthew 23:13

This is interesting wording: “For he taught them as one having authority, and not as the scribes.”

Why would it say this when the scribes were considered the greatest authorities on the scriptures? The reason was that their only source of authority was their black and white memorization of the scriptures. They knew the words but did not know what they meant. They could never stand up and teach and just say the words of the Spirit pouring through their hearts. They could not teach without quoting some other authority.

Jesus, on the other hand, taught new things that were not quotes from any known book and this seemed to demonstrate a new kind of authority they had never seen before, an authority bestowed from within and accepted from within by others. They were so astounded by this authority that did not depend on degrees and books that it is written:

“And when he was come into the temple, the chief priests and the elders of the people came unto him as he was teaching, and said, By what authority doest thou these things? and who gave thee this authority?” Matthew 21:23

Jesus had an authority that he could demonstrate and no one remembered seeing such a thing in the spiritual realm before. Jesus was the one man in the kingdom who did not have the mark of the beast.

Go to any church or even a new age movement and try and teach them something contrary to that which their authorities tell them and see what happens. You will often encounter fear and very high resistance.

Now remember an authoritative tool of the beast does not have to be a human. It can be a book, crystal or unseen alien, even the Bible itself. If you really want to sense the power of the beast attend any church with an authoritative dogma or leader and just ask a question in Sunday School that forces their minds in the opposite direction of their beastly authority.

New age groups seem to be a little more polite but they also get extremely uncomfortable when you ask the wrong questions.

“..the dragon gave him his power, and his seat, and great authority.” Revelation 13:2

Almost all powers and energies are dual. What are the positive and negative use of authority?

Seems to me that the worst kind of self-deception and negative use of authority would be to give away the authority from Self to something outside, be it beast or whatever.

The keyword of the beast is “authority.”

Therefore, when the dragon gives the beast authority, he automatically gives power and a seat (or some type of position from which to command). The Beast itself is a giant world thoughtform that is a vehicle for the dragon to establish his authority. The dragon gives authority to the beast but he owns the beast so he has lost nothing and still has control.

The beast will often use the truth to increase his authority and the deception to accept his authority comes from our own self-deception and has little to do with the beast itself. “To thine own self be true” is not something one can do until one reaches a certain degree of evolution. Therefore, the beast does not even have to lie.

Take the former Soviet Union. Communism there was established on a true principle of equality, sharing and equal rights. Why didn’t it work? Because the beast demanded unquestioned authority and this turned good into evil. It is good that we help the poor but if we submit to an authority that takes all of our money and gives it to the poor then we will be poor too. Unquestioned or unproven authority is always a destroying energy.

In the true student-teacher relationship authority is only recognized because it is earned. Let’s say you want to learn Spanish and two teachers surface who say they can teach you. They both seem equally convincing, but the truth is that one of them knows the language well and the other one does not. If you accept either as an authority just because one tells you to, then you have a 50-50 chance of getting a bad teacher.

What do you do? You test the teacher. Have him actually speak some Spanish. Give him several paragraphs from English and see if he can translate and then check out the translation for correctness. Finally, you will establish in your mind that one of them can truly teach you. Once you have tested your teacher then you do not have to check up on him in every little detail; but when you have learned the basics and want to go to advanced Spanish, you do need to check again to see if he has anything more to teach you or if you need to move on to another teacher. Or become a teacher yourself.

Thus, positive authority is that which has been earned. Such an authority is ready willing and able to prove his or her credibility at any given moment. He does not fear a challenge because he is secure in his ability.

Unfortunately, there are not very many positive authorities in the world today. Even those who have studied, apprenticed and worked hard at their skill are often the worst authorities to rely on. Take medical doctors. They are often no healthier than their patients.

We go to psychologists for authority on mental health and happiness, yet as a profession they have among the highest suicide rate in the world.

We have authorities giving us guidance when they have not discovered the key themselves. The average person on the street obviously has a greater concept of what makes life worthwhile.

We send criminals to the prison authorities who head a “correctional” facility yet when he is released the authorities have turned him in to a more dangerous person than he was when he began his sentence. We hire politicians as authorities in making laws and spending money and they make laws that the average person realizes make no sense and they spend our money with the intelligence of a ten-year-old kid who just found a hundred bucks.

We set up ministers, priests and evangelists as authorities in scripture and over our spiritual life, yet many of them do not even believe the scriptures and many little old ladies have a better knowledge than they do. Then there are many ministers who have never had a true spiritual experience or have never found God yet are telling others with the voice of authority how to lead the spiritual life.

We could go on and on. How many lawyers do not have a true sense of the just use of the legal system? How many bosses got their position because of who they know, not because of what they know? Such people often hurt the company and cause much grief to subordinates.

Many of these people have worked for a lot of years to earn their position of authority, but they lack just one thing. They have never demonstrated in the real world that which they claim to be able to teach or know.

Even though these people are often no better authorities in their profession than the common sense of the average person, most of them have at least gone through some learning process. There are still other authorities that have even bypassed normal learning channels.

The power of election (decision) is given to us so we can find our true authorities and place them where they can be useful dispensers of their wisdom and talents. Our elected officials are not perfect but they are much better than appointed ones.

So let us apply this to the beast. The beast is a thoughtform under the control of the “dragon.” This thoughtform covers the entire planet. He causes all to “receive the mark” (verse 16). This is why Satan (the adversary of light) is called “the god of this world” in the scriptures. Over 95% of the religious world think the beast has not yet surfaced yet ironically, they are under the control of the false authorities (beast) themselves.

Goodness is the only investment that never fails. Henry David Thoreau