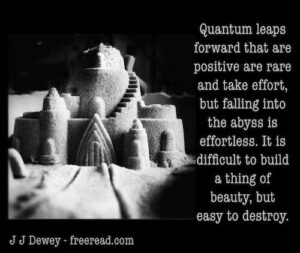 The Power of the Beast

John tells us the beast: “…was like unto a leopard, and his feet were as the feet of a bear, and his mouth as the mouth of a lion:” Revelation 13:2

Let’s first look at these three beasts or animals – the leopard, the lion and the bear – plus the dragon who gives them power. What do they have in common? The one thing they have in common is they are all deadly and dangerous and capable of tearing the average man to shreds. Their very presence can put stark terror into the hearts of men. We know about the three beasts and have heard mythological stories about the dragon, but one thing is sure. If the leopard, the lion or the bear is sitting at a peaceful rest in our presence, we want to be quiet as a mouse and not do anything disturb them.

The beast as a whole had the appearance of a leopard. All leopards are female. The male of the species is called the panther. The leopard hunts in the dark and strikes with greater power, ferocity and speed than any other cat. The prey is often asleep with eyes closed when attacked. The symbology of the leopard being female is that the female is more polarized on the emotional side than the male and the beast uses the emotions rather than the mind for its control through implementation of fear. The Beast hunts out those who defy its authority and seeks them out in the dark when they are sleeping and not expecting attack. Just like the “leopard cannot change its spots,” neither can the beast. It must always remain true to character.

Next, we are told the Beast had “the mouth of a lion.” The lion is called the King of Beasts. Therefore the mouth of a lion would be the mouth of a king. In other words, the beast speaks through those who have established themselves with a kingly authority over their fellowmen. This could be an actual king or queen, a revered political leader, a government appointee, a leader of some organization, a religious leader, a cult leader or even your autocratic boss.

The lion is not an animal you want to get angry. When it lets out a roar it strikes terror in the hearts of all that hear. The early Christians who did not accept the authority of the Beast were fed to lions and devoured by them. However, the Prophet Daniel was thrown to the lions and by faith in God he was delivered from their power.

The Beast had the feet of a bear. In other words, the beast will crush under foot anyone who gets in its way. When the bear comes walking in your direction the smartest thing to do is to get out of its way. Or we can also say that when the beast of unjust authority comes in our direction the smart thing would seem to be to not challenge it, but just get out of its way.

“.. and the dragon gave him his power, and his seat (throne), and great authority.” Revelation 13:2

In a previous verse (Rev 12:3) we are told that the Dragon itself has seven heads so we see that the Beast is like an image we have made to resemble the Dragon. In the days of Moses the blasphemy against God was to make an image (like the golden calf) that represented God. This is what the Dragon does. He makes images or illusions that are substitutes for God.

The Dragon itself has no power over man, but only can establish power through illusion. So he waits and waits until man makes an image of him and piece by piece throughout history he endows the image with “power, a throne and great authority.” Finally after about 6000 years from the last Adam the image of the Dragon is nearly complete.

We humans, by the desire of our egos, (as John mentioned) have created a monster out of nothing real that pleases a great negative thought form, which is his only form of incarnation on this planet. We learned earlier that the Dragon is a serpent and is red. This gives us a clue as to additional insights. First, red is the color of blood and the Bible says that the “blood is life.” (see Leviticus 17:11 and Deuteronomy 12:23)

Interestingly the serpent is also a symbol of life. The ancients teach of a fiery Serpent at the base of the spine which is the foundation fire of all life in our body. This is also called the Kundalini energy. Thus the Serpent seems to grant the beast power over life and death and gives the beast its tremendous illusionary authority over mankind. If the beast has power to take your life you would want to keep on its good side.

Another interesting thing about the serpent fire at the base of the spine is that when soul contact comes the serpent uncoils, it virtually disappears and a tremendous energy lifts up through all your centers uniting heaven and earth within you. In other words when the reality behind the serpent is revealed, your god-like powers are restored and the illusion of the Dragon is no more.

The dispelling of the illusion of the Dragon will proceed slowly at first on an individual basis, but the time will come when the Kundalini of the whole planet will be raised and the beast will be destroyed as if by fire. There is also great symbology in the story of the Serpent who led Adam and Eve away from the tree of Life by deception. As soon as we see through the deception fostered by the beast the Tree of Life again becomes available to us. We will discover that we left the Tree of Life – the Tree of Life did not leave us.

You are going to let the fear of poverty govern your life and your reward will be that you will eat, but you will not live. George Bernard Shaw (1856 – 1950)