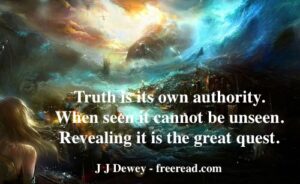 “And there followed another angel, saying, Babylon is fallen, is fallen, that great city, because she made all nations drink of the wine of the wrath of her fornication.” Revelation 14:8

After the disciple receives the revelation of the “everlasting gospel” or the language of the soul, which is the language of principles, or eternal words, he then attaints to another level of consciousness symbolized by this other angel. The world which had been presented to him through pieces of data falls, never to rise again.

Babylon means and represents confusion, and when the principle behind information is not seen, confusion is always the result. This reveals to us the core principle behind Babylon, which is corrupt communication caused by attention on data rather than being a seer of principles.

Just like two or more people can witness an accident or event and report so differently that one may wonder if they saw the same thing, even so, do two or more who receive data or facts see much differently. Two can have before them the same words, the same Bible, the same polls etc. and their understanding can be a universe apart. But if two or more see the same principle through the eyes of the soul their oneness is assured.

The instant the principle behind the facts is seen confusion, or Babylon falls, and is no more. Now the disciple has eternal words built on principles, all is seen with clarity and confusion no longer exists.

The scripture says “she made all nations drink of the wine of the wrath of her fornication.”

The people of all nations are made to drink facts and data often jumbled together to force distorted incorrect conclusions. The main incorrect conclusion that results is the attention on the outer false Gods of unjust authority. This causes the people to commit fornication against their own souls. Because of this mistake many painful problems occur which is the “wrath of her fornication.”

Here are the next verses:

“And the third angel followed them, saying with a loud voice, If any man worship the beast and his image, and receive his mark in his forehead, or in his hand, The same shall drink of the wine of the wrath of God, which is poured out without mixture into the cup of his indignation; and he shall be tormented with fire and brimstone in the presence of the holy angels, and in the presence of the Lamb: And the smoke of their torment ascendeth up for ever and ever: and they have no rest day nor night, who worship the beast and his image, and whosoever receiveth the mark of his name. Here is the patience of the saints: here are they that keep the commandments of God, and the faith of Jesus.” Revelation 14: 9-12

To take the mark and receive assurances from the external authority always seems to be the safe route but this is a powerful illusion that is dispelled by lifetimes of torment. The pilgrim receives one torment after another because of his wrong choices. The torment spoken of comes not in a burning hell in the other world, but in this one.

All who receive the mark of the beast undergo tremendous suffering over as many lifetimes as they continue to receive it, but those who particularly suffer are sincere seekers who touch the soul and receive a degree of communion with the inner God. Time and time again over a series of lifetimes they are torn between listening to the voice within or the voice without. Some guru, priest, prophet or authority keeps distracting them. Unfortunately, as they pass through this part of the path of liberation, they make the wrong choice again and again until they become so internally weary with the result of their choices that they finally shift in consciousness and give more weight to the inner than the outer voice. After this shift occurs, they receive the name of God in their forehead and escape the mark of the beast. They still have external problems but internally the torment is completely gone and they receive the inner peace that passes all understanding.

But of those who receive the mark of the Beast it is written:

“And the smoke of their torment ascendeth up for ever and ever: and they have no rest day nor night, who worship the beast and his image, and whosoever receiveth the mark of his name.” Revelation 14:11

Even though the voice of the Beast seems to offer temporary safety this is not the case on the inner planes. To follow the Beast the seeker tries to suffocate the inner voice. Then he tries ignoring it, denying it, rebelling against it, and listening to the noise of the Beast to drown it out etc. These tactics seem to work for a while, but the moment he reflects internally the inner God is again sensed and an inner awareness that he his allegiance is to the Beast makes his spirit in conflict with his true identity.

He never feels satisfied. Something seems missing, even though he may often claim to be fulfilled.

Then sooner or later the outer beast, taking the place of God, will give him a commandment or order that completely violates the direction of the inner God. This violation causes him “torment” and allows him “no rest.” Then to make matters worse the Beast gives him other commandments he cannot obey. The moment he violates them his torment is increased as if he were a furnace being stoked.

“Here is the patience of the saints: here are they that keep the commandments of God, and the faith of Jesus.” Revelation 14:12

All the saints went through such mistakes and torments in past lives and must be patient and endure their outward afflictions that pay off their karma. In addition, great patience is needed to deal with others still under the control of the Beast.

“And I heard a voice from heaven saying unto me, Write, Blessed are the dead which die in the Lord from henceforth: Yea, saith the Spirit, that they may rest from their labours; and their works do follow them.” Revelation 14:13

Those who “die in the Lord” are those who have escaped the mark of the Beast. After death they no longer face outward conflicts from the Beast and his agents but have a much deserved rest. The disciples have a choice and can go to a heavenly situation where their good works follow them. They enjoy a period of bliss or they can continue to serve from the other side and assist the Christ and his Masters.