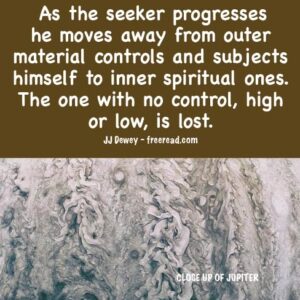 We have been talking about the outer manifestation of the second beast; now let us talk about the inner as it applies to the disciple and his work.

Let us repeat the verses and interpret them:

“And I beheld another beast coming up out of the earth; and he had two horns like a lamb, and he spake as a dragon.” Revelation 13:11

The disciple has cast the dragon out of his higher consciousness and placed it on the earth, or consigned it to his lower personality. He places lower desire under the control of the higher self and initiates a great work that will serve the world. This work has two horns like the Lamb of God. In other words, the words and works that launch it are as the words and works of Christ. Unfortunately, the work is carried forward by fallible humans who have not dominated the dragon by spirit. Many of these well-meaning people still have the dragon in their controlling consciousness and consequently “speak as the dragon” while thinking they are speaking as The Christ.

“And he exerciseth all the power of the first beast before him, and causeth the earth and them which dwell therein to worship the first beast, whose deadly wound was healed.” Revelation 13:12

Those who inherit the disciple’s work are just like the first beast and begin to use unjust unearned authority. Just one example is the church fathers during the Middle Ages who burned heretics at the stake and stamped out free speech with every bit as much authority as did the Romans who fed the Christians to the lions.

“And he doeth great wonders, so that he maketh fire come down from heaven on the earth in the sight of men,” Revelation 13:13

These caretakers of the work appear to have the fire of the Spirit. They take the place of God and are seen as authoritative as were the words from the burning bush seen by Moses.

These caretaker authorities deceive the followers of the work. Miracles are often attributed to them, which reinforces the belief of the masses. Finally, the caretakers cast aside the teachings of the initiate and frame the organization in the image of the beastly authority, which has ruled the earth from the beginning.

“And he causeth all, both small and great, rich and poor, free and bond, to receive a mark in their right hand, or in their foreheads: And that no man might buy or sell, save he that had the mark, or the name of the beast, or the number of his name.” Revelation 13:16-17

Big Brother, in the book 1984, was the quintessential Beast in that it was not enough that citizens did what they were told without questioning, but they also had to think as they were told to think.

The reason this blind obedience is associated with the Beast is this is what is expected from a good animal, or beast. A good animal is expected to obey our commands without question. The master has to merely speak and the trained animal obeys. Humans are supposed to be above the animal kingdom in this respect. We are supposed to be able to think independently, look within, think within and make our own decisions.

Those who give in to the power of the Beast are sinking into a subhuman consciousness.

If I were a representative of the beast I would not be teaching as I am, but would set myself up as the ultimate authority and would discourage independent learning and thought while at the same time proclaim I am for free thought, learning and an open mind. In the old days disciples were imprisoned or killed for questioning. Fortunately, the Constitution that wounded the Beast, along with the progress we have made in the rule of law, gives us some protection in this age.

One who has freed himself from the authority of the beast will test all teachers with the God within, including me, but once a teacher’s words have passed that test a challenging attitude becomes unnecessary. Nevertheless, it is important to never get lazy and always check all things through the soul and then question when necessary.

How is it that we cannot buy or sell without the mark? Doesn’t everyone buy and sell? Does everyone have the mark?

Many people think the receiving of the mark is in the future. They see the mark as an implanted computer chip or the use of a bar code that allows us to buy or sell. This could make some sense if only the right hand were mentioned, but why would either the state or an individual want to use the forehead as a place to implant a device used by grocery scanners?

Some answer that maybe the forehead would be used if a person lost his right hand. But the logical thing would be to use the left hand in such a case.

We are also told that we must have the number of the Beast to be able to buy and sell. The need for a literal 666 in possession of the customer to buy groceries does not make a lot of sense either.

The scripture makes much more sense when we realize that the Beast is already here and has been for many thousands of years. The marks in the right hand and forehead are not the same, but two different things, representing labor and thought.

Strong authority has controlled our money supply and industry so that almost all have to bear the mark to be able to buy and sell. When the individual works for another to earn money he must do what he is told and not question or he will be fired. If he has no source of money or goods he cannot buy or sell. Business owners and the self-employed are not under such tight control but even these are subject to many rules, regulations, taxes and licensing or they cannot earn money to enable them to buy or sell.

Finally, we come to perhaps the most mysterious verse in the whole Bible:

“Here is wisdom. Let him that hath understanding count the number of the beast: for it is the number of a man; and his number is Six hundred threescore and six.” Revelations 13:18

What is the meaning of this number?

In the beginning there was nothing. God said, ‘Let there be light!’ And there was light. There was still nothing, but you could see it a whole lot better. Ellen DeGeneres