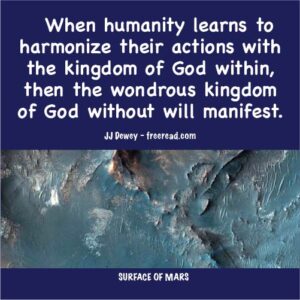 I previously pointed out that the splitting open of the tomb of Christ, resulting in the resurrection, corresponded to nuclear fission. Now I am asked if there is also an example of fusion.

This is good food for thought and one of the few we have not dealt with before. The difficulty in finding some correspondences is that they are not exact because the mind of God is always creating “all things new” and different. But when the true correspondence is pointed out, it is always recognized by the soul, a light is turned on and great seed thoughts begin to take root.

The most common fusion, as scientifically understood, takes place when four atoms of elementary hydrogen are sufficiently pressurized to combine into one helium atom. This process releases a substantial amount of energy. It is believed that the Sun is powered by the fusion process occurring at its core. Heavier elements are believed to be created in the more massive stars.

Fusion occurs in the atomic world or the microcosm. Where does it occur in our world, the macrocosm?

The answer is interesting. Fusion occurs when life in the macrocosm progresses from one kingdom to another. It takes many atoms to make one cell of organic life. Then it takes many plants to fuse into one life in the animal kingdom and it takes numerous animal lives to create one human – and it does not stop there. The next kingdom, the kingdom of God is created through the fusion of numerous human lives into a shared group mind.

If we are looking at the form only they are partially correct. I say partially because the form is touched and affected by the fusion, but the form is not where the core fusion takes place. Fusion in the kingdoms occurs in the evolving lives rather than the form which they occupy.

Numerous elemental lives of the mineral kingdom fuse and form the basis for the plant kingdom. Just as in atomic fusion there is a creation of energy even so this plant creation manifests a fuel that is stored in them which is used for food and burning by the higher kingdoms.

An animal eating a plant does not represent the next fusion process, but the generated heat creates the higher correspondence of the pressure which causes the many plant lives to compress until numerous plant lives fuse into one animal life and is born anew in a higher kingdom.

These new fused lives start out in the insect kingdom with a new evolving life controlling many of these tiny lives. These group lives evolve into greater animal lives and at the end of animal evolution another fusion occurs to create a self-conscious human life. Finally a number of human lives fuse to create a group mind in the kingdom of God.

The Molecular Relationship creates the vehicle for the Kingdom of God, but spiritual fusion creates the greater life.

My writings on the beast have generated some interesting responses. One of most unusual was one questioning as to whether I have become a symbol of the beast to some.

I think authority in relation to the Beast needs clarified here. Authority by itself is not the Beast. Authority has a positive side and is used by all servers from the Hierarchy of light on down. The Beast is powered by unearned and unjust authority (that takes the place of the God within) and is blindly obeyed through fear or complete thoughtlessness.

I don’t think anyone in the group follows or obeys me because they fear me, or obeys me without thought. For one thing I do not seek obedience.

Let’s go back the analogy of the two Spanish teachers. The first is appointed and approved by a powerful board to teach one class and another is rejected by the same board and not allowed to teach through the school system. This second one runs a small ad and attempts to teach a class in his home.

Now Jim wants to learn Spanish and decides to check out the two teachers for he wants to learn from one who actually knows the language well. He takes an Hispanic friend along with him, visits the first teacher and says:

“I want to learn Spanish, but want to make sure you are a qualified teacher. Therefore, I would like my friend to ask you some questions in Spanish to test your ability.”

The teacher looks back in alarm and replies, “How dare you question my ability. Do you know who I am? I am not only authorized by the powers-that-be to teach, but I have certificates to show you that I am more than qualified.”

“That’s fine,” said Jim, “but I just want to know if you can actually speak it correctly so I can be assured I will learn it well.”

He responds, “My reputation speaks for itself and I do not have to prove myself. Now get out of here or I’ll have you banned from all classes in this school forever.”

Jim leaves, but then pays a visit to the second teacher. “Why do you tech from your home?” he asked. “The other teacher we visited had magnificent settings provided by the powers-that-be.”

“The teacher replied, “I am not accepted by the powers-that-be so I have to work with what I have.”

“The most important thing is that you have a good working knowledge of Spanish,” said Jim. “Would you care to demonstrate your knowledge by having a dialog exchange with my friend?”

“I would be happy to,” said the teacher. He then proceeded to carry on a conversation with Jim’s Spanish-speaking friend. After a few moments Jim asked his friend how the teacher did.

“He did great,” said the friend. “He speaks flawlessly and with a perfect accent. This man will know of that which he teaches.”

Jim therefore selected the second teacher and enjoyed learning from a tested authority. Each time the teacher taught him a new element of the language Jim found he did not have to consistently test or question his authority, but as he progressed in knowledge, he did apply tests from time to time to make sure the teacher was adept in the higher grades of the language.

The first teacher used the unearned authority of the Beast. The second used a legitimate authority which he demonstrated and was not a part of the Beast – neither were his students under the power of the Beast in this particular area of life.