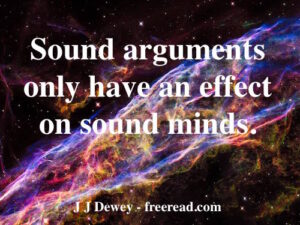 I was asked as to how we respond to people who take the Bible literally and preach to us about our behavior – like telling us that we need  to ask God  for guidance even in small things in our lives.

So how do we deal with someone who is relying on an outer God?

Do we preach the inner?

We can but in almost all cases it will do little good.

What do we do then?

Unfortunately, the only way to influence them is to use the authority they accept. In this case it is the scriptures.

On the other hand, the good thing about using the scriptures as an authority is that they are a much better, more reliable authority than any preacher telling you what to believe. Still, they are far from infallible and our ability to interpret them correctly is more fallible still.

So, what do you do when challenged by a believer to prove something from the Bible? If you are not well versed in the Bible throw their words back at them.

In your case say: “Where does it say in the Bible that I’m supposed to bother God with the trivial details of my life?”

Now the shoe is on the other foot. She must now prove her point. Most of the time the person will be unable to and you can just say:

“Well, if the Bible does not support your view then why are you preaching to me about it?”

“It looks like the Bible says nothing contrary to what I am saying.”

Then there is a chance she may quote a scripture. In this case you can just look at it and give your own interpretation.

For instance, she may say: The Bible says “Trust in the LORD with all thine heart; and lean not unto thine own understanding. In all thy ways acknowledge him, and he shall direct thy paths. Be not wise in thine own eyes: fear the LORD, and depart from evil.” Proverbs 3:5-7

You can then take the scripture and defend your point of view with it.

“I personally trust in the Lord to give me the wisdom to make trivial decisions without bothering him with little details. Trust is an attitude like prayer. The scriptures says to ‘pray always’ but no one literally does this. One can, however, always have a prayerful, as well as trusting, attitude.”

You’ll find that you can argue well with any expert, even if you know nothing about a subject if you just take the initiative and force the other person to answer questions while you only answer what you please. Then you can take the data that he brings up and use it as reason directs.

Incidentally a scripture you could have used was the parable of the talents. The man who buried his talent and did not put it to use was condemned as slothful. Those who put the talents to use without asking the master for approval of all the details were rewarded.

I have read quite a few ideas from dreamers who wish to create a new country. A number of them have already written a new Constitution. Some of them are a little scary – one guy even wants to be a king.

One thing we will want when a new society is formed is maximum freedom combined with maximum prosperity.

Let’s throw this out for comment from the group.

If you could have your way in the creation of a new country what are the three main ingredients you would write into a new Constitution, structure or law that is lacking in the nations of the world today?

We received some interesting comments on this assignment. We could probably spend six months talking about them but I’ll just briefly give my views.

Here are my three.

If we ran the whole country as a molecular business then there would be no taxes, but everything necessary for the common good would be financed from company profits.

If it were set up on the standard basis then we should be able to run the government on a tithe or 10%. I think this should be done with a 10% sales tax as the only tax.

With a little training, laymen could do many expensive services done by professionals.

Treating people for minor illnesses, many disputes that now require lawyers, some psychological help, counseling and many other services could be done for free by regular people who are willing to donate some of their spare time.

Such a volunteer system could result in enormous savings to the people.

Question: Suppose we were to create a new country with a new government and society.

What do you suppose would be the three main problems we would encounter and how would we solve them?

Why does the Air Force need expensive new bombers? Have the people we’ve been bombing over the years been complaining? George Wallace