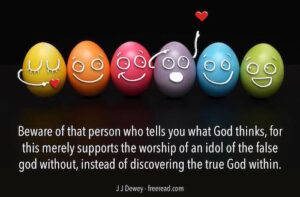 Taking the Place of God

Now let us look at the meaning of verse three as it applies to the initiate and his group. When the group begins their work a beastly unjust, unearned authority encompasses them. The new project or teachings initiated will break the old molds of thinking and will allow freedom of thought that runs contrary to the powers that be. The head of the Beast that seeks to control them is wounded as it were to death. It seems for a time that the group has broken away from the false authorities of the world and is moving ahead in an atmosphere of freedom.

Then a new generation of leaders comes along which doesn’t understand the difference between earned and unearned authority as well as the free flow of independent thinking and expression. These leaders appoint, or manage to include, others who embrace beastly authority and soon the group is as tightly controlled as any other organization dominated by the Beast. It is only a matter of time before the deadly wound is healed and even the members of this supposedly enlightened group wondered after the Beast and worship the dragon from which it gets its power.

“…and they worshipped the beast, saying, Who is like unto the beast? who is able to make war with him?” Revelation 13:4

When a person mistakenly accepts a human image or book as an ultimate authority he puts this engraved image in the place of God, giving it the authority of God and will indeed see this authority as divine so he will not be able to make war with it.

A dedicated and courageous person is often willing to give his life in war against even the most powerful of enemies. Hitler, for instance was a very powerful man, but still people were able to make war with him.

On the other hand, the Beast is so powerful that those who worship it will not be able to make war with it no matter how courageous they are.

Because they will see it as being the same as making war against God.

Find a Christian or Moslem who sees their scriptures as the infallible word of God and quote a scripture to them that seems negative and ask them if there is something wrong with it.

Such a believer will almost turn pale at the thought and will not consider questioning the scripture no matter how outrageous it may sound. In their mind they might as well be revolting against God.

Even if you quote scriptures that support putting a rebellious child to death, the killing of gays, or women being commanded to be silent in church they will be terrified at even entertaining the thought that there could be something wrong with what has been written by the supposed finger of God.

If their leader is a pope, prophet or priest who speaks for God the believer will not consider making war against his words for in the follower’s mind it would be like challenging God.

“And he opened his mouth in blasphemy against God, to blaspheme his name, and his tabernacle, and them that dwell in heaven.” Revelation 13:6

During the three and a half cycles the unjust authorities blaspheme God by taking the place of the divine. They blaspheme his tabernacle by corrupting the work of the initiate. Finally, they blaspheme them that dwell in heaven by not allowing followers to ascend to higher consciousness (heaven) to discover the true source of knowledge and authority.

Question: Are there any groups that have continued in or even increased in light beyond the first generation? If so, how did they do it?

I do not know of any presently existing. The Molecular Relationship is designed to be self-correcting like a living organism. Once successfully established this will be the first organization that does not deteriorate and become corrupted.

The next scripture to consider:

“And it was given unto him to make war with the saints, and to overcome them: and power was given him over all kindreds, and tongues, and nations. And all that dwell upon the earth shall worship him, whose names are not written in the book of life of the Lamb slain from the foundation of the world.