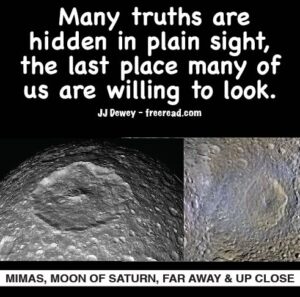 I was asked if there is any truth behind the conspiracy theories. I’ve written quite a bit about this. If you look up the word “conspiracy” in the archives you should find some material on this. Even so I’ll cover a few basics in a nutshell.

The most important thing to understand is the conspiracy of darkness is not headquartered in the physical plane.

Paul understood this when he said: “For we wrestle not against flesh and blood, but against principalities, against powers, against the rulers of the darkness of this world, against spiritual wickedness in high places.” Ephesians 6:12

The problem is that the conspiracy people have always looked for the problem where it is not rather than where it is. They look for it among the “flesh and blood” and blame the Jews, the bankers, Bush, Clinton, the CFR, the U.N., Communism, Bilderbergs, Rockefellers, the Illuminati, the occult, etc.

The reason that so many are accused of being dark conspirators is that the true conspiracy is a moving target and has worked to some degree through almost every organization and people in our history.

Where the conspiracy is working in the present is only clearly seen by a few. After a generation passes it is seen by the many. Then the many make the mistake of seeing evil where it is not. While the conspiracy has moved on to a new group or territory as its focus of power the masses miss this and see evil where it was in the past and miss its location in the present.

For example, the powers of “spiritual wickedness in high places” shifted its attention to Hitler and Germany in the late 1920s. From this point until the beginning of World War II there were only a few who saw them as a focus of evil. One of the few was Winston Churchill who received a soul impression the first time he heard Hitler’s name. He sensed a great danger to the world immediately and spent seven years trying to warn the world. He was a laughing stock in Britain until Hitler invaded Poland. Then they turned to him for leadership.

Sure there were quite a few before the war who saw Hitler as a bad guy, but there were dozens of bad leaders in the world and he was no more to be feared than any of the rest, so they thought. Most leaders thought that if they dealt with him diplomatically that he could be handled and controlled.

Now a generation has passed the masses see the situation for what it really was – that the powers of darkness did indeed work through Hitler and he was a great threat to the world just as Churchill had warned.

Now people see anything that reeks of Nazism as evil. The Aryan Nations (who have Nazi beliefs) moved their headquarters to Northern Idaho some time ago and almost everyone in the state was greatly alarmed and did everything they could to destroy the group. The group suffered harassment and lawsuits until it was destroyed financially and the compound leveled. Many thought they had destroyed a great evil.

The truth is that these people (who numbered about 50 hard core followers) were no more a threat than some inner city gang of kids. They were not going anywhere. The true conspiracy had moved away from this failed attempt to a new one right after the war.

The new focus was on Communism, its socialistic philosophy with totalitarian implementation. This was empowered through bankers and powerful people who worked behind the scenes. The main focus was the Soviet Union but the dark energy gravitated wherever it could find a response and there were many agents of the conspiracy in the United States and Europe seeking to overthrow the free world.

Again, Winston Churchill saw the danger. It was he who coined the term “Iron Curtain” in reference to the Soviets and again he was ignored.

Another person who saw the danger was Joe McCarthy and in his attempt to expose the conspiracy he became vilified as bad or worse than Hitler. He made some mistakes, but each person he accused as being a communist conspirator turned out to be one as revealed by new records released in Russia after the fall of the Soviet Union.

There must be a dozen movies out portraying the guy as an epitome of evil, but such is the fate of one who takes on the true conspiracy.

A group who saw many elements of the conspiracy was the John Birch Society. This organization was also hated just as Joe McCarthy was. I majored in political science in the sixties and the professors hated the Birchers with a passion. I worked on the university paper and everyone there made fun of the Birchers.

The truth is the Birchers were hated and received such bad press all over the nation because they obtained some insights to the conspiracy and sought to expose it.

BUT after the fall of the Berlin Wall the Dark Brothers changed their focus of attention away from Communism and toward greener pastures. After this shift occurred the powers that be no longer focused attack on the John Birth Society because they were no longer a threat. They were now looking for the conspiracy where it used to be rather than where it now is. Now they are often taken in and manipulated by the conspiracy.

In addition there are many break-offs of the Birchers and similar groups who still see the conspiracy as a behind the scenes Illuminati seeking a new world order. This was attempted and failed through the Soviet Union. The conspiracy has moved on.

Now in 2006 the conspiracy operates through the disaffected in the Moslem world. Unlike Nazi Germany and the Soviet Union there is not a single country that we can identify and fight against, though Iran is receiving some attention. Instead the conspiracy has attached itself to many thousands of disaffected Moslems that have an amazingly similar mindset – almost as if they all came from the same school.

Because this is where the conspiracy is, explains why Bush has encountered such great friction in fighting it. Whoever goes against it will be “hated of all nations.”

In theory, there is no difference between theory and practice; In practice, there is. Chuck Reid