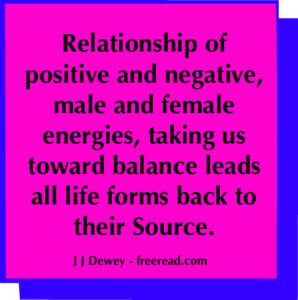 I believe I have covered this subject but will go over some points again here.

In the molecules it will be important that men are unified with men, men with women, and women with women. However, the fact that they can be unified through the soul has little to do with the fact that their male/female energies are in balance. The energies I was referring to in the quote were the balance between personality and soul energy, which is an entirely different thing than the male/female energies in physical form.

Two people can be in near perfect balance with their male/female energies yet lack soul contact and have a terrible nitpicky relationship.

Even so, those who achieve close to the zero point in their energy will gravitate toward peace with much less resistance than those who are out of balance electrically.

Before I state why the male/female balance is important let me state first what it is not.

With rare exceptions the person in a male body has a male charge and a person in a female body has a female charge. Now if we rate individual charges between plus or minus ten or less the male gay is usually a plus one or two and the female is usually a minus one or two. Therefore, two gay males have the same problem in pairing up as two straight males. If you have one gay with a charge of plus one and another a two, you wind up with an average of plus one and a-half.

If you have two hetros who are great friends one with a plus eight and one a plus six you wind up with an average of plus seven.

Both couples have the same problem in different degrees, in that the two couples wind up with a surplus positive charge and do not electrically balance each other off even though both couples may have a great relationship and all four have soul contact together.

Some do not seem to realize that many relationships within the molecules will be completely non-romantic in nature. Many will have a molecular partner for the work and then another partner for romance.

The gay with soul contact has two choices. He can select a female partner with a low female charge opposing his low male charge or he can join as an associate, linking with one of the male/female couples. These options are also available to heteros.

The group must achieve four things to activate the human molecule.

I don’t recall talking about documentation, but probably the best book about the stage of the conspiracy before the fall of the Berlin Wall is, None Dare Call It Conspiracy. I found the text of this on the web. It can be found here:

This book was the best seller of its time selling more than five million copies. Even so, it received not one mention in the New York Times or any other major paper and received no book review.

This fact alone testifies that someone wanted the information suppressed.

The funny thing is that the book did its job and exposed some of the dark plans. But the Dark Brotherhood, the true conspirators, moved elsewhere when the public consciousness was awakened. Now the conspiracy people are looking for the center of conspiracy where it was a generation ago while the center of power has moved to terrorism from Muslim fanatics.

If the terrorists are defeated, or at least controlled, the dark conspirators will shift again. The next move could be to China, back to the bankers, new centers of communism or even Israel if it gains too much power in the Middle East. The key for conspirators is to find leadership of like vibration that they can impress with their thoughts. This is a secondary reason why they need to shift focus. When a sinister generation of conspirators dies off, they are often replaced with people who just want to get along in the world. This is what happened with many in the subtle financial empires. Some behind the scenes organizations who wanted to control and take away freedom in the past are now just interested in making lots of money, and even providing some service to the world.

Right now the Dark Brothers are working through a triangle of leaders. They are Osama bin Laden’s group, Mahmoud Ahmadinejad, President of Iran and in the Western Hemisphere Hugo Chavez from Venezuela. Even though Chavez is not a Muslim he is being used as a trouble maker to add support to the terrorists. Kim Jong-il from North Korea also is on the back burner to be used when expedient.

Some ask if there is a counter conspiracy by the Brotherhood of Light. Indeed they do work behind the scenes and seek to influence many for good. But this is not a conspiracy on their part on the same order as the Dark Brotherhood.

The main difference is this. The Dark conspirators seek through conspiracy to impose their will upon humanity by force and if we knew all their plans average humanity would be repulsed and terrified.

On the other hand, if we knew the objectives of the Brotherhood of Light the hearts of the pure would rejoice for they seek the enlightenment, progress and liberation of humanity.

If I have ever made any valuable discoveries, it has been owing more to patient attention, than to any other talent. Isaac Newton (1642 – 1727)