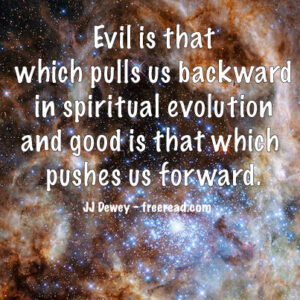 Question: Can evil exist without ignorance?

This is a very concise and though provoking question.

First, we must define what evil is. Admittedly there are several definitions floating about and the answer may vary according to the one you pick.

The one we use in this group (and hinted at by DK) gives the core principle behind good and evil. It is this:

Therefore, for evil to exist without ignorance a person would have to deliberately choose that which takes him on the path of retrogression. About the only way such a choice could be made was if the person were insane, but if he were insane, he is probably not aware that he is choosing something truly harmful to himself and is still suffering from ignorance.

Except for insane people, each person chooses that which he believes to be in his overall best interest. He may be wrong, and humans often are, but he sees his choice as his best one.

But how about people who take drugs or do other harmful things? Surely they know they are making a bad choice.

Not necessarily. It is true that most realize that taking drugs is destructive, but they would not take them if they did not have their benefits. In the mind of the addict the high they get from the drugs is more of a benefit than the negative effects are a detriment. Because the positive outweighs the negative in their mind they take the drugs, in other words, they are still acting in their perceived best interest.

In reality they are following a path of retrogression or evil because of ignorance. When their ignorance is replaced with sure knowledge and understanding they will make the right decision, one that is really in their best interest.

In conclusion I would say this. No. Evil cannot exist without ignorance. When ignorance is removed the vision of what is in our best interest, as far as progression goes, becomes clear and the right decision is made. In other words, when ignorance is left behind the path of progress is always chosen. This reveals to us the importance of light and knowledge.

A reader pointed out that on a mental level drug addicts are not ignorant of the evils of dru addiction.

The subject wasn’t about being ignorant of evil.

Can evil exist without ignorance?

To this my answer was no.

He is making a faulty judgment out of ignorance. He is not seeing the whole picture but just looking into the immediate future. If he understood the full consequences he would quit.

Both people who are mentally and emotionally polarized have been addicted to drugs and quit when the big picture became clear to them. A clear understanding of danger can bring forth the resources to rouse the self-control to handle the situation.

My point still boils down to the simple principle of pain and pleasure, ignorance and full awareness.

When the addict started with drugs he was usually just seeking pleasure. If this evolves into seeking escape, what does he want to escape? Pain. To go away from pain takes one toward pleasure. Pain and pleasure or the dualities always enter in.

As I said before the addict has a knowledge of many of the bad consequences of his behavior and for short periods, he may say to himself that he is not going to take the drugs again, but then the overwhelming desire returns and he puts this reasoning out of his mind. Because the consequences are placed outside of his consciousness, he then takes the drugs in a moment of ignorance.

When the addict overcomes, he forces himself to not be ignorant but keeps the awareness fresh in his mind of the pros and cons of his behavior. When he does this he will have power to overcome.

I am free of all prejudice. I hate everyone equally. W. C. Fields