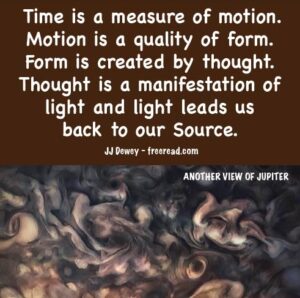 A reader quotes me as follows: “You cannot even imagine what it would be like to be beyond time and space …”

JJ: Pure thought would be formless, beyond time and space, yet has power to create all forms.

Let’s look at the popular Big Bang theory. Such proponents believe that 13.8 billion years ago there was no universe, that everything there is resided in what is called a singularity. This is a point infinitesimally small. In such an existence there would have been no motion for there was nothing to move. With nothing to move there would have been no time because time is created by motion.

If this theory is true then at this time (for want of a better word) there was no time or space. Even so, something had to exist or the universe could not have been created because something cannot come out of nothing.

Time and space as we know it exists in our physical universe. It does not exist in other realms as it exists here. Time is different, for instance, in your dream world. During one night you can start by dreaming of space ships in the future and then end up in another dream in the days of Columbus. You’ll also notice that you never exactly measure time there as you do in the physical.

Time in the astral world is something like it is in the dream world.

Since time is created by motion one must see what is moving in the higher spheres to determine how or if time exists there.

Time in the mental world is more flexible still and is molded by thought images in motion.

In the formless worlds time exists as an idea or concept that manifests in the lower worlds, but the passing of it does not affect the reality there. Use your imagination to enter the world of ideas and attempt to see time and motion in such a world. Then we can get a vague idea of how much different the idea of time is there.

Reader: Or time still goes on in the lower worlds at a different rate, and perhaps time goes on so slow that it seems as if there is no time? Don’t know, but the idea of existence outside of time makes no sense to me, and I don’t believe it actually makes sense to anyone.

JJ: There is time in the mental, astral and physical worlds because there is motion there, but it operates much differently in the three different worlds.

If our consciousness were to go to the formless worlds there would be no registration of the passing of time, even though it would continue to pass here.

Time and space are interesting ideas to contemplate.

Reader: “Let’s look at the popular Big Bang theory. Such proponents believe that 14 billion years ago there was no universe, that everything there is resided in what is called a singularity. This is a point infinitesimally small. In such an existence there would have been no motion for there was nothing to move. With nothing to move there would have been no time because time is created by motion.”

If I recollect correctly you don’t believe in concepts of an infinite regress, as in calculating an exact value for a transcendental irrational number. But you find it convenient to believe in an INFINTESIMALLY small singularity?

You’re putting words in my mouth. I didn’t say I believed in it. My belief was extensively put in writing in Book 4 so most here should be aware of my belief on the singularity. In the book the singularity was so small that some would call it infinitesimally small, but technically it still has size. Since all life there is asleep and attempting to establish consciousness in our universe there is no one there to register time, space or form which oscillates between spirit and matter.

The Big Band theory accepts the possibility that the singularity could be infinitesimally small but they do not know. They also consider it could just be very small.

Reader: You can’t even talk about formlessness without using a contradiction in terms. You talk about a time when there was no time. Do you not see the humor in that?

JJ: You are missing my point. If the universe is reduced to a singularity (whatever size it is) and we have no form, space and movement in which to register in consciousness then there would be no time for us. Time must have motion of form registered by consciousness to exist.

What contradicts? If there is no motion of form to register in consciousness then there could be no time – at least not time as we define it here.

Reader: One other thing also – isn’t the Big Bang Theory another example of the “perfect logic” of physics reaching an absurd conclusion?

JJ: Here is the logic of the Big Bang Theory.

Since all galaxies are moving away from each other in a fairly uniform manner, as well as analysis of background radiation, it appears from calculations of current data that the whole universe began at a single point. Many thus theorize that the beginning point was small beyond our imagination. It is recognized that this beginning point is just a theory and could change with new data.

It is indeed a strange conclusion, but is supported by a lot of evidence.

Einstein rejected this at first but later accepted it calling his rejection his greatest mistake.

Reader: Do you believe in infinity or not?

JJ: It has some meaning as a theoretical mathematical point but I do not believe it exists in reality for everything has a number. I prefer the term “unlimited” instead.

This doesn’t really contradict the original principle I was teaching but gives additional light in my opinion.

I have said we incarnate into time, but when we are not in it, time does not exist for us because there is no motion to register in our consciousness. If motion still exists in the lower worlds, then time is still going on there and will have passed when one incarnates into time again.

Whether physical motion and time are going on in the singularity would require a straining of words to argue about, but no consciousness would be registering time there.

I prefer the company of peasants because they have not been educated sufficiently to reason incorrectly. Michel de Montaigne (1533 – 1592)