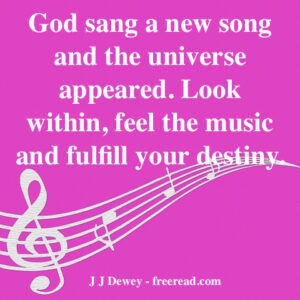 Next let us examine the first three verses as a whole:

“And I looked, and, lo, a Lamb stood on the mount Sion, and with him an hundred forty and four thousand, having his Father’s name written in their foreheads. And I heard a voice from heaven, as the voice of many waters, and as the voice of a great thunder: and I heard the voice of harpers harping with their harps: And they sung as it were a new song before the throne, and before the four beasts, and the elders: and no man could learn that song but the hundred and forty and four thousand, which were redeemed from the earth.” Revelation 14:1-3

The 144,000 not only stands for an internal manifestation of energies, but also an external one. Externally, it is a symbolic number of seekers who correctly see and follow the teachings of the initiate over the period of an astrological age of about 2160 years.

144,000 may seem like a large number but it is quite small in relation to the number of followers. For instance, there are over two billion Christians on the earth today and over a billion more who have passed on. If we divide 144,000 into 3 billion we see that less than one in twenty thousand followers become one of this group.

This illustrates a principle and it is that only one in thousands among the followers of an initiate sees the true original vision and follows the true spirit of the founding words and works. Only a small number escape the power of the unjust authority of the Beast and find the Father’s name inside their own minds and hearts.

“And I heard a voice from heaven, as the voice of many waters,”

When one sees with the same vision as the Christ, the Buddha, Confucius or any other initiate he receives revelation from the realm of Spirit. It is as the voice of many waters because in the midst of many waters, such as a great waterfall, all other sounds are drowned out. Only the overpowering sound of the water can be heard. Even so, when the disciple hears the inner voice correctly, even though it is very quiet, a focus upon the message drowns out all other distractions so only the message is heard.

“…and as the voice of a great thunder…”

Again the thunder signifies an awakening of the follower to a new realization of purpose and spirit.

“…and I heard the voice of harpers harping with their harps:”

The beautiful music signifies the tuning and focus of the mind and heart of the seeker so he is in harmony with the will and purpose of God.

“And they sung as it were a new song…”

The power to sing the Song is achieved through the previously mentioned items:

[1] The disciple receives revelation or light and truth.

[2] The revelation awakens him to a new state of consciousness.

[3] This brings him into harmony with higher will.

When this trinity of achievements is accomplished he sings a “new song.” He sees the world and other people in an entirely new way. Words can be given out (such as The Song of the 144,000 below) that can direct the mind and heart toward this consciousness, but the Song is more than words. The true song is sang through the attunement and the harmonious vibration given off by the seeker. The true disciple may be sitting still and silent, yet singing the Song with his radiating being.

Let me repeat here the Song of the 144,000 given out in my book, The Immortal. This is designed to lift up the hearts, minds and purpose of those who are ready so the Song can be sung.

That you have revealed to us your protective universal light;

That within this light is complete protection from all destructive forces;

That the Holy Spirit of Your Presence permeates us in this light,

And wherever we will the light to descend.

That you fill us with your protective fires of love;

That the consciousness of Christ is lifted up in us in this love,

And wherever we will the love to be enflamed.

That You are in us and we are in You;

The scripture continues: “…before the throne, and before the four beasts, and the elders:”

When the higher consciousness is achieved the vibration of the Song radiates throughout the mind (the throne) the lower self and the emotions follow it (the four beasts) and the wise people (elders) of the earth acknowledge the wisdom of the disciple.

”…and no man could learn that song but the hundred and forty and four thousand, which were redeemed from the earth.”

The earth stands for the lower nature and the concrete mind. To attain the vibration of the Song one must be redeemed from the carnal mind and be dominated by the spiritual.

“And in their mouth was found no guile: for they are without fault before the throne of God.” Revelation 14:4-5

The Virgins of God

The 144,000 is a symbolic number symbolizing the small percentage of followers who see the vision of the initiate as well as a symbol of the perfected energies which flow through the perfected disciple. When all the energies and notes vibrate in harmony the Christ, or soul dominates the lower self.

“These are they which were not defiled with women; for they are virgins.”

This is a prime scripture used by the Catholic church to justify the idea that the priests, as well as the hierarchy, need to be celibate.

The only trouble with this interpretation is it opposes the general teachings of the New Testament about Marriage.

Here are the words of Jesus:

“And he answered and said unto them, Have ye not read, that he which made them at the beginning made them male and female, And said, For this cause shall a man leave father and mother, and shall cleave to his wife: and they twain shall be one flesh? Wherefore they are no more twain, but one flesh. What therefore God hath joined together, let not man put asunder.” Matthew 19:4-6

“Marriage is honourable in all, and the bed undefiled.” Hebrews 13:4

In fact Paul spoke against celibacy:

“Now the Spirit speaketh expressly, that in the latter times some shall depart from the faith, giving heed to seducing spirits, and doctrines of devils; Speaking lies in hypocrisy; having their conscience seared with a hot iron; Forbidding to marry, and commanding to abstain from meats, which God hath created to be received with thanksgiving of them which believe and know the truth. For every creature of God is good, and nothing to be refused, if it be received with thanksgiving: For it is sanctified by the word of God and prayer.” 1 Timothy 4:1-5

Virginity, however, is written as being praiseworthy before marriage, but the main marriage spoken of in the scriptures is the marriage to Christ. A famous scripture about this is the parable of the five wise and five foolish virgins waiting for the bridegroom. The ten virgins waiting to be married to one man is generally interpreted as disciples waiting for the presence of Christ rather than a major polygamist taking ten wives.

“For I am jealous over you with godly jealousy: for I have espoused you to one husband, that I may present you as a chaste virgin to Christ.” 2 Corinthians 11:2

Whether it be symbolic marriage or real physical marriage a disciple is considered a virgin before God if he has no spiritual intercourse with false gods. And who are the false gods?

To answer this: we must realize that this scripture follows the chapter on the Beast because the Beast robs the seeker of his spiritual virginity. How does he do this?

The Beast represents an outward authority who takes the place of God and when a seeker is deceived and unites his feelings and thoughts with the outer rather than the inner God he becomes corrupt and is no longer a spiritual virgin who can unite with the Christ consciousness. The true virgin spoken of here may indeed be physically married, but will have no other gods before him except the inner voice. He will be awaiting his inner spiritual marriage, having not yielded to the outer voices.

“These are they which follow the Lamb whithersoever he goeth.”

When the disciple dedicates himself to the inner voice, he will follow the direction of the Christ consciousness wherever it leads.

“These were redeemed from among men, being the firstfruits unto God and to the Lamb.”

“Redeemed” comes from the Greek AGORAZO which is usually translated as “bought or purchased.” The orthodox interpretation of such a purchase is that Christ purchased us with his own blood and therefore owns his virgin disciples. To find the inner meaning we must realize that blood is a symbol of life. The life of the inner Christ descends from the higher worlds of Spirit down to our physical consciousness. This painful descent where spirit is crucified by matter is the payment the inner Christ makes to contact our carnal consciousness and unite with it, or take it as its bride. Eventually the inner and the outer become one with the Father and follow the higher will of God.

“And in their mouth was found no guile: for they are without fault before the throne of God.”

When the disciple is married to, or unites with his Christ consciousness, he can speak no deceit while in that state. The God within is blameless and thus the disciple who is one with his inner God is also blameless when he follows the direction he receives.

It’s been some time now – since November 1998 –  and some may not be aware of how the Keys began, but Rick Audette is indeed the initial founder of this group. He read the book (The Immortal) and was enthusiastic about starting a forum. I thought at the time it would be a good idea for the future, after I got some more books written, but told him to go ahead anyway – that I may just post once in a while. I suggested the name Keys of Knowledge and then he came up with the “Keysters” tag for us.

When my wife learned of the plan she said, “You won’t be able to just post once in a while.” Well, it turns out she was correct. I was drawn into teaching pretty much on a daily basis.

The result has had positive and negative effects, but mostly positive I believe. The negative is that I have not gotten as much written on the books as I planned. The positive is that I have gotten much more material written through the Keys than I would have if I had merely concentrated on the books. Some of the material I have given out was planned for future books, but a lot of it is material that would have not been presented through them.

I receive a lot of appreciation from people who read the archives and I think many of the writings will stand the test of time. For generations to come many will be glad that Rick prodded me to agree to a forum such as this.

It’s so much easier to suggest solutions when you don’t know too much about the problem. Malcolm Forbes (1919 – 1990)