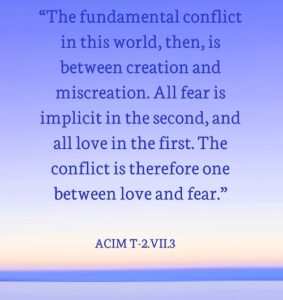 ACIM Conversations, Part 25
Creation vs Made

Student: I’ve been getting a lot of grief among students over my use of the word “creation.” If I use it referring to anything in this world, they correct me and tell me that everything here is “made” not created.

Teacher: Yes, I know, some who are very black and white will correct you even though your English is correct, and it is obvious what you are saying. Can you give me an example of a correction?

Student: I could give you several. The other day I mentioned something about the creation of the universe we see about us and I was jumped upon with a correction telling me that this world was “made,” not “created,” and this isn’t even the real universe. Then I was talking about the creation of some new offerings by Apple and was corrected again telling me that all Apple products are “made,” not created.

Teacher: Do you think the students understood what you were saying?

Student: I’m sure they did.

Teacher: Then they need to take the Course’s advice: “To communicate is to join and to attack is to separate.” T-8.VII.12 Are you familiar with the Course’s differentiation between “create” and “made?”

Student: I think so, but will be interested in your comments.

Teacher: Why do you suppose they corrected you?

Student: I felt like they were just trying to demonstrate a superior knowledge of the Course.

Teacher: Yes, and it is a problem that some are more determined to be technically correct than in understanding each other with real communication. Read this extract as it is perhaps the most common one to stress the difference in the two words:

Student: “A clear distinction between what is created and what is made is essential. All forms of healing rest on this fundamental correction in level perception.” T-2.V.A.12

Teacher: Here it seems to stress the importance of understanding the difference in the two words, but now read the same text before it was edited:

Student: “Clear distinction between what has been created and what is being created is essential. All forms of correction (or healing) rest on this fundamental correction in level perception.” OE Tx:3.5

Wow! In the original edition the word “made” is not even used. When it talks about “what has been created,” what does it mean?

Teacher: It is referring to miscreations of the past here in this world that cause our problems. They need to be replaced with correct creation the Course refers to as the “miracle.”

Student: So, instead of “made” Jesus himself in his original dictation used the word “created” in referring to what has been made in this world. I wonder if those critical students are upset at Jesus when they read the original.

Teacher: I wouldn’t bet on it, but one can see where they have made the distinction because the Course often uses “creation” in reference to eternal things and the word “made” in relation to the temporary things of this world, but just as you may use the word “create” sometimes in reference to this world so does the Voice in the Course. In fact, there are 27 times the Course refers to things made in this world as “miscreation.” Here is one for you to read.

Student: “The fundamental conflict in this world, then, is between creation and miscreation. All fear is implicit in the second, and all love in the first. The conflict is therefore one between love and fear.” T-2.VII.3

Teacher: It is interesting that “miscreation,” or things made in this world, has the word “creation” in it. If nothing else, this illustrates the impracticality of insisting that creation must only refer to what God directly makes. Read this quote in the original text:

Student: “The acceptance of the Atonement by everyone is only a matter of time. In fact, both time and matter were created for this purpose.” OE Tx:2.47

Teacher: Time and matter belong to the world, not heaven, and here it says they were originally created. Time and matter are a part of the dream also indicating the original dream state was an idea created by the Godlike powers of the Son for an idea is eternal and cannot be destroyed.

Student: Now I do not feel so bad for using “create” in reference to some things in this world.

Teacher: This problem just illustrates the importance of looking at the context of what is said and seeking to understand rather than insisting on some literal accuracy being always applied.

That said, it is helpful for Course students to understand the general distinction it makes between “creation” and “made.” First, can you tell me the difference as seen by the general public using dictionary definitions?

Student: I’d say that when you create something you are putting together something new, like Edison did with the light bulb. Since then, many have made light bulbs. We make things by duplicating the original idea.

Teacher: Is this how your student friends used these words when they corrected you?

Student: No. They tell me that create is to only be used in relation to something eternal that God makes and is not to be used in reference to anything in the world

Teacher: So, using this definition then we would have to say that Edison made the light bulb.

Student: Yes, with this definition there would be no differentiation between what Edison did and what a manufacturer does in copying it, for they are both done in the world.

Teacher: And this points us to an important key in understanding the Course. It sometimes usus a definition of terms peculiar to itself, and if the student is not aware of this, he may not fully understand what is being said. For instance, we talked earlier about forgiveness and how its meaning in the Course differs from the dictionary.

Student: So exactly what would be the definition of creation according to ACIM?

Teacher: The Course tells us that true creation involves extending that which is eternal, basically anything that has an end is considered being made, not created. God creates by extending Himself in creating additional sons through sharing. The idea of sharing is an essential ingredient in the process as noted here:

“You cannot separate your Self from your Creator, Who created you by sharing His Being with you.” T-7.V.6

Basically, true creation, according to ACIM, is the complete sharing of everything that is eternal. We are told that we cannot fully understand this until we return to our eternal state.

Are there any other areas where you are receiving correction?

Student: Yes. This one concerns the body. When I mention something that seems to indicate that I am in this world functioning in a body someone pops up and lectures me, telling me that I am not a body

Teacher: Do you believe you are a body?

Student: Of course not. ACIM makes that very clear

Teacher: Then why do they accuse you of thinking you are a body?

Student: The problem comes when I mention any experience that involves a body. They somehow twist that into my believing that I am a body. In reality, it is almost impossible to have a conversation about any experience in this world without involving the body.

Teacher: Indeed. ACIM tells us that there is no form or bodies in heaven, but here in dreamland they are almost impossible to ignore. I would just tell them that you are also not your car, which, like your body, is a tool you use to navigate in this dream. To talk of driving your car doesn’t mean you think you are a car.

Student: Sounds good. Another thing they accuse me of is thinking that I am in my body.

Teacher: And why do they say that is not correct?

Student: They say I cannot be in my body because the body does not exist and is just projected by my mind.

Teacher: The problem is that the Course only accords true reality to things that are eternal. Anything that exists in time and space that will someday have an end is regarded as not real or part of the dream. But it does say this:

“What you believe is true for you. In this sense the separation has occurred, and to deny it is merely to use denial inappropriately.” T-2.VII.5

So, does the fact that this world is not real mean that it should be denied?

Student: Not according to that quote.

Teacher: Let me put it this way. When you wake up from a dream would it be an honest thing to do to tell me that you had no dream?

Student: No. That would be a lie and go against being honest, as taught in the Course.

Teacher: But the dream wasn’t real.

Student: It didn’t happen in my waking reality, but it still happened and I had an experience.

Teacher: Is it possible to even talk about the dream without relating your experience in it?

Teacher: And is it possible to talk about this greater dream without talking about your experience in it?

Student: I do not think so.

Teacher: And when you talk about an experience you had in your dream body at night, does this mean that you believe you were actually in a real body?

Student: No. That would be a silly belief.

Teacher: And when you talk about the body here which is an illusion in a dream, does this mean you think you are in a body?

Student: No more than being in a dream body at night.

Teacher: It would appear then that the needed correction is on your accusers who are trying to correct your views which need no correction.

Student: That’s the way I look at it. Thanks.