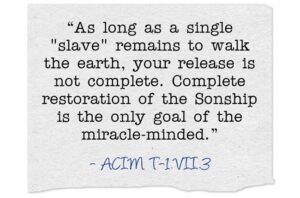 ACIM Conversations, Part 13
Should I Support Improving the World?

Student: There has been a lot of conversation among students lately about the war in Ukraine and other world problems. Some of them seem to want to ignore problems in the world, and sometimes even their personal lives, saying that the world is an illusion and has not even happened so just be at peace and see the situation as unreal as if it is not even there. That sounds a little cold to me. What is your take on this?

Teacher: Let us suppose that you were driving down the road and a child runs out into the street in front of you. Do you put on the brakes to avoid killing the kid or do you just say to yourself, “This is a dream that is not happening? I need do nothing.”

Student: I would think you would have to be insane to not put on the brakes.

Teacher: Yet, perhaps you have encountered those who think we are insane for thinking to do anything in the world to make it better.

Student: Yes, I have encountered some who seem to think this way. I find it disturbing.

Teacher: Yet, you cannot blame those who see in black and white, for the Course does say that “Nothing that you see means anything.” W-pI.7.1 and the world “is not there at all.” T-20.III.5

Student: Yes, and if you take that plus the nothing has happened idea too far then one would have no motivation to do anything to prevent harm.

Teacher: Let us be real here. Do you know any hard-core literalists who would not apply the brakes to avoid hitting a child or to assuage themselves with peace and do nothing if a loved one was being raped in front of their eyes?

Student: I think that those people would be supporting a more common view in situations like that.

Teacher: So, why do you suppose the Course places such emphasis on the nonreality of this world?

Student: I guess the idea is to present the final solution of the separation to us so students will be focused on seeking the spiritual rather than the material world of illusion.

Teacher: Good conclusion, but we must ask this question. What is the final state that we are asked to achieve?

Student: First, we are to change our thinking so we will see the real world, or this world correctly perceived, and finally we awaken and this world disappears.

Teacher: And what did Jesus say to Helen happened to his body when he awakened?

Student: I’m not sure.

Student: “My body disappeared because I had no illusion about it. The last one had gone. It was laid in the tomb, but there was nothing left to bury.” From “Special Messages”, by Jesus through Helen Schuchman.

Teacher: Again, what happened to his body when he awakened?

Teacher: Then if you read the rest of the text you’ll see that he was able to make his body appear and disappear at will. It would be cool to have that kind of power wouldn’t it?

Student: Indeed. I can see why one would be fearless if one did.

Teacher: Do any of your fellow students who keep proclaiming that nothing matters because nothing we see is real have this power to make their bodies disappear and reappear at will?

Teacher: Why not, since they say that our bodies are not even here? Why cannot they not demonstrate that which they claim to be a reality?

Student: I’m not sure. Maybe they do not believe strongly enough.

Teacher: It goes deeper than that. Consider this from the Course: “It is impossible to see two worlds which have no overlap of any kind. Seek for the one; the other disappears. But one remains.” W-pI.130.5

Which world are you seeing at this moment?

Student: I suppose I am seeing the world of the dream.

Teacher: And what would happen if you saw the spiritual world instead?

Student: This one would disappear according to your quote.

Teacher: Kind of like what happened to the body of Jesus when he was fully awake?

Student: That seems to be the teaching.

Teacher: Have any of your friends who say they and the world are not here had their bodies disappear and have left behind all perception of the world?

Student: Definitely not. They still perceive me and our bodies.

Teacher: As we mentioned, the Course was given to us to guide us back to spirit. How long do you think this journey will take?

Student: I’m not sure, but I do know that I am not there yet.

Teacher: Read this passage which may shed some light:

Student: “the separation occurred over millions of years, the Last Judgment will extend over a similarly long period, and perhaps an even longer one.” T-2.VIII.2

Teacher: So how long did it take us to get here at this point?

Teacher: Actually, Helen’s original notes said “many millions.” And how long will the return process take?

Student: As long or longer than it did to get here. I can see now why there has to be reincarnation as Helen believed.

Teacher: Yes, it will take a while, for even though individuals may awaken, the Course tells us the whole Sonship will not be fully in heaven until all awaken and return. Consider this passage: “As long as a single “slave” remains to walk the earth, your release is not complete. Complete restoration of the Sonship is the only goal of the miracle-minded.” T-1.VII.3

The purpose of the Course is to speed up the process of return. Now let me ask you this. Let us say that instead of looking at many millions of years for your return to happen that you could achieve it in a dozen more lifetimes spanning just a couple thousand years. Would you say it is worthwhile to make an effort to improve the conditions of those lifetimes so you and others could have the “happy dream” rather than one that resembles a nightmare?

Student: I’d say it would be worthwhile effort for even one lifetime.

Teacher: Perhaps the greatest example given to us as to how to handle the pain of the world was given by Jesus himself, as related in the New Testament. The scriptures tell us plainly that Jesus worked tirelessly to relieve the pain the people. He caused the lame to walk, the deaf to hear, the blind to see and cured many diseases. When he approached a suffering soul did he ever tell them their problem was not happening and because nothing was happening he did nothing?

Student: No. He worked actively to assist them.

Teacher: Did he ever tell them to not worry about their problem because there were not even there?

Student: Ha ha. Now you’re being funny, but it didn’t seem funny when I hear Course students ay such things.

Teacher: Do you recall the first miracle performed by Jesus?

Student: Yes. That was when he turned the water into wine. That was one of my favorites.

Teacher: They were having a large wedding feast at Cana and they unexpectedly ran out of wine. Everyone was in a great mood and they expected the wine to continue to flow. If it did not the mood would have been spoiled and what was supposed to be a great memory would have been tarnished. Would you say that this miracle improved the quality of the experience for the wedding guests?

Student: I would think so.

Teacher: It is indeed true that when any experience in time ends, whether it be an hour of a million years, it may just seem like an instant when it is over, but when we are in the dream even a few years of pain seems like forever. Because we are obviously seeing this world of illusion and subject to time does it not make sense to do what we can to make life here a pleasant experience for ourselves and others?

Student: Yes. That reminds me of the story by Jesus of the Good Samaritan. A man was attacked by thieves and left for dead. Two pious religious ones ignored him and felt spiritually justified in doing so, but a third, a Samaritan, who was generally considered an enemy by the Jews, stopped to help. This was an example that we are supposed to follow.

Teacher: Yea. Be funny if one of those who didn’t help thought to himself, “This is a dream and that man is not even there.”

Student: Yeah, it would be funny, but not funny. So, if we follow the example of Jesus and do what we can to relieve pain and make the world a better place how then do we handle the injunctions from the Course about seeing the world as if it does not exist?

Teacher: This quotation by the Course from Jesus reveals a lot:

“I must understand uncertainty and pain, although I know they have no meaning. Yet a savior must remain with those he teaches, seeing what they see, but still retaining in his mind the way that led him out, and now will lead you out with him. God’s Son is crucified until you walk along the road with me.” W-pI.rV.in.6

So what does this verse tell us should be the attitude of those who want to be teachers or saviors of others?

Student: It says they “must understand uncertainty and pain” of others who are in the dream.

Teacher: And if he understands will he tell the afflicted to get over it because it is not happening?

Student: That wouldn’t be helpful.

Teacher: But even though a teacher may understand the pain he can see the world as an illusion and escape the pain for himself and eventually lead others to the place of peace. In the process this can happen:

“His Word assures us that He loves the world. God’s Word has promised that peace is possible here, and what He promises can hardly be impossible.” M-11.1

Then this passage is beautifully written:

“Peace now belongs here, because a Thought of God has entered. What else but a Thought of God turns hell to Heaven merely by being what it is? The earth bows down before its gracious Presence, and it leans down in answer, to raise it up again. Now is the question different. It is no longer, ‘Can peace be possible in this world?’ but instead, ‘Is it not impossible that peace be absent here?’” M-11.4

Student: I love that and I love the idea of making the earth a better place whether it be for a few years, a lifetime or many lifetimes.

Teacher: Yes, we all have dreams, but good dreams are so much more pleasant than nightmares. Since we have free will let us go with the good dreams while we are here.