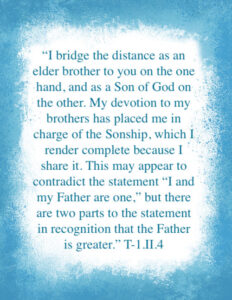 Student: I’ve been coming across some unusual beliefs by students about Jesus who is said to be the author of A Course in Miracles.

Teacher: Why am I not surprised? Okay, I can pretty much guess what they are but hit me with something.

Student: The Voice in ACIM pretty solidly identifies himself as the historical Jesus, but many students reject this. I think the statement of greatest error is that” We are all Jesus.”

Teacher: Why do you think they say that?

Student: I suppose it is because the Course teaches that there is one Son, so they assume that what one has done all have done.

Teacher: Yes, the idea of oneness is confusing to many, especially if they see all life as being one with no parts as we discussed earlier.

Student: Oneness indeed makes much more sense and is in harmony with the Course when you see it as many parts that are united as one.

Teacher: Now if a student accepts the strange idea of oneness so all can claim to be Jesus, one would also have to say he is Hitler as well.

Teacher: There are many statements made by the Voice in the Course that tell us that though we are all one with God, we are individual lives and what Jesus accomplished is different from what students of the Course have accomplished. Read this text:

Student: “I bridge the distance as an elder brother to you on the one hand, and as a Son of God on the other. My devotion to my brothers has placed me in charge of the Sonship, which I render complete because I share it. This may appear to contradict the statement “I and my Father are one,” but there are two parts to the statement in recognition that the Father is greater.” T-1.II.4

Teacher: What does Jesus call himself here?

Teacher: Can you be an elder brother to yourself?

Student: That would be as difficult as creating ourselves which the Course tells us we cannot do.

Teacher: Good point. And who does it say is in charge of the Sonship, you or Jesus.

Teacher: And where do we come in?

Student: It says that Jesus shares the sonship with us.

Teacher: So, does it make sense that instead of being Jesus, we are one, or united with our elder brother by accepting the shared sonship?

Student: Seems obvious to me.

Teacher: There are many passages which tell us that Jesus is a distinct individual from ourselves. Here’s another one.

Student: “There is nothing about me that you cannot attain. I have nothing that does not come from God. The difference between us now is that I have nothing else. This leaves me in a state which is only potential in you.  T-1.II.3

Teacher: So, what is the difference between Course students and Jesus?

Student: Jesus has nothing but what comes from God. I suppose we rely on the ego instead.

Teacher: And what is the promise to us?

Student: We can attain the same things he did.

Teacher: Here’s another passage to read giving encouragement in that direction:

Student: “I have enjoined you to behave as I behaved, but we must respond to the same Mind to do this. This Mind is the Holy Spirit, Whose Will is for God always. He teaches you how to keep me as the model for your thought, and to behave like me as a result.”  T-5.II.12

Teacher: How then is the student supposed to view Jesus – as himself or something else?

Student: It says we are to see him as a model from which to pattern our behavior.

Teacher: I suppose it may be tempting to be able to claim the works of Jesus without making the effort to attain to his stature, but obviously there are steps that each of us must take to attain as he did.

Student: You would think that would be obvious. There’s another point that some students bring up. Some say that the Jesus in the Course is not the historical Jesus from the New Testament.

Teacher: And why do they say that?

Student: Some come from an atheist or agnostic background and never accepted the story of his life. Others believe the identification is just symbolic.

Teacher: If one doubts the perfection of the Course script then doubting whether or not the Voice is Jesus makes sense. But if one accepts that the Course is a divine revelation without major errors then one would have to accept that the Voice is that of the historical Jesus.

Student: Can that be proven from the Course?

Teacher: The proof is pretty solid for the Voice specifically identified with the Jesus of history numerous times. Here he verifies the garden experience, his crucifixion and relationship with the apostles:

“The Apostles often misunderstood it (the crucifixion), and for the same reason that anyone misunderstands it. Their own imperfect love made them vulnerable to projection, and out of their own fear they spoke of the “wrath of God” as His retaliatory weapon.” T-6.I.14

“As you read the teachings of the Apostles, remember that I told them myself that there was much they would understand later, because they were not wholly ready to follow me at the time.  I do not want you to allow any fear to enter into the thought system toward which I am guiding you.” T-6.I.16

And here he specifically identified with “Christ Jesus.”

“The Bible says, ‘May the mind be in you that was also in Christ Jesus,’ and uses this as a blessing. It is the blessing of miracle-mindedness. It asks that you may think as I thought, joining with me in Christ thinking.” T-5.I.3

Teacher: Yes, here it is:

“Judas was my brother and a Son of God, as much a part of the Sonship as myself. Was it likely that I would condemn him when I was ready to demonstrate that condemnation is impossible?” T-6.I.14-15

Student: That sounds like the entity who is Jesus recalling what happened.

Teacher: Now read this as he is even more specific:

Student: “My body disappeared because I had no illusion about it. The last one had gone. It was laid in the tomb, but there was nothing left to bury. It did not disintegrate because the unreal cannot die. It merely became what it always was. And that is what “rolling the stone away” means. The body disappears, and no longer hides what lies beyond. It merely ceases to interfere with vision. To roll the stone away is to see beyond the tomb, beyond death, and to understand the body’s nothingness. What is understood as nothing must disappear.

“I did assume a human form with human attributes afterwards, to speak to those who were to prove the body’s worthlessness to the world. This has been much misunderstood. I came to tell them that death is illusion, and the mind that made the body can make another since form itself is an illusion. They did not understand. But now I talk to you and give you the same message. The death of an illusion means nothing. It disappears when you awaken and decide to dream no more. And you still do have the power to make this decision as I did.” From “Special Messages”, by Jesus…Additional material through Helen Schuchman. Also quoted in Absence From Felicity by Ken Wapnick

Wow! That is pretty specific

Teacher: But perhaps the coup de grâce is the many quotes the Voice of ACIM uses that are attributed to the historical Jesus of the New Testament. The Voice often indicates that he is quoting himself. I’ve compiled a list. Go ahead and read them off.

Student: “No man cometh unto the Father but by me”

“Heaven and earth shall pass away”

“Lead us not into temptation”

“Except ye become as little children”

“the meek shall inherit the earth.”

“Father forgive them for they know not what they do”

“Do this in remembrance of me”

“Blessed are the pure in heart for they shall see God”

“Before Abraham was I am.”

“Judge not that ye be not judged,”

“The Kingdom of Heaven is within you”

“Seek and ye shall find”

“turning the other cheek.”

“thine is the Kingdom,”

“I am come as a light into the world,”

That is what I meant when I said, “Blessed are ye who have not seen and still believe,”

“Seek and you will find,”

“Let me not wander into temptation.”

“This is my beloved Son

“Of myself I can do nothing” is to gain all power

Wow. That’s quite a list. Obviously, the Voice identifies with the Jesus of the New Testament.

Teacher: Like I said. If one doubts the perfection of the Course then one may be justified in considering that the Voice may be merely symbolic, but if one accepts it as a real Divine revelation then one should conclude the Voice is the historical Jesus.