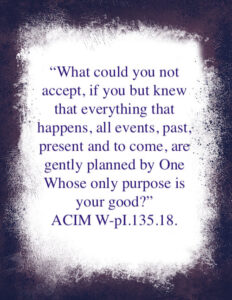 One can see why students are divided on whether or not life is all predestined like a movie because of what appears to be contradictory statements in the Course. Some passages seem to indicate the dream state is madness and chaos, and others sound like God planned it all, as in this passage:

“What could you not accept, if you but knew that everything that happens, all events, past, present and to come, are gently planned by One Whose only purpose is your good? Perhaps you have misunderstood His plan, for He would never offer pain to you. But your defenses did not let you see His loving blessing shine in every step you ever took.” W-pI.135.18.

Then, other times the Course tells us that God has nothing to do with this world of things in time:

“Is it not strange that you believe to think you made the world you see is arrogance? God made it not. Of this you can be sure. What can He know of the ephemeral, the sinful and the guilty, the afraid, the suffering and lonely, and the mind that lives within a body that must die? You but accuse Him of insanity, to think He made a world where such things seem to have reality.” W-pI.152.6

“How could the Will of God be in the past, or yet to happen? What He wills is now, without a past and wholly futureless.” W-pI.131.6

The question is, why does the Course suggest that our dreamlife, composed of the past projected to the future, is planned by God when it also tells us the Father has no interest in it – that He created the Holy Spirit to help us out and is just waiting for our return? He is like the Father in the Prodigal Son, where He doesn’t involve Himself with the wayward son’s adventures, but just waits for him to come to his senses and return home.

Let us therefore seek an explanation as to why it sounds like God is involved in our life’s planning here. Let us look at this text again:

“What could you not accept, if you but knew that everything that happens, all events, past, present and to come, are gently planned by One Whose only purpose is your good?” W-pI.135.18.

Who is the planner, or the “One Whose only purpose is your good?”

The casual reader just assumes it is God, or the Father, but that seems to conflict with other passages. For clarification, we need to understand what the Course considers to be the one life which is God.

The One God consists of the Father, the Son, the Holy Spirit and Angels using their correct powers of creation in the waking state. Of the Four, the Sonship miscreated and produced a dream state called this “world.”

Now, even though we seem to have separated, there still exists a higher part of ourself in heaven, and this part of ourself is one with God. It would be technically correct to say that the Sonship has a high interest in successfully planning our return, whereas the Father focuses only on the eternal.

Thus, when the Course tells us that God is doing something in the world the act could be initiated by the Sonship with the assistance of the Holy Spirit or angels, but not directly by the Father, who pays no attention to this world, according to ACIM.

Thus, the one who is interested in planning our lives is really us. After all, is there anyone more interested in your life than you?

We are not talking about the you that is projected in the dream, but the dreamer who is one with God. This higher part of yourself is the real planner.

Evidence for this is found in the investigative research by Dr. Michael Newton, a psychologist who started as a non-believer, but discovered through hypnosis that his patients could not only recall past lives but their life between lives.

The life between lives particularly interested him, for very few had previously investigated this through hypnosis.

He regressed around three thousand individuals to their life between lives and the consistency of their accounts made a believer out of him. It is impressive when one works with unrelated individuals who relayed many details that agree.

Dr. Newton wound up writing three bestselling books that give many fascinating details of the life-between-life experience and the world there. I find it interesting that his writings are not only in harmony with A Course in Miracles, but add a lot of knowledge that clarifies some of the teachings that are not clear in the Course.

It is interesting that the descriptions given of the after-death world matches very closely to that of the real world given in the Course. ACIM tells us that the real world is a bridge between our true home and this world where form still exists yet we see with extra clarity.

Newton discovered that the afterlife world is indeed more real than this one, where the inhabitants can see the truth much more clearly than here. There we live in a much higher state of consciousness than here, and when we are born in a body, we project a portion of our consciousness into this world. During incarnation, entities in the spirit world usually have about 25-35% of their consciousness projected here on earth and the rest remains there until reunited after death.

Newton discovered many interesting details of our lives there, but I want to focus on one that should be of particular interest to Course students, and that is the planning of our earthly lives.

His clients revealed that shortly before birth it is revealed to us the situation of our future life. Usually, there is one definite set of parents, but sometimes there is a choice between two or more. We always keep our free will and can accept or reject the recommendation, but all his clients accepted theirs because they had great trust in the intelligence involved. It is also interesting that we were much more enthusiastic about taking on a difficult life than an easy one because our progression would be enhanced.

After we accept our assignment to our future life, we can enter a place something like the Holodeck on Star Trek. There we can see a projection of how our future life is expected to play out. It is pretty accurate, but not infallible due to free will. Our stubborn ego self always has the ability to get us off plan, but if it does, there seems to be a natural flow of events to guide us back on.

The Course speaks of triggering events similar to those covered by Newton “of what seem to be very casual encounters; a “chance” meeting of two apparent strangers in an elevator, a child who is not looking where he is going running into an adult “by chance,” two students “happening” to walk home together. These are not chance encounters. Each of them has the potential for becoming a teaching-learning situation. Perhaps the seeming strangers in the elevator will smile to one another, perhaps the adult will not scold the child for bumping into him; perhaps the students will become friends.” M-3.2

The Course indicates that these supposed chance encounters are a part of a plan leading to our eventual awakening.

Newton discovered that this was correct, but our lives are not planned down to insignificant details; there are certain events in our lives that are important to occur, so we review the projection to establish them deep in our awareness. Then when we encounter the event in our lives, we will often have a feeling of déjà vu. This is a sign that we are moving ahead on schedule.

There are several encounters that are of great importance, such as finding the person you will marry or some other important person in your life. We place extra attention on this projection to make sure we get it right. When we review meeting our future spouse, we will take special note of something about him or her to establish what is called a “trigger.”

A trigger is something unique about one of your initial encounters. It could be the way the person smiles, the look in his or her eyes, a certain statement that is made, the smell of a perfume, a chance meeting at a bus stop or many other possibilities. In your future life preview you study this carefully and embed it in your consciousness to make sure you get the message when you meet on earth, for some events are much more important to materialize than others.

When I read about this in Newton’s writings, I knew exactly what my trigger was with my wife and could see how this made sense.

I have done some of the same work as Newton, but mostly focused on past life regression. The ones I have done with the life between lives reveal information that is in harmony with his.

Newton’s research also reveals why so many today accept the multiverse theory which states that each decision in life creates a new universe where both decisions are carried out. This always seemed wrong to me, but Newton discovered why many think we are living in many different alternate realities.

He discovered that we, as souls just live in one universe, but in this spiritual Holodeck we can experience what life would be like if we had made different choices.

For instance, if after your life was over and you took job A while living, but strongly considered taking job B, perhaps you wonder what life would have been like if you made a different choice. You can run a simulation and have it play out as if you are actually there and see how things would have turned out. You can also do this with your approaching life. This will give you an affirmation that the plan for your life is for the best.

So, according to Newton, we do have a script for important events that we, with highly evolved entities, helped to write. It is not set in stone like the frames of a movie, for we can always go off script, but overall, most of us play it out pretty close to the plan.

It only makes sense that we would use spiritually-advanced technical knowledge to plan our lives from the vantage point of higher consciousness. After all, we attempt to do that here on earth with our limited awareness. In our younger years most of us make some plans and some work out and others do not. Why wouldn’t we also be interested in planning our life just before birth also?

Now, the point to consider is this. Is your life going according to plan? If it is, you will have a sense of peace about it. If it is not, you will feel very restless and out of sync. In this case it is time to listen to the inner voice for guidance so you can get back on track.