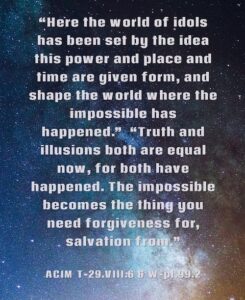 Student: Last time we talked about the fascinating teaching calling the separation “an instant that is relived again and again and still again.” M-2.3 & 4 We concluded that it is not the same Sons who are doing this but it fulfilled the desire of the newly created Sons wanting to have the experience. Does this mean that the separation will never be completely healed?

Teacher: Yes and no.

Student: Why am I not surprised that the answer is not simple?

Teacher: It is simple once it is understood. Let us first review an important principle taught in the Course. Do you recall that it teaches that the purpose of the Son is to create?

Teacher: And that which the Son creates are more Sons which expands the real universe itself?

Student: Yes, I found that an interesting teaching that the Course plainly teaches but went over my head.

Teacher: And here is the crucial question. How long do the creations of the Son last?

Student: I believe it is eternity.

Teacher: Correct. Read again the passage we ended with in our last discussion

Teacher: On the other hand, all things in this world of form, time and space are not eternal but will have an end. Read this:

Student: “The stars will disappear, and night and day will be no more. All things that come and go, the tides, the seasons and the lives of men; all things that change with time and bloom and fade will not return. Where time has set an end is not where the eternal is.” T-29.VI.2

Teacher: So, even the sun and the stars which last billions of years will someday have an end. All things will eventually end in this world, even the universe itself. If this is the case, how could it be created by the Son when all that the Son creates is eternal?

Student: Good question. I guess we are to believe the Son went temporarily insane, split his mind and in his wrong mind created this world of illusion.

Teacher: And what is the difference between the world of illusion and the eternal world?

Student: Everything in this world has a beginning and an end while everything in heaven is eternal

Teacher: And because everything in time and space will have an end and be as if it never was, the Course sometimes refers to this world as something that does not exist, but even a temporary dream has an existence, just not an existence in the waking world. Read these quotes:

Student: “Here the world of idols has been set by the idea this power and place and time are given form, and shape the world where the impossible has happened.” T-29.VIII.6 “Truth and illusions both are equal now, for both have happened. The impossible becomes the thing you need forgiveness for, salvation from.” W-pI.99.2

Teacher: So what happened?

Teacher: And what is that?

Student: I suppose it is the creation or making of this temporary world of illusion

Teacher: And why is it called impossible?

Student: Because what the Son creates is supposed to be eternal and all things in this world are not eternal and will have an end.

Teacher: Since it is impossible for the Son, who is like the Father, to create anything that is not eternal then how could that which is temporary also be eternal?

Student: You got me there. That doesn’t sound possible.

Teacher: Yet it is possible. Do you remember what the Course called the separation in the beginning?

Student: It called it “a mad idea.”

Teacher: And can an idea be destroyed?

Student: I suppose it can be put aside, but I would have to say that you cannot destroy it

Teacher: And the Course affirms this. It says, “my words make perfect sense because they come from God. They are as sensible now as they ever were, because they speak of ideas that are eternal.” T-9.IV.4

We are told that this mad idea first surfaced in a past so ancient that it is beyond the reach of any memory, but here we are still talking about it. Is this not proof that even a mad idea is eternal?

Student: It would seem so.

Student: You tell me.

Teacher: No. You tell me after you read again the quote from the beginning of our conversation.

Student: (He reads that the mad idea is) “an instant that is relived again and again and still again.” M-2.3 & 4

Teacher: So how can that which is not eternal be eternal?

Teacher: And who is it that would desire to enter into the dreamworld again?

Teacher: The time will come when all the stars and the whole universe will be no more. Does this mean that the idea behind the universe of time and space is no more?

Student: The idea would still be there.

Teacher: And would there be anything stopping a group of all powerful Sons from manifesting it again, if they desired?

Student: I suppose not.

Teacher: And on a miniature scale let me ask you this. Do you just have one dream during one night or do you have many dreams over many nights?

Teacher: And correspondingly would the Sons of God just have one dream and wake up with no Sons ever having a dream again?

Student: What you’re saying does make sense. Various Sons create a dream like this world “again and again and still again,” for an idea is eternal and cannot be destroyed.

Teacher: So that which is temporary can be eternal if it repeats forever- as the Course  says “The circle of creation has no end.” T-28.II.1

Student: I can see now that all things the Son creates is eternal just as the Course says. It is like an eternal round or circle of creation. This is fascinating to contemplate.