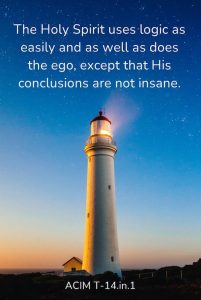 ACIM Conversations, Part 2
The Ego and the Spirit

Student: In our last conversation we concluded we either follow the ego or the Holy Spirit, and if two disagree on teachings then one or both of them are in the ego. Let us suppose that one individual follows the ego and the other the Holy Spirit. How would you tell which is which?

Teacher: Tell me. What is the difference between the feelings generated by the two?

Student: The Course tells us that fear, hate, guilt, grievances, attack and lack of peace come from the ego. By contrast, feelings associated with the Holy Spirit are peace, love, joy, unity and probably more. I guess you could say negative feelings are associated with the ego and the positive ones with the Spirit.

Teacher: So, if you observe these two people for a while do you think it would become obvious as to which one has the peace of the Spirit and which has the negativity of the ego?

Student: One would think that would be the case.

Teacher: Here is another clue from the Course: “The Holy Spirit uses logic as easily and as well as does the ego, except that His conclusions are not insane.” T-14.in.1

This makes the interesting statement that both use logic. Therefore, a bystander who is listening may see the logic displayed on both sides and may not be able to conclude who is correct. But then the quote tells us a distinctive difference. What is that?

Student: The conclusions of the ego are insane and those of the Holy Spirit are not.

Teacher: Exactly. If one can identify with the pure reasoning of the Spirit, he will see the conclusions that make sense and know they are on the side of the Spirit. We could go into many differences between the Ego and the Spirit, but this will suffice for this discussion. So, what do we look for in those who are following the Holy Spirit?

Student: Positive feelings of peace and oneness as well as coming to sensible conclusions when using logic.

Teacher: Have you noticed that the one who is furthest from peace seems to come to the most illogical conclusions?

Student: Yes. They both may make logical presentations, but some pretty wild conclusions are reached, and the worst part is the separation between the conclusions is often great.

Teacher: A good example of this is the current rise in the belief that the earth is flat. There is a lot of discussion currently going on as to whether or not this is true. Now, the average person may not think the flat earth person has any logic at all in his thinking, but he would be wrong. If you watch their videos and discussions, you will see many logical and true points presented only to reach the insane conclusion that the earth is flat. Can you see that this is what the ego does on any subject that furthers its cause?

Student: Yes, I’ve seen it with Course students. Sometimes pretty wild and illogical conclusions are reached that are not in harmony with the Course.

Teacher: In a discussion of the Course where there is disagreement, what do you suppose is the most obvious giveaway of who is in the ego?

Teacher: That will occur, but I’m talking about what happens during the actual discussion.

Student: A lack of peace.

Teacher: Have you ever heard a serious ACIM student admit that he lacks peace?

Student: Rarely, if ever.

Teacher: Yes. Because of the Course’s stress on peace, no serious student wants to admit that he lacks it, as that would be like admitting that the ego has control, but he does show his lack of peace in an obvious way. Any idea what it is?

Student: Perhaps it is anger.

Teacher: Again, this is something that the ego does not want to reveal, as it tells everyone that he is not one with the Holy Spirit. Think again. What do you see revealed in discussions where the ego is in control?

Student: I’ve noticed that the one with the weakest case seems to start attacking and judging the other person.

Student: Can you give me an example?

Student: That’s almost funny. The guy in the ego portrays the other as being in the ego.

Teacher: Yes. This often happens. The ego when cornered will reflect its own imperfections on to the other person. Can you recall other accusations you have heard?

Student: Sometimes they fly rather freely when an argument gets started. I’ve seen the main guy who is in the attack mode accuse the other guy of being the attacker.

Teacher: This is the mirroring of the ego I was talking about. Anything else?

Student: Accusations of hypocrisy and lying are common and occasionally there will be accusations of intolerance, hate, ignorance and so on.

Teacher: Yes, accusations of hypocrisy and lying are high on the list, but when the ego’s superiority is challenged, it will attack to the maximum amount possible while trying not to expose itself.

Student: Anything else I should look for?

Teacher: The ego reveals itself in many subtle ways, but I’ll point out one more that it often uses and that is playing the victim. It will complain of hurt feelings or being justly offended because of something said. The one in the Spirit is virtually impervious to being offended or hurt through a mere exchange of words. Then the crazy part is the one who is offended will often accuse the other guy of being the one who is offended.

Student: It sounds like the ego is a master of confusion and manipulation.

Teacher: Indeed, it is.

Student: So, what is the difference when two who are in the ego have a disagreement?

Teacher: When two egos have a disagreement there is great confusion for neither understands the other, and both wind up attacking in some manner and being offended. It is interesting to note, though, that one in the ego is often more offended at one in the Spirit than another in the ego. Darkness hates the light more than additional darkness.

Student: How about two who are listening to the Holy Spirit? Do they ever disagree?

Teacher: Normally, they will see eye to eye and understand each other. However, because of the imperfections of communicating with language and different backgrounds, there may seem to be surface disagreements at times, but when they get together and discuss them, they will do so in a friendly spirit without attacking each other, and in the end, see the other’s point of view and understand it.

Student: Would you say that we are examples of two in the Spirit having a conversation?

Teacher: Yes. We both do our best to receive guidance from the Spirit but we have different degrees of investment in absorbing A Course in Miracles. But notice that we are resolving our differences of understanding and coming to agreement.

Student: Yes, and it feels good to the Spirit in my inner core.

Teacher: And if we both stay in contact with that Spirit, our conversations here will bear much fruit.