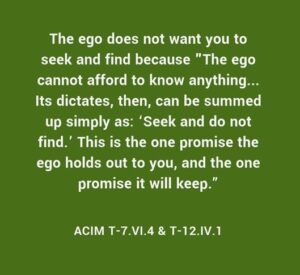 ACIM Conversations, Part 19
The Ego and the True Self

Student: In our last conversation we established that the Course teaches that the self exists independent of the ego, but it seems that this self is merely interpreted differently here on earth, under the domain of the ego, than it is in heaven.

Teacher: Indeed. And what do you perceive that difference to be?

Teacher: You are in harmony with the Course here which states this about the self of the ego: “The ego’s goal is quite explicitly ego autonomy. From the beginning, then, its purpose is to be separate, sufficient unto itself and independent of any power except its own. This is why it is the symbol of separation.”  T-11.V.4

Now read what the Course says about differences between the two selves:

Student: “The one created by his Father is wholly Self-encompassing and Self-extending. The one he made is wholly self-destructive and self-limiting.” T-20.VI.1

Student: “To be egocentric is to be dis-spirited, but to be Self-centered in the right sense is to be inspired or in spirit.” T-4.in.1

Sounds like our true self just realizes he is not alone and understands who he is.

Student: I like that as all that is in me recoils from the idea that my self will be no more after I wake up.

Teacher: The beauty of waking up is that you do not discover that your self does not exist, but that your true self is much greater than you realized because you, as a unique part of the Sonship, identify with the whole:

“You are one Self, united with your Creator, at one with every aspect of creation, and limitless in power and in peace.” W-pI.95.10

Instead of seeing ourselves this way we are told that we had a misguided “plan to lose your Self.” W-pI.166.10

Student: It sounds like the real problem is not that of having a self, but that we lost the knowledge of what the real self is.

Teacher: Yes, we are told that the ego is “A concept of the self is made by you. It bears no likeness to yourself at all.” T-31.V.2 Instead, “Christ is God’s Son as He created Him. He is the Self we share, uniting us with one another, and with God as well.” W-pII.6.1

Student: So when I wake up I will not find that my self does not exist, but that it is much greater than I realized. That sounds much better than waking up to nonexistence and non-duality, which doesn’t even make sense.

Teacher: To understand think of how you feel when you wake up from a dream. Do you feel like your self in the dream has vanished?

Student: No. I still feel like I am the same self that was in the dream.

Teacher: And what is the difference between your dream self and waking self?

Student: The waking self is more aware. There seems to be a conscious part of my mind missing in the dream.

Teacher: And here in the greater dream what seems to be missing?

Student: I would say it would be the spiritual or real part of the mind.

Teacher: And when you wake up do you think you will feel you lost something?

Student: If it is like waking up from a night dream, I would have to think it would feel like a gain, not a loss.

Teacher: Does that understanding help dispel the fear of loss when you return to your true home?

Student: It certainly sounds better than myself going into oblivion, as believed by the atheist.

Teacher: Indeed, for many, going into non existence is a more frightening thought than going to an eternal hell. Just consider that if you woke up and found that you were God existing in pure non duality all alone – not having anything or anyone to love and you had to be alone for all eternity. Would not that be the greatest hell one can imagine?

Student: I cringe at that thought. So how do I use the correct understanding of the ego to deal with students who accuse me of being in the ego when I try to think out of the box?

Teacher: You could cite the example of Jesus. Do you think they would agree that he was not controlled by the ego?

Teacher: And would most agree that both his teachings and actions were out of the box in his time?

Student: Don’t think there would be any argument there.

Teacher: You’ll recall the Course compared the ego to the Devil. Do you realize the authorities of the  day made that same comparison toward Jesus?

Student: I know they were certainly threatened by him.

Teacher: When they saw him performing miracles they accused him of working “through Beelzebub the chief of the devils.” Luke 11:15

Student: So that was like saying he was working though the chief of egos. Now I don’t feel so bad about the accusations toward me.

Teacher: So when they saw the devil in Jesus what did they really see?

Student: I suppose it was the devil in themselves projected toward Jesus. But what can I say to those accusing students to make them realize that I am not speaking from the ego, but I see myself speaking in agreement with the Holy Spirit?

Teacher: Is the problem that they seem to think it is your ego making you seek for answers outside the box.

Student: That seems to be the way it is.

Teacher: Here are some quotes that should set them straight, but I wouldn’t bet your mom’s operation money on it.

“Its (the ego) dictates, then, can be summed up simply as: ‘Seek and do not find.’ This is the one promise the ego holds out to you, and the one promise it will keep.” T-12.IV.1

The ego does not want you to seek and find because “The ego cannot afford to know anything.” T-7.VI.4

“True perception, a state of clarity which the ego, fearful of being judged truly, MUST avoid.” UR T 4 F 13

Student: I like that statement about true clarity for it seems that when I seek to clarify some teachings that I am told that it is my ego speaking and I should cease asking questions. That attitude reminds me of my religious teachers when I was young telling me that I lacked faith for questioning things.

Teacher: Yes. That Seek and do not find thinking of the ego manifests itself in every belief system, even in one as pure as ACIM.

Perhaps it would be helpful to list some differences between the approaches of the Holy Spirit and the ego. First, what does the Course tell us about the ego?

Student: Like you just said; it says to seek and not find so everything questionable remains a mystery.

Teacher: Now read this to see the approach of the Holy Spirit:

Student: “To seek and not to find is hardly joyous. Is this the promise you would keep? The Holy Spirit offers you another promise, and one that will lead to joy. For His promise is always, ‘Seek and you will find,’ and under His guidance you cannot be defeated.” T-12.IV.4

Sounds like the ego wants to avoid the truth but the Holy Spirit wants to help us find it. I think some of my fellow students must have missed this.

Teacher: And what would you say another difference would be?

Student: Some students do not agree with me, but I would say that the Holy Spirit supports logic and reason and the ego does not, though it tries to make you think it does.

Teacher: The Course agrees with you. Read this about the ego:

Student: “Consider what the ego wants defenses for. Always to justify what goes against the truth, flies in the face of reason and makes no sense.” T-22.V.2

Teacher: Now read this concerning the Holy Spirit and reason:

Student: “What reason points to you can see, because the witnesses on its behalf are clear. Only the totally insane can disregard them, and you have gone past this. Reason is a means that serves the Holy Spirit’s purpose in its own right.” T-21.V.7

Teacher: Would you say that seeking truth and using reason is endorsed by the Course?

Student: It certainly seems so.

So, when a fellow student accuses you of being in the ego just go through the contrasts in your mind and if you see that you are on the side of the Holy Spirit ask them to justify their accusation.

Student: The other day I was asking some students how they would define what love is and one acted insulted and said that question was from the ego. How should I respond?

Teacher: First realize that the ego does ask questions, but it doesn’t want true answers as you obviously did. Rather than offering him a long explanation, just ask him to explain why he thinks this way. When someone attacks unjustly, they can never explain themselves without revealing flaws in their reasoning. Accusers are generally projecting their own flaws and are afraid to face them. Just make your case and let it go, for accusers rarely change their minds.

Student: I appreciate your comments.