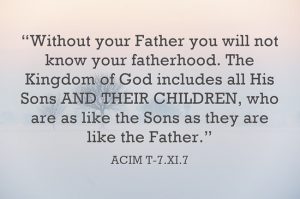 Student: We have dispelled the idea that we are just watching a rerun of our lives (See Part 9) and discussed the Course’s meaning when it refers to the one Son or Sonship. But in connection with this many believe that the Course teaches that every move we make is predestined like every frame in a movie projector is already filmed and nothing can change the next scene to be projected.

Teacher: What do you think of that idea?

Student: It just doesn’t sound right to me, especially considering that the Course teaches we will not have memories of this illusion when we return, and it will be to us as if this dream never happened just like our dreams at night. Why would we recall to memory that which is no longer remembered?

Teacher: Good question. Why do you suppose that many think we are reliving memories when we are told we will have no memories?

Student: From my studies the Course appears to teach it both ways. It says we will have no memories yet it also says we are here reliving memories.

Teacher: Let us take a look at a passage that talks about reliving the past. Here is one:

“Time really, then, goes backward to an instant so ancient that it is beyond all memory, and past even the possibility of remembering. Yet because it is an instant that is relived again and again and still again, it seems to be now… The world of time is the world of illusion. What happened long ago seems to be happening now. Choices made long since appear to be open; yet to be made. What has been learned and understood and long ago passed by is looked upon as a new thought, a fresh idea, a different approach.” M-2.3 & 4

This does sound like we are reliving a very ancient instant “again and again and still again.”

Teacher: Can you conceive of how this quote we gave about reliving the past could be in harmony with your instinct about not choosing to relive a painful past?

Student: Sorry. I can’t. It sounds insane that any Son would voluntarily choose to relive a nightmare “again and again and still again.”

Teacher: Yes, it would be insane. Who wants to relieve even a good day over and over?

Student: Good point. I’m all ears regarding your explanation.

Teacher: To understand this conundrum we have to recall the meaning of the Son or Sonship that we discussed earlier. You will recall that we agreed that the Son represents one great life, but with many parts called the “Sons of God.”

Teacher: And did all the Sons enter the illusion?

Student: No. Part stayed in heaven.

Teacher: Have you noticed that when the Course talks about something that part of the Sonship does it speaks as if the whole Sonship is doing it?

Student: Yes. Sometimes it seems to be speaking to just me, or maybe to Helen, but I could see that it applied to the whole Sonship.

Teacher: Would you say that it makes sense that the action or thought of the part affects the whole?

Student: Seems to. After all, the Course tells us that the separation “shattered heaven.”

Teacher: Did you realize that there are four groups of Sons within the Sonship? We previously discussed two which were the Sons who never left heaven and the Sons who separated. Do you remember a third?

Student: Apparently there are some who separated and then awakened and are fully in heaven. You say there is a fourth group? Who would that be?

Teacher: New Sons, or Sons created after the initial separation.

Student: Wow! That is an interesting statement but I do not recall reading about new Sons.

Teacher: You have to take what the Course says and add 2+2 to equal 4. Tell me what does the Course say the purpose of the Sonship is?

Student: I guess to be one and live in joy and peace.

Teacher: It’s more than that. Here read these two quotes:

Teacher: So, what is the purpose of the Sonship?

Teacher: Yes and even the Bible in John, chapter one, we are told that Christ, another name for the Sonship, created all things. Now tell me this. What is it that the Son creates as the Father did?

Student: “There is no end to God and His Son, for we are the universe… See His creations as His Son” T-11.I.5

Teacher: Here we see that the Son is synonymous with the universe itself. It says, “The universe consists of nothing but the Son of God, who calls upon his Father.” W-pI.183.10 Again I ask what is it that the Son creates as the Father did?

Student: “A co-creator with the Father must have a Son. Yet must this Son have been created like Himself.” T-24.III.6 “You are part of God, as your sons are part of His Sons.” T-7.I.3

Teacher: So when the Son creates what does he produce?

Teacher: In fact, the Course tells us that we will attain to the position of fatherhood. read this:

Student: “Without your Father you will not know your fatherhood. The Kingdom of God includes all His Sons AND THEIR CHILDREN, who are as like the Sons as they are like the Father.” T-7.XI.7

Wow. This is quite a teaching. How did I miss this?

Teacher: We tend to remember what fits in with our current belief system. Now is the time to add 2+2 and see what we come up with. We are told that the initial separation occurred in a past so ancient that it is beyond memory but Sons still want to access this dreamworld and relive it. We concluded that Sons who have awakened would have no desire to do this since they view it as a nightmare compared to heaven. But there is a fourth group of Sons in heaven who may be curious as to what it would be like to enter the dream. And who might they be?

Student: The Sons who were created after the initial separation. This is fascinating. I think I see where you are going.

Teacher: And kids are always curious aren’t they? Since all things are accessible to all Sons the newly created sons would become aware of the separation that the parents experienced. Even if the parents told them that it was a nightmare their curiosity would still remain. What do you think? Does adding 2+2 tell you that some of them decided to relive the dream, but on their own terms?

Student: That does make a lot of sense when you think about it.

Teacher: Since creation is eternal then the new Sons would have additional Sons and they also would be curious and some of these would want to experience the dream

Student: A light just went off in my head! I can see what the passage means that says the Sonship is reliving the separation “again and again and still again.” It is not individual Sons who have awakened who are doing this, but newly created Sons and later their Sons and then their Sons and so on.

Teacher: So on for how long?

Teacher: After all, it is written that “What God and His Sons create is eternal” T-8.VI.3 and “The circle of creation has no end.” T-28.II.1

Student: I’ll tell you this. You have certainly gave me a lot to think about today

Teacher: There more to come. Prepare yourself.