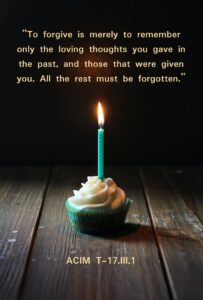 ACIM Conversations, Part 17
What is Forgiveness?

Student: I’ve been involved with some ACIM students over the subject of forgiveness and find their thoughts on it are all over the place. In your studies of the Course have you come across a definition that pins it down?

Teacher: First, let me ask you this. What is the definition of forgiveness as defined by the world?

Student: I’ll check with an online dictionary to see what it says. The Oxford dictionary seems to offer a concise definition as is commonly understood. It says it is when we “stop feeling angry or resentful toward someone for an offense, flaw, or mistake.”

Teacher: That seems to sum up the way most people perceive it. How are the students you are involved with seeing it different from this?

Teacher: The problem is that the Course has expanded the meaning of forgiveness much beyond the standard definition. Since this is a core teaching in the Course it would have been helpful if it had given us a concise, easy to understand definition at the beginning of the text, but, as it is, one has to plow through the entire course to get a true impression of what it is really trying to say about the subject.

Student: You’ve studied it more than I have. What have you come up with?

Teacher: The Course just seems to assume that we know what forgiveness is, as if the standard definition would apply, but then it takes us into new territory without any redefining.

Student: You mean that you can’t find a definition of the word throughout the whole Course?

Teacher: There are all kinds of effects described that forgiveness is to produce but the closest specific definition is this passage

“To forgive is merely to remember only the loving thoughts you gave in the past, and those that were given you. All the rest must be forgotten.” T-17.III.1

Student: That is pretty much in harmony with the dictionary definition. If you have only loving thoughts, you will not be taking offense over what someone does. On the other hand, it doesn’t seem to apply to forgiving a rock for being in the way of my toe. I have no feelings positive or negative toward a rock in my path.

Teacher: But stubbing your toe may make you angry and that is not a loving thought.

Student: Yes, and this is where the Course seems to go beyond the regular meaning of the word.

Teacher: Yes, in normal understanding forgiveness only applies to offenses created by other human beings, but the Course has it applying to painful circumstances where individual humans are not involved. It even tells us we are to forgive the world. What do you suppose that means?

Student: I’m not sure. The world is not some entity that insults you. The regular definition does not apply there.

Teacher: But if we apply that definition I quoted from the Course one could say that a lot of things seem to happen in the world that produce unloving thoughts.

Student: So, if you are facing a disaster like a hurricane, one would find it pretty difficult to focus on only loving thoughts.

Teacher: It would, but perhaps that is what you would do at that time if you are successful in forgiving the world for the hurricane is a product of the world we made.

Student: In fact, most of my thoughts that are not loving are not caused by other people but by circumstances that just happen. I got fat tire the other day and was late to an important meeting. That made me vey angry. Who was I supposed to forgive – the tire?

Teacher: That may be part of what it means by forgiving the world, for that was an event manifested in it.

Student: But a flat tire out of the blue is much different than someone who attacks you with intent to do harm. I can’t find anything to forgive with the flat tire, but I admit that some people’s actions do affect me and I can see where forgiveness in the traditional sense may be in order there.

Teacher: Forgiveness as taught in ACIM is definitely not the traditional one, though it includes that.

Student: So, from your study of the Course how would you define the meaning of forgiveness as intended by its Author?

Teacher: The ACIM definition would include the dictionary definition you gave earlier and it appears that is what it is often talking about.

Student: How about summing up the ACIM non-dictionary definition?

Teacher: The Course tells us that this world of time and space is an illusion and does not even exist in the true reality. It also says that we cannot see two worlds but see either this world of illusion or the real one. So, putting all this together the Course seems to be telling us that true forgiveness is the application of true vision. To forgive the world and all that is in it one must see it as not existing and as having no real effect. When one does this, he will begin waking up

Student: I must still be asleep then because I would certainly attempt to get out of the way if a hurricane was headed my direction. I do not think I could just tell myself that it was an illusion that would have no effect.

Teacher: I have to admit that I probably would also, but do you recall how Jesus reacted when the ship he was on was threatened by a storm and his disciples thought they were going to die?

Student: He commanded the storm to be still and it went away.

Teacher: In ACIM language he forgave the storm. In other words, he saw it as something that did not exist in his waking reality so it did not exist. Do you recall another instance where his life seemed to be threatened?

Student: I’m not sure.

Teacher: Another time a mob from his home town tried to throw him off a cliff and he merely disappeared out of their midst. (See Luke 4:29-30)

Student: That would be so cool to have power. like that

Teacher: Indeed. The Course tells us that we will be invulnerable with a simple change of mind. We understand the theory behind the forgiveness as taught by the Course but applying it is something else. Do you know any of your fellow students who have forgiven the world to the extent that they have achieved invulnerability or have power to heal like Jesus did?

Teacher: We all have to work where we are, not where we are not. For most students it is a challenge just to forgive in the normal sense of the word so they can cast out all grievances and be at peace within themselves.

Student: So, is there a wrong way to forgive?

Student: “Forgiveness is not pity, which but seeks to pardon what it thinks to be the truth. Good cannot be returned for evil, for forgiveness does not first establish sin and then forgive it. Who can say and mean, “My brother, you have injured me, and yet, because I am the better of the two, I pardon you my hurt.” His pardon and your hurt cannot exist together. One denies the other and must make it false.” T-27.II.2

Teacher: So, what is the wrong approach according to that text?

Student: It appears that we need to avoid the attitude of superiority

Teacher: Read this to discover the correct approach.

Student: “Forgiveness recognizes what you thought your brother did to you has not occurred. It does not pardon sins and make them real. It sees there was no sin. And in that view are all your sins forgiven.” W-pII.1.1

Teacher: So, what is the difference between the incorrect and the correct approach?

Student: The wrong-headed approach is the one used by most religious people in that they see the sin in a brother and forgive because of their moral superiority. When the student has the right approach, he will see his brother as a Son of God as himself and see the mistake as an illusion that does not even exist in the true reality so there is nothing to forgive.

Teacher: I think we can assume that we must take this step, which is something we can believe we can achieve in this life, and when this happens the door to greater miracles that can manifest.

Student: Good advice that reminds me of one of my favorite sayings of Jesus. Let me read it to you:

“He that believeth on me, the works that I do shall he do also; and greater works than these shall he do; because I go unto my Father.” John 14:12

Teacher: The promise of doing even greater words than Jesus is quite profound. It should provide encouragement for all seekers of truth. Applying forgiveness to the best of our ability is a significant step in the right direction.