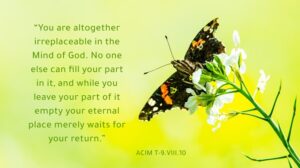 ACIM Conversations, Part 15
Is There Duality in Heaven?

Student: I’ve been discussing duality with some students and they insist that the teachings in the Course on oneness prove that there is no duality in heaven.

Teacher: So, if there is no duality this would mean that there would be no such thing as more than one of anything. What do they say about the teaching that in heaven you have the Father, the Son, The Holy Spirit and angels? They add up to four, not one.

Student: They say that anything that seems to be dual is just presented that way for teaching purposes – that language cannot convey the truth.

Teacher: Sounds like they think that Jesus wasted a lot of time in transmitting the Course containing a half million words. Read this:

Student: “I have made every effort to use words that are almost impossible to distort, but it is always possible to twist symbols around if you wish.” T-3.I.3

Teacher: Note that Jesus said he made every attempt to communicate so clearly that it would be almost impossible to distort his words. Let us see what his words really said. Suppose heaven had no parts within it but just one lonely life. Would presenting heaven as consisting of the four lives – the Father, Son, Holy Spirit and angels represent an attempt at clarity?

Student: I’d say that would add to the confusion. If heaven had no duality and he wanted to be clear, as He says, then he should not have talked about the life of God as consisting of the four divisions.

Teacher: And we have already discussed how the Course teaches that the Sonship is composed of many parts.

Student: Yeah, if he were really trying to be clear then why would he speak of the Sons of God in the plural many times, if there is not more than one.

Teacher: Actually, proving duality to your friends should be quite easy for the evidence is overwhelming. First consider this. A complete non dual state would be one of nothingness and no existence at all. That is pretty much the view of the after-death state by the atheist. As long as there is life there is mind and mind has the power of decision as expressed here:

“The power of decision is our own. And we accept of Him that which we are, and humbly recognize the Son of God.” W-pI.152.10

So, how did we use the power of decision in a negative way, according to the Course?

Student: We decided to create a world where we could be separate from each other.

Student: “And what can think has choice, and can be shown that different thoughts have different consequence.” T-31.V.14

Teacher: Our thinking of separation certainly had a consequence, didn’t it?

Student: It indeed seems to have.

Teacher: If we have perfect freedom, as the Course teaches, and we think, and choice is always allowed then there must be more than one thing to choose from. Does that make sense?

Student: Yes. I understand we have the freedom to follow the will of God or not follow as we did in the separation.

Teacher: So we have established that there can be no such thing as choice without duality. Have you considered the Law of Cause and Effect which exists in heaven?

Student: Never thought about that, but cause and effect are two things and could only exist in duality.

Teacher: Read what the Course says about it.

Student: “If I intervened between your thoughts and their results, I would be tampering with a basic law of cause and effect; the most fundamental law there is.” T-2.VII.1

Teacher: This is the most fundamental law of all. We are told that God is the great cause in the universe, but what is the main effect He produces?

Student: The universe, I suppose.

Teacher: Close. Consider this quote: “Cause” is a term properly belonging to God, and His ‘Effect’ is His Son. This entails a set of Cause and Effect T-2.VII.3

Is a set one or two things?

Teacher: And I said you were close when saying the effect of God is the universe. Read this quote:

Wow. So saying the effect of God is the universe and the Son is saying the same thing.

Teacher: Would you say cause and effect is one thing or two?

Student: The Course seems to call then a set or two.

Teacher: In a non-dual universe there could not be more than one life or parts, but there also could be no differences. But to the contrary the Course tells us that there are differences between the four types of lives in heaven. Check out this passage:

Student: “I and my Father are one, but there are two parts to the statement in recognition that the Father is greater.” T-1.II.4

Teacher: In a non-dual universe could one life be greater than another?

Teacher: Now check out this verse:

Student: “You were created ABOVE the angels because your role involves creation as well as protection. You who are in the image of the Father need bow only to HIM, before whom I kneel with you.” UR T 1 B 30y

Interesting. Just as the Father is greater than the Son, the Son is above the angels with a different function

Teacher: Yes the Son’s function is to create and that of the angels is for protection. In a non-dual universe would the two have different jobs?

Student: That wouldn’t be possible.

Teacher: The fourth life is the Holy Spirit who also has a job. Read it here:

Student: “The Holy Spirit mediates higher to lower communication, keeping the direct channel from God to you open for revelation.” T-1.II.5

Teacher: Would you say that is a different job than held by the Father, the Son or angels?

Student: Yes. This definitely shows there is some dualism in heaven.

Teacher: In addition, we are told that there are three tools used by the Father and the Son. The first is ideas. The Course says “Ideas are of the mind.” and “every idea begins in the mind of the thinker.” T-26.VII.4 & T-6.III.1

Obviously there exists more than one idea in the mind of God. What do you suppose the second is?

Teacher: Good. And the third is Spirit. This passage speaks of them both.

Student: “Only the mind is capable of error.” T-2.IV.2 “It is essential to remember that only the mind can create, and that correction belongs at the thought level. To amplify an earlier statement, spirit is already perfect and therefore does not require correction.” T-2.V.1

Teacher: We are told the mind is capable of error. Would this be possible if all reality were pure non dualistic?

Student: I wouldn’t think so.

Teacher: And what is the function of the mind?

Teacher: And how is Spirit different from mind?

Student: It is perfect – apparently incapable of error.

Teacher: In addition, we are told that “Spirit makes use of mind as means to find its Self expression.” W-pI.96.3.

So, what do you think? Do these three tools that God uses illustrate dualism or non-dualism?

Student: The three with different functions definitely show us dualism is involved.

Teacher: We’ve already discussed the idea that there are many parts to the Son, but we are also told that each as a unique place in the plan. Read this:

Student: “You are altogether irreplaceable in the Mind of God. No one else can fill your part in it, and while you leave your part of it empty your eternal place merely waits for your return.” T-9.VIII.10

Teacher: It plainly states that each of us has a part to play in our heavenly home that “no one else can fill.” Does that uniqueness sound like no duality to you?

Student: Hardly. It sounds like billions of us have a unique contribution to make.

Teacher: Why do you suppose that so many ACIM students believe there is no dualism in heaven?

Student: I suppose that it is because the Course places such emphasis on the oneness of God and all life

Teacher: Yet you believe in dualism in heaven, but you also believe in the oneness of life. How is your thinking different from the non-dualism group?

Student: They think that oneness means one life only with no parts whereas I see oneness as many unified parts joined together participating in the life of the whole.

Teacher: Would you think the life of God is a little like the life of our body which is one but composed of trillions of cells each having their own life?

Student: Yeah, maybe the creation of the body is a shadow reflection of the life of God. In fact, Paul in the Bible compares God and Christ to a body.

Teacher: Read this next passage telling us what our function is:

Teacher: Now tell me this. Which version of God would be happier; one that is all alone or one who shares with billions of unified lives, or Sons?

Student: I can’t imagine God being happy being all alone.

Teacher: Neither can he. Read this:

Wow. That pretty much says it.

Teacher: Now visualize yourself being God, creator of all there is, but you have no one with which to share. Can you imagine being happy?

Student: Not really. That would be the greatest of all hells. I cannot imagine being in a state of happiness without sharing.

Teacher: Neither can God.