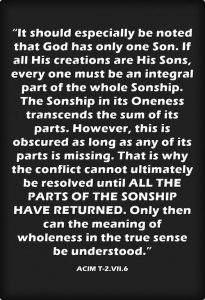 ACIM Conversations, Part 8
Is there Son One or Many?

Student: Another point of disagreement is over what the Son is. Some say the Son is completely non dual, embracing the idea that He is one life with no parts. The other side agrees He is one life but that you, I and all others are parts like cells in our body and are a part of the whole.

Teacher: Let us first look at the implications if we go with the idea that the Son is one life with no parts. How do they explain that there are billions of us Sons right here on planet Earth?

Student: A guy I was communicating with said that I am dreaming you and all the others. When I wake up there will just be me and all others will be no more, like when you dream and wake up and all the people you dreamed about are just gone.

Teacher: When you dreamed about that nice lady a while back and then woke up, who was the one who still existed in our world. You or the lady?

Student: It was me. It was such a nice dream that I was disappointed that she was no longer there.

Teacher: And when you wake up from this earthly dream, which one will be the true self or Son – you or me?

Student: Haha. I think I see where you are going. I would hope it would be me as I want to continue to exist.

Teacher: How about the guy you were talking with about this? Do you suppose he thinks he will be the one who continues existence?

Student: I would suppose he does.

Teacher: Now think of it for a moment. If this greater dream is an exact correlation to our night dreams, then there is only one entity that is real and the rest will literally disappear on waking. So, the question is – which one of the seven billion people on the planet is the real dreamer?

Student: Good question. I’m sure each ACIM student thinks it is him or herself.

Teacher: Does anyone give a reference from the Course to back up this idea?

Student: Yes. Here is the quote: “What is the same can not be different, and what is one can not have separate parts.” T-25.I.7

They say that the Son is one and therefore cannot have separate parts.

Teacher: Notice that the text says “separate parts” instead of parts. We seem to appear as separated parts in this dream state, but the Course says that in the true reality this is not the case. The Son is a unity but does have parts, but they are united parts. Here, read this:

Student: “It should especially be noted that God has only one son. If all His creations are His Sons, every one must be an integral part of the whole Sonship. The Sonship in its Oneness transcends the sum of its parts. However, this is obscured as long as any of its parts is missing. That is why the conflict cannot ultimately be resolved until all the parts of the Sonship have returned.” T-2.VII.6

Teacher: Did you notice that “parts of the Sonship” are mentioned?

Student: Yes. It looks like this passage should resolve the dispute. It tells us that God has one Son, but mentions parts of the Sonship several times.

Teacher: Also, did you notice that even though it tells us God has one Son that it speaks of Sons plural in the next sentence?

Teacher: Take a guess as to how many times the Course speaks of Sons plural rather than Son singular?

Student: Not sure. I do remember reading it written as Sons a number of times. I’d say at least a couple dozen.

Student: Wow! You could explain away a couple instances as some transcribing or editing error, but not 82 times. The author is definitely telling us that there is more than one part.

Teacher: Do you remember the parable of the Prodigal son?

Student: Yes. The Course references it so it must represent a teaching that Jesus really gave his disciples.

Teacher: How many sons in the story?

Student: Two. One stayed home with the father and the other went into the world.

Teacher: Which one represented us in the dream?

Student: That would be the one who left the Father.

Teacher: And who is represented by the Son who stayed home?

Student: I do not know. Never thought about it. Are you going to tell me that not all the Sons left heaven?

Teacher: I don’t have to. Read this from the original text of the Course:

Student: “The Atonement actually began long before the Crucifixion. Many Souls offered their efforts on behalf of the Separated Ones but they could not withstand the strength of the attack, and had to be brought back. Angels came, too, but their protection was not enough, because the Separated ones were not interested in peace. They had already split themselves, and were bent on dividing rather than reintegrating.” UR T 2 B 43

Teacher: There are two groups of Sons mentioned here. Which group corresponds to the Prodigal Son?

Student: This is interesting. Not sure that I noticed this before. Obviously, it would be the “Separated ones” who are the prodigal.

Teacher: And who corresponds to the Son who stayed with the Father?

Student: It says “Souls offered their efforts on behalf of the Separated Ones but they could not withstand the strength of the attack, and had to be brought back.” They must be Sons who never left the Father as mentioned in the parable.

Teacher: We have here two major parts to the Sonship. Those who stayed in heaven, and those who separated and came to this world of illusion. But notice that both groups are written as plural here.

Student: Yes. I see that. It speaks of “Souls” plural concerning those who never left and “Separated ones” for those who left.

Teacher: Is there any way this account could be true if the Sonship were one with no parts?

Student: Can’t think of any. I’m surprised there is so much division on this teaching.

Teacher: So, how would you sum up the true concept of the Sonship based on what the Course actually says?

Student: There is one Son, but in the eternal realm, all the parts are united as one life, even the eternal parts of the sleeping Son.

Teacher: The Course clarifies this saying that “God has but one son, knowing them all as One.” T-9.VI.3 “them all” obviously refers to the parts.

Student: This discussion has caused something significant to dawn on me.

Teacher: And that would be…?

Student: A lot of students believe there is just one Son with no parts that is awake in heaven now because of numerous references to us being the one Son or the only Son. It is true that even though we are separated and, in the dream, we are still identified with the one Son who is still awake and in heaven. But what is overlooked is that not all the Sons left heaven. There has always been many Sons who never left who are fully awake and the eternal part of ourselves are still one with them.

Teacher: Good thinking. Now, on this subject we have one more point to clarify. Remember how we corresponded our night dreams to our dream here and they didn’t seem to match? What was the difference?

Student: When I wake up from a night dream all the characters are gone and there is just me left. When the Son sleeps, many real parts are involved.

Teacher: And what has to wake up for all the characters to disappear?

Student: I’m not sure. We know that Jesus woke up, but we are still here.

Teacher: So, to correspond to waking up in the morning, apparently more than one part has to awaken. What has to awaken to make the whole dream disappear?

Student: Okay, I think I get it. The Sonship is one but with many parts so the whole Sonship must awaken. Having a few parts awake would be like me in the morning being still asleep but being slightly aware that it is time to wake up.

Teacher: Exactly, and the Course agrees with you. “Together is your joint inheritance remembered and accepted by you both. Alone it is denied to both of you. … you may not fully understand as yet that you could never be released alone.” T-31.II.11

Does our awakening fully happen alone or with others?

Student: So, according to this, I just cannot awaken alone, enter heaven and then you disappear. You must awaken with me.

Teacher: This previous quote clarifies this. Go ahead and read it again:

Student: “It should especially be noted that God has only one Son. If all His creations are His Sons, every one must be an integral part of the whole Sonship. The Sonship in its Oneness transcends the sum of its parts. However, this is obscured as long as any of its parts is missing. That is why the conflict cannot ultimately be resolved until ALL THE PARTS OF THE SONSHIP HAVE RETURNED. Only then can the meaning of wholeness in the true sense be understood.” T-2.VII.6

Teacher: How many parts of the Sonship must awaken and return before the separation is healed?

Student: All of them.

Teacher: Would you say that all the parts awakening corresponds to you waking up in the morning no longer dreaming?

Student: That sounds right. But what about you, me and others? Do they disappear?

Teacher: Their egos disappear but the real part remains. You and I will be there as united parts sharing in the mind and life of the one Sonship.

Student: I’m glad to have this settled in harmony with the Course. This talk of me or others disappearing into nothingness sounded creepy and just wrong.

Teacher: Yes, the real truth always brings peace and a sense of joyousness.