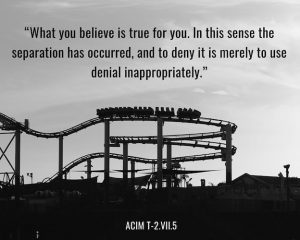 ACIM Conversations, Part 6
Is Anything Happening?

Student: Another discussion I see a lot is something that sounds kind of silly to someone who is not a Course student. It is whether or not we are here. The idea is that this world never happened and we never left heaven and are still there. Others say something did happen and we are here but in an illusionary sense. What do you think?

Teacher: The big question is what does the Voice in ACIM say about it? This is another situation where various passages from the Course, taken in isolation, can support either side of the argument. For instance, quotes used by those who say nothing happened say the physical body is not eternal and “does not exist.” T-6.V.A.2 and “The world you see does not exist.” T-28.V.7. But what about you? Does it seem that you are here living on planet earth?

Student: Yes, it seems that way to me and everyone here.

Teacher: How could that be if you are not here?

Student: Here is a passage I’ve seen quoted. It says: “You dwell not here, but in eternity. You travel but in dreams, while safe at home.” T-13.VII.17

Teacher: Yes, the Course basically tells us we seem to be here because we “travel but in dreams.” In other words, it tells us that this world seems real because we dreamed it up, kind of like presented in some science fiction movies like the Matrix.

Student: I loved that movie.

Teacher: Tell me this. When Neo returned to the real world, did anyone there declare Neo’s experience fighting Mr. Smith never happened?

Student: Not that I recall.

Teacher: Did you have a dream last night?

Student: Yes. I dreamed I was romancing this beautiful lady. It was a pleasant dream, unlike Neo’s.

Teacher: Did you actually have a dream then?

Student: I guess I would say yes.

Teacher: So, in what sense did the dream never happen?

Student: It didn’t happen in my waking world. I was kind of disappointed when I woke up and the lady was no longer by my side.

Teacher: So, it was as if the events of the dream never happened in this world, but it was a definite happening that you had the dream and the experience in the dream. Is that correct?

Student: I would have to agree.

Teacher: So, where is the true reality, and the dream according to the Course?

Student: The true reality is the eternal world that we came from before the dream began. The dream is this temporary world in time and space that we perceive with the physical eyes.

Teacher: Would you say it is literally correct to say that your dream last night as well as your dream of this world never happened?

Student: I think it is misleading to claim this without explaining the point of reference. Even though my dream did not happen in this world, it is true that I had a dream. I would also think that even though this temporary world does not exist in the eternal world, that it is still something that happened – just as my dream of the lady really happened here.

Teacher: Good point. So, even though your dream last night is not happening in this world, would you say it was a real experience?

Student: I’d have to say yes. It was an experience and I can still relive it in my mind.

Student: I’d have to say that I have had quite an experience and, dream or no dream, I’ve had a real experience. The problem is that the Course sometimes reads like nothing has happened, and other times like something has happened. Can you shed some light here?

Teacher: The answer is quite simple. When you awaken from a nightmare, you may have a sense of relief and exclaim, “Wow, I’m glad that never happened!” What are you really saying when you say this? Are you saying the dream never happened?

Student: No. I would be merely saying that the dream never happened in what we consider reality – our waking state.

Teacher: Does it make sense then that the Course is expressing a similar view when speaking of things in our world as not being real or never happening?

Student: That would make sense.

Teacher: The Course even speaks along these lines: “You recognize from your own experience that what you see in dreams you think is real while you are asleep. Yet the instant you waken you realize that everything that seemed to happen in the dream did not happen at all.” T-10.I.2

It didn’t happen at all in the waking state, but still a dream did happen.

Student: Have you found references from the Course that indicate something did happen concerning our world?

Teacher: Quite a few actually. The Course tells us the separation began with a mad idea and “the thought become a serious idea, and possible of both accomplishment and real effects.” T-27.VIII.6

Would you say that a mad idea capable of real effects is something that happened?

Student: One would think so.

Teacher: In addition, it says that “the separation occurred over millions of years.” T-2.VIII.2 To say something “occurred” is basically the same thing as saying something happened, is it not?

Student: I would think so.

Teacher: Then after this occurrence, or happening, God responded with a very significant creation. It is written that God created the “Holy Spirit, Who was God’s answer to the separation.” T-17.IV.4 “He has created the Holy Spirit as the Mediator between perception and knowledge.” W-pI.43.1

Would God have created the Holy Spirit in response to something that never happened?

Student: Must have been to have shattered heaven.

Teacher: To sum it up, we can say that when the separation occurred a good portion of the Sonship entered a dream state, and when the Course speaks of things that are not real or didn’t happen, it is speaking in relation to the eternal world.

Teacher: The Course encapsulates our situation in this quote: “What you believe is true for you. In this sense the separation has occurred, and to deny it is merely to use denial inappropriately.” T-2.VII.5

Student: Sounds like we should not deny the separation, but understand it.