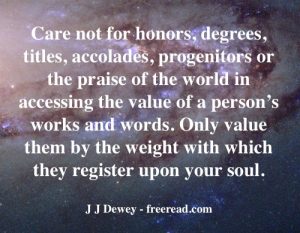 Since we’ve been hit a lot lately with the Nothingness Philosophy, I thought I would make a few more comments on it in addition to the tens of thousands of words I have already written on it. Perhaps this will be useful to some of the new people who wonder why members seem to be a little impatient in dealing with them.

Someone asked a while back what the Nothingness Philosophy is. Here it is in a nutshell.

There is a point between the dualities, between (or beyond) the high and low point of the wavelength, between light and dark, black and white, hot and cold which is neither up or down, left or right. This point is beyond time and space, has no form, but the source of all things. This point is where the true God is.

This is the point to which we must return if we desire eternal bliss. This is ironical since bliss itself can only exist as one side of a duality. Even so, this point beyond time and space, this point of nothingness, sometimes called the great void, is where believers want to go.

The question is – how do we get there?

Their teachings on this are fairly vague. The main reason for this is they say that the experience of the Nothingness Point cannot be put in words because it is beyond words. Even so, it is very desirable to be as nothingness for it is blissful beyond description.

Roughly, here is how we get to the blissful point.

(1) The world of duality is pure illusion and is basically our own deceptive creation which takes our attention away from the Nothingness Point. What we therefore need to do is let go of all creation in the world of duality. This allows us to return to nothingness.

(2) We must let go of our minds which deceive us with the illusions we see in front of us. We must empty our minds of all knowledge, past beliefs, attachments etc. and be as if we know nothing.

(3) Ironically, even though we are supposed to let go of everything to do with the mind we are not supposed to let go also of the feelings of the heart – even though the feelings of the heart are a part of duality. I’ve never seen them give any reasoning behind this. They say we are to follow our hearts which will lead us to the Nothingness Point. Some use the word “surrender.”

(4) Even though they tell us we reach the Nothingness Point by letting go, the advocates don’t seem to want us to let go of them. They seem to think that their assistance is somehow essential.

(6) You should have no interest in what others call the “real world” and let everything go. I’m not sure how the nothingness people do this since most have jobs, families etc.

(7) Meditate and put your attention on the point between dualities.

Now the recent people who have come on the group teaching this philosophy have added a new doctrine not had by most of the nothingness people. This has a Christian slant added to what is normally an Eastern philosophy.

(8) This added element is called “grace” and is very similar to the orthodox Christian teaching on the subject. By grace we are saved, but instead of being saved to live with Jesus in heaven you are saved to go to the Nothingness Point.

They are not clear how grace works but from my observation it appears to go like this.

It is by grace that you came across the teacher who has achieved the Point. Accept what he says and by God’s grace you will also achieve the point.

It seems that grace and “luck” is quite similar to these advocates.

(9) Even though we are supposed to let go of all attachments it appears there is one exception. Because eternal salvation is at stake it is of extreme importance that this doctrine be presented so people have a full understanding of the choice that lies before them. Therefore, one clear attachment seems to be OK. This is the attachment to converting the great unwashed which they attempt to do with great persistence and zeal.

Is there any truth to the Nothingness Philosophy?

Just as there is truth in every religion and teaching there is some truth to this teaching. As in all things the seeker must use the light of his own soul in seeking it out.

Question: Do you see any truth in the Nothingness philosophy? What do you think it is?

One of the problems with examining this philosophy so far is that it has never been on topic. Even so it has been perhaps discussed here more than any other item. This is because we have had so many people with differing degrees of this thinking come to the group and seek to change the topic to this doctrine.

So, even though I have written a lot on this subject, it has been mostly in response to others coming on the list insisting in a response to their views.

This is the first time I have made the subject on topic. We could probably spend a year on this topic since it always generates a lot of reaction and conflict, but instead we’ll try to make a concise covering of the subject so we do not lose the interest of our members.

Each time this philosophy has been brought up in the past it has created a lot of conflict which persists for a time ending in demands from the members to cease talking about it and move on to something new. Around this point in time the Nothingness Philosophy advocate accuses the group of being closed minded, lacking love and missing a great opportunity for bliss and quits.

What he doesn’t realize is that it is not his philosophy that aggravates people as much as his approach.

As a whole (realizing all are different) the Nothingness Philosophy advocate starts off by projecting some superior assumptions. Through his seeking he has had a spiritual experience he feels cannot be put in words and begins a debate assuming he has had this great experience that none of the rest of us have achieved. He makes no effort to ask those with whom he is having conflict what experiences they have had, but just assumes his are much superior and he needs to teach us the unteachable and unknowable.

He also assumes he understands real spiritual love and any understanding we have of it is of a lower order.

He advocates that we discover the heart seemingly assuming we have no heart.

He will often tell us we do not understand the oneness of God and all life the way he does.

He accuses us of being attached to the mind and mental constructs while presenting himself as being free from attachment. This he automatically does without doing even the least bit of checking into the point of evolution of detachment of various members.

He will often teach points of doctrine with which many here are very familiar. Even so, he assumes we know nothing and must be force fed first grade material when most are way beyond the first grade.

The point I am making here is that when the Nothingness Philosophy advocate comes on so strong and with such an insulting attitude it wouldn’t matter what his philosophy was. Members so attacked will be in no mood to find points of agreement, but will disagree instead.

I realize that there are some newer members here who follow this philosophy and haven’t posted enough to warrant the typecasting, but it has never ceased to amaze me how each of these Nothingness Philosophy advocates, even though they may proceed with a gentle start, soon will create a storm by projecting such superiority and attempting to force the group in a different direction than they desire.

Perhaps by my presenting the problem in advance this will cause these people to consider their approach and attempt to come across more in a spirit of love and harmony. Hopefully we can discuss in a spirit of reason.

That said, let us go through the various points of what we call (for want of a better term) The Nothingness Philosophy.

I call it such because its central philosophy is built around the idea that we live in the illusion of duality from which we must escape. That which is beyond duality and the origin of all things is that point between extremes which is neither up or down. It is that part of the wavelength where the crossover is made and beyond time and space. It is that reality which would remain if all form were to be stilled, all motion were to cease.

This point is sometimes called nothingness, the great void.

It’s one thing to talk in theory about this, it would be quite another to actually return to this nothingness space. But we know that such advocates have not returned.

Because they are still here with us in the world of dualities and using their dualistic minds to try to change our minds.

This is not to say that there is no truth in the idea of an originating point. I have taught this myself in the beginning of my book, The Molecular Relationship. Scientists also teach about such a point and call it a singularity from which the universe began with a big bang.

Here is my thinking on the matter. Life as a whole does not return to the singularity until the end of the universe wherein we shall rest in a great pralaya until another universe comes into existence. Even here we do not rest in nothingness, but that which is hidden, or esoteric.

So where do these people go who say they have discovered the bliss of the formless God or the great void and have made the return?

Most of them have discovered a higher astral feeling which is quite joyous but far from the absolute or the ultimate. They think they have moved beyond the astral when they have only moved to a higher level of the astral. Keep in mind that there are seven levels in the astral realm and the highest seems like heaven compared to the coarser vibrations of the lower.

We’ll skip the mind because these people see this as an obstacle and go to the Buddhic plane. This is called the first formless world though it is called so, relatively speaking, because form is not used as a vehicle there as it is here. This plane has a higher level of spiritual peace, but few have a polarized consciousness on this plane.

What would one have to do to reach the originating formlessness?

He would have to leave this world behind completely and ascend beyond where even Christ has gone past all the planes of the astral, mental and the four higher planes and then move on past the Planetary and Solar Logi through the cosmic astral, cosmic mental etc.

The fact that the Nothingness Philosophy people are still here in the physical tells us they have not found the ultimate reality. They may have found something wonderful, but far from the ultimate.

Now let us move on to the second point which is this: (2) We must let go of our minds which deceive us with the illusions we see in front of is. We must empty our minds of all knowledge, past beliefs, attachments etc. and be as if we know nothing.

How about this? Is the mind a great benefit or an obstacle to be removed – or perhaps a little of both? Do we need to release ourselves of our attachments? How do we do this? We’ll discuss this next.