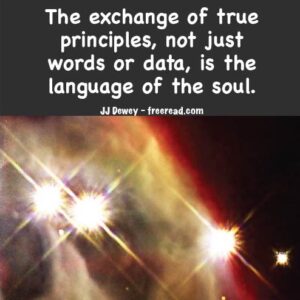 A reader commented on the various interpretations of the verse which reads: “Except a man be born again, he cannot see the Kingdom of God.”  Her pointed out that the Greek word for “again” is “ANOTHEN”, and it implies something from above, from a higher place or heaven. He figured this information may change the common meaning of the verse.

This is not so much a conflict in interpretations past, but an additional insight instead.

Remember that the words of the Spirit, or Eternal Words, often have a number of correct interpretations and correct applications.

Most Bibles do translate the phrase as “born again” but others use “born anew” or “born from above.”

It is understandable why the phrase “born again” is the most common translation for when Nicodemus heard Jesus utter it he asked: “How can a man be born again when he is old? Can he enter a second time into his mother’s womb?”

This tells us that when he heard these words he understood them to mean some type of rebirth. But the interesting thing about languages is that often there is not an exact translation from one to another. As is the case with many words this seems to have several meanings.

Paul was speaking of the spiritual rebirth when he said: “And be renewed in the spirit of your mind; And that ye put on the new man, which after God is created in righteousness and true holiness.” Eph 4:23-24

Question:  Will Zion first be established in the Middle East?

Zion will eventually be established in all parts of the earth. It is unlikely the Middle East will be first, but it will eventually have its turn as setting a spiritual example for the planet.

In response to this I wrote the following:

Many see conflict of hypocrisy in accepting the commandment “thou shalt not kill” and the support of a war, however just.

There is no conflict here as far as the Bible is concerned. The word “kill” in “thou shalt not kill” comes from the Hebrew RATSACH, which basically applies to murder and is not used in relation to death pertaining to war. The word used for capital punishment and death in war is MUWTH. There is no commandment against MUWTH, but is instead commanded in certain circumstances.

In fact the Bible decrees, “The murderer (from RATSACH) shall surely be put to death (MUWTH)” Num 35:18 To put a murderer to death is not murder (RATSACH) according to the Bible, but a justified execution (MUWTH).

The Bible does not condemn war but approves when considered just. Moses was commanded to go to war against the Canaanites and even of Jesus it is written “In righteousness does he judge and make war.” Rev 19:10

Question: Does anyone know any good translators who can translate the Bible from its original language so that once and for all Christians and non-Christians alike could understand and know how to apply what is written? This will assist in enlightening the masses.

JJ: A number of the more modern versions are more accurate than the old King James, but then some of them take more license and concentrate on style rather than accuracy. One of the difficulties in obtaining an accurate Biblical translation is that sometimes there is no exact English word that conveys the full meaning of the ancient Hebrew or Greek. Even so, there are several versions that will be helpful in your studies.

Overall, I have found the Concordant version to be the most accurate and unbiased of all translations. You can buy the complete New Testament from them, but they do not have all the Old Testament. However, they have the most important books that can be purchased individually such as Genesis, Isaiah, Daniel etc.

The only trouble with the Concordant Version is that so much effort was taken to make it literally accurate that it is fairly dry and difficult reading – even more so than the King James.

Here is the best way I have found to read the Bible. Have before you three translations and Strongs Concordance as you read.

First, find a Bible that is fairly accurate but also is easy reading in English. For me this is the New English Version. I bought this in England in 1964. I haven’t seen this for sale in America, but just checked with Amazon.com and they do have it. It has since been updated in another version called The Revised English Bible which I have not yet purchased.

There are downloads of several versions of the Bible free online. One in more simple English is the English Standard Version. Here is a link:

A fairly accurate easy reading version will convey the basic information for about 70-80% of the Bible. Where the basic idea is easy to convey there is not as lot of need for a deeper look into a better translation. Then there are the more mysterious passages that you want to check out. This is where you go to the second step. When this happens pull out your Concordant version and study the questionable verses.

You can read the Concordant version of the New Testament HERE

I do not believe they have any of the Old Testament online, but you can buy part in hard copy.

Next, if you feel you still have not gotten the full meaning, pull out the old King James and read the verse there. Look for key words that will clarify the meaning. Then open your Strong’s Concordance and look up the Greek or Hebrew meaning of the words.

In addition to this use the Concordance to find how the word is used in context in 6 locations, if that many are available.

This takes some time, but can be very rewarding and enlightening. If you do this right you will be able to grasp the original meaning as well as many scholars.

If you do not have a Strong’s you can go to Blue Letter Bible at www.blueletterbible.org

This has the basic Strong’s material and many other reference helps.

If you wish to read a good commentary on the New Testament the best I have found is the Daily Study Guide by William Barclay. I haven’t found one I liked that much for the Old Testament.

Reader Comment: I don’t know how much they could edit. The meanings of 2000 year old Greek words don’t change overnight.

JJ: It doesn’t matter whether words are 2000 years old or two days. The translations of words from one language to another is a tricky. A translation can easily change overnight. All you need is a new set of scholars with a different opinion authoritatively stating that their version is more accurate.

Case in point: Even though we have hundreds of translations of the Bible, new scholars are still coming up with new translations and adding new nuances to the 2000+ year old words.

Just as the Bible is a translation even so is a concordance a translation, just a more exhaustive one for the various words.

Even among Concordances we have different meanings applied to various words. Strong’s is the most famous one. The second in line is Young’s and this differs quite a bit on the meaning of many of the words from Strong’s. I find Young’s to be less accurate, but more in line with orthodox Christian dogma.

Even so, many have still recognized Strong’s as the standard bearer which has stood the test of time.

“Two and two continue to make four, in spite of the whine of the amateur for three, or the cry of the critic for five.” James McNeill Whistler