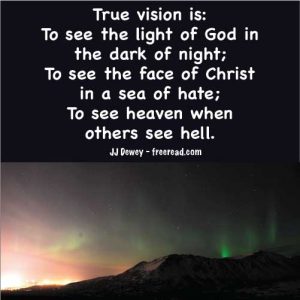 We mentioned last time that each stanza of the Great Invocation has invocative energy pertinent to the return of the Christ. The question is how each stanza applies to his return.

Just as all inspired words have multiple interpretations (or multidimensional interpretations) even so it is true with the Great Invocation. A large part of the reason it was given out was to prepare for the return of Christ, but it does have other applications. Even so, let us concentrate on how it applies to the return.

From the point of Light within the Mind of God Let light stream forth into the minds of men. Let Light descend on Earth.

We often only think of love in relation to Christ forgetting that he proclaimed the words: “I am the light of the world.”

Light precedes love. Light and love are interdependent. If we are to prepare our hearts to receive the love of Christ we must first increase the light of Christ so the love can be recognized, received and embraced.

From the point of Love within the Heart of God Let love stream forth into the hearts of men. May Christ return to Earth.

Notice that the return is invoked in this stanza. This is because Christ represents the second ray of Love Wisdom and this is the quintessential energy that he will wield.

From the centre where the Will of God is known Let purpose guide the little wills of men – The purpose which the Masters know and serve.

What is that will? Part of that will is that Christ return to minister to humanity here on earth. Seeing the return as part of the will of God as saying the invocation will increase its power.

Not only is Christ the Light of the world and represents the love of God, but he has much to do with manifesting the will of God. Nowhere is this more evident than in the Garden of Gethsemane where he yielded to the Will of God by saying, “not my will but thine be done.”

From the centre which we call the race of men Let the Plan of Love and Light work out. And may it seal the door where evil dwells.

The race of men (you and I) must work out certain problems and do our part in preparing the way for his coming. Part of this working out is the sealing of the door of evil. This evil is not evil as defined by most people. Instead, DK equates it with a door that can open an opportunity for evil which can take away free will as represented by Nazism. This is the evil that can take away the freedoms of the world and undo the progress we have made. Many minimize the real threats and look for evil where little exists. We must find threats to freedom where they truly exist and shut the door on them so they have no power.

“Let Light and Love and Power restore the Plan on Earth”

Is part of the mission of Christ to restore the Plan, or at least part of it? Yes, but this cannot happen unless we have a free flow of light and love and power.

Power not only includes the spiritual, but a free flow of new sources of power for transportation, manufacturing etc.

Question:  The verse from the Gita that we quoted said: “Whenever there is a withering of the law and an uprising of lawlessness on all sides, then I manifest Myself.

For the salvation of the righteous and the destruction of such as do evil, for the firm establishing of the Law, I come to birth age after age.”

Here we are told that one of the reasons a periodic Messiah is needed is “a withering of the law and an uprising of lawlessness.” Then we are told he will come “for the firm establishing of the Law.”

What kind of Law will Christ establish? Ten Commandments, Law of Moses, Law of Love, civil law or what?

What does law have to do with the Seventh Ray and the Age of Aquarius?

I think most disciples realize that the mission of Christ will not be to reinstitute some strict Law-of-Moses type code. But neither will he promote a flower-child type situation where anything goes. In fact, it is unlikely that he will have any civil authority over the nations at all. If he has no civil authority then how can he institute any laws?

Even though his plans are not given out, we can assume it is highly likely that he will come as a teacher and concentrate on those items of which the world is in the greatest need. As world leaders begin to take notice of him he will obtain power to counsel them and influence the direction of their governments and legislation.

In addition to this he will gather around him trusted disciples who have earned authority and a direct influence. Concerning these DK says:

“Today the Christ is carrying forward the same great task and in the spiritual significance of His imminent Coming (and in the language of symbolism) He and His nine thousand arhats will strike a second blow at the world glamour. It is for this that we prepare. Only the intuition can dispel illusion and hence the need of training intuitives. Hence the service you can render to this general cause by offering yourselves for this training. If you can overcome glamour in your own lives and if you can, therefore, comprehend the nature of illusion you will help in

Christ therefore will have thousands of disciples to assist him in teaching, influencing the powers-that-be and establishing new orders.

While it is true the law of Christ is governed by the law of love which is written within our hearts, it is also true that there are only a small percentage of humanity who sense this law accurately and are able to abide by it.

A reader mentioned that we will only have the laws of Christ when he comes, but this refers to those who will gather around the Christ and will have a degree of soul contact. What about the great unwashed out there? We must realize that the new age will bring progress for humanity, but the average person will not be a lot different than he is today. He will still rather drink beer and watch football in his spare time than to learn from the feet of the master.

Therefore, for the civilizations of the earth as a whole, standard civil law as we understand it today will still be necessary. We will need laws to protect us from murder, theft, rape etc. Even so, there will be some major revisions.

There are several problems with civil law today.

“Of the increase of his government and peace there shall be no end, upon the throne of David, and upon his kingdom, to order it, and to establish it with judgment and with justice from henceforth even for ever.” Isa 9:7

Greater justice, or more appropriate punishment to fit the crime will be sought.

The only ones who should be sent to prison are those who commit violent crime or refuse to make restitution to the victim.

The prison system is often called a “correctional” program, but few do anything to assist the prisoner in the direction of correction. Instead of making punishment the top priority, correction and education needs this status. This is too vast of a subject to cover here, but it does need the attention of society.

We could add to this list, but this suffices to give the needed idea.

The Seventh Ray, which is growing in strength, governs law, ceremony and business. The coming of Christ and the Masters with him will infuse all three of these categories with new life and justice.

One prime point of attention will be the teaching of ceremonial magic on a somewhat scientific basis. In other words, certain types of symbolic gestures, accompanied by thought, will produce certain results that can be duplicated at will.

This will be discussed in greater length later on.

DK writes: “The reason He has not come again is that the needed work has not been done by his followers in all countries.” The Reappearance Of The Christ, Page 12

It’s been many years since he wrote this. Has much preparation been done in this time? What else needs done to prepare for the coming of the Lord?