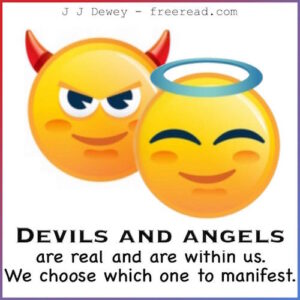 Who are the Devils and the Sorcerers?

We left off with this verse:

“And the rest of the men which were not killed by these plagues yet repented not of the works of their hands, that they should not worship devils, and idols of gold, and silver, and brass, and stone, and of wood: which neither can see, nor hear, nor walk: Neither repented they of their murders, nor of their sorceries, nor of their fornication, nor of their thefts.” Rev 9:20-21

So, who are the Devils and the Sorcerers?

It seems odd in this day and age to consider the idea that people still worship devils. It is true that there are rumors of a handful of Satanists who may openly worship the devil, or devils, but surely that wouldn’t include the next door neighbor or the friendly mailman – or could it?

How could this be?

Since we do not see the general worship of devils permeating society then perhaps, we must look at the meaning of the word. Perhaps believers do not understand what was written in the ancient scripture.

A reader did some research into the Greek word for devils. He writes: After looking up “devils” I found that in most instances the word comes from the Greek “DAIMONION” which is a ‘neutered’ (yes, neutered as in ‘no gender’) derivative of the word DAIMON which comes from the word DIAO: to distribute fortunes. Hmmmm.

With the ‘added info’, DAIMONION is a ‘demonic being’ a deity devil, god.

The word DAIMON also means a demon *or* a supernatural being of a bad nature. (End quote)

This word is used a lot in connection with the mission of Jesus. Time and time again he cast out devils and the people were healed. These were not people foaming at the mouth like the possessed in a horror movie, but many were just ordinary people who were sick. What was it that Jesus was casting out that was making the people ill?

To answer this question, we must ask ourselves what makes people ill in our day that is related to life force that the ancients may have called a devil?

It is basically accepted that when one is in good health he has a good flow of vital force, but when something saps that vital force and draws from it, competes with it, or prevents it from flowing, ill health results.

Let us take cancer for instance. A cancer is a life unto itself that competes with the life of the body and saps it of its strength. This could be called a devil in the fact that when it is cast out the person is healed. Is it possible that Jesus spoke to the life occupying the cancers of the victims in his time and merely commanded them to leave? He thus cast out the devil of cancer and healed the sick.

In addition to physical growths, we have negative spiritual growths or thoughtforms which plague the sick person. It is widely recognized that attitude is a powerful factor affecting health, but what is not so well known is negative thought and attitude can create the devil of a thoughtform occupied by a vampire type life form that can debilitate a person.

How does a thoughtform cause an illness? By a number of methods. I’ll just name three.

(1) By fear. The person’s fears draw negative astral matter that create a vehicle for a looming devil that reminds us again and again the words of Job.

“For the thing which I greatly feared is come upon me, and that which I was afraid of is come unto me.” Job3:25

(3) Placing subtle thoughts on the benefits of illness. Often when the person gets ill, he discovers that he gets more attention and sympathy from loved ones. He puts his attention on this benefit and thus allows the negative thoughtform to feed on his life energy.

People thus worship, or give attention to, devils that sap them of their strength. These negative thoughtforms need to be cast out for the body to be whole.

Foremost, we need to consider the devil that effects more people than any other, and causes illness spiritually as well as physically.

This is the devil of misplaced authority and is the key to understanding the Beast which shall be discussed in chapter 13 of Revelation.

God dwells within us. That is where He can be found, but when we place our attention on any life outside of God then that misplaced focus becomes the worshipping of devils.

One of the definitions of devils is a “false God.” He who takes the place of the God within may be a prophet, priest or king without who is seen as a spokesman for God and whose word are given the authority of God.

Giving authority to the words of man as if they are the words of God is akin to worshipping a devil, or a false God.

The last part of the verse compliments this subject and is easier to interpret.

“…that they should not worship… idols of gold, and silver, and brass, and stone, and of wood: which neither can see, nor hear, nor walk.”

Many students interpret this to mean that humanity values their possessions that have no life more than they value the living God. There is indeed truth to this thought.

So, how do we interpret this verse as it applies to the disciple who has opened the sixth chakra and whose sight has pierced the world of the intuition?

The message is basically this. Even such an advanced disciple has only destroyed a third of his attachments to outward authority, methods and physical form. He still has a long way to go to let go of the lower world and dwell entirely in the world of Spirit.

The next verse reads:

The disciple who has opened the sixth seal (chakra) but not the seventh still struggles with returning illusion and is not fully tuned in to the will of God. He may not be a murderer or thief in the normal sense but he unwittingly supports a system that encourages:

[1] Murders. This can occur through supporting unnecessary abortions, misdirected wars on crime and drugs, corrupt prison systems that murders the souls of men, a lack of protection for the innocent from real criminals.

Another big item would be a misdirected war, especially a war for selfish purposes, which enslaves the souls of men. But this is not a black and white issue and the second key of knowledge must be used. A war can free the innocent and save lives. Over 80% of the American people were against stopping Hitler before Pearl Harbor. This delay and lack of support for Britain caused the death of many souls physically and spiritually. In this case it is obvious on hindsight that those who opposed going to war had the blood of the innocent on their hands and just about supported the extinguishing of an entire race of people – the Jews.

[2] Sorceries. This comes from the Greek PHARMAEIA. The modern words “pharmacy” and “pharmaceutical” come from the same Greek root as this word. In fact, one of the definitions of PHARMAEIA is “the use of administering drugs.” Some of these ancient drugs that were used by the doctors of the time were so powerful they were seen as supernatural in effect and the druggist was seen as a sorcerer.

Think not that only recreation drugs is condemned here. We must realize that legal drugs cause far more pain, suffering and death than do the illegal ones.

Is the world repenting of the sorcery of drug dependence? Not hardly.

As far as the disciple goes, he has usually mastered physical drugs and is not affected by them, but he is still attracted to the pull of the physical plane. This has an influence, like a drug, deluding him from time to time into thinking it has more to offer than the spirit.

[3] Fornication. In the Old Testament those who committed fornication were those whose heart was taken off the living God and placed upon non-living idols. In other words, those whose heart is linked to the possessions of the world are guilty of this.

[4] Thefts. In addition to regular theft there are many who take from the Creator that which is rightfully his. By focusing on the material rather than the spiritual side of life we steal from ourselves and from God that which is our true destiny.