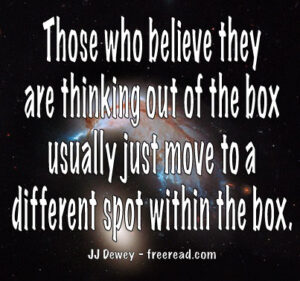 Reader: I feel sorry to hear a heavy emotional charge in the comments. It seems that all I am saying is being refuted regardless of what I am saying.

JJ: I think the refutation began with you refuting what many here write and believe – or at least what you assume they believe.

Reader: Among other things I see a need to defend a supposed attack upon the so highly valued free will, this little expression of the little self, which is almost considered as holy in the western world. But this is not what I meant.

Let there be no doubt; I will be the last one to challenge the free will of humanity (in fact it is not a free will but rather a freedom of choice).

JJ: Excuse me for misunderstanding. Here are your words: “All the lofty talk about freedom is imaginary and illusory and misleading when it is not understood that each human being is not free at all in this world.”

I am glad to hear your clarification, which tells us that you do believe in some free choice after all.

Reader: I only offer a more Universal view – which some consider to be more eastern coloured – which may invite people to look out of the box of materialistic conventions and traditions, which is so pressing in our western world, and which is being considered here as the one precious export product to the rest of the world.

I have offered both a spiritual and humanitarian view regarding the law of free will and the Law of Absolute Freedom. I have tried to make this clear as far as this relates to humanity in its attempts to become spiritual.

JJ: What you do not realize is that many have come to this group before you in an attempt to teach from a similar view as yourself. I thought you had a different twist because you said we have no free will, but now you have clarified your views we see you your doctrine is basically the same as we have heard many times before, even though the presentation may be slightly different.

The problem here is not that you represent Eastern thought, and we the West, for many in this group have synthesized both the East and the West.

The problem seen by many of us is that you represent a western version of eastern philosophy in which we see major flaws. These flaws are similar to what we see in some fundamentalist Christian religions that have a similar belief to you but merely use a different vocabulary.

You, and those before you, seem to think you are presenting us with fresh thinking that we have not heard before. On the contrary, we have heard it many times, thought it through, seen its flaws and retain that which the soul verifies.

When a teacher such as yourself comes here and we do not fully accept him he always thinks the problem is that we just do not understand what he is saying. We do understand and that is why we see the flaws. If you were to peruse the archives you would see that just about every point of your teaching has been covered. Even so, I usually comment briefly when a new challenger comes on board because each teacher gives a slightly different slant on the same material.

Now, even though we see flaws in your philosophy we also see some truth in it. For instance, the idea that we are trapped in matter and suffer limitations here is certainly one that is true.

The pattern followed by teachers such as yourself has been almost exactly the same so far. They stay for a few months and make a great effort to help us to see the error of our ways. When we do not totally accept, they figure we just do not understand and continue to hammer away. Then, after a month or two, when it is seen that no converts are made, they will leave. We have yet to see one stay and just attempt to be a positive member of the group and participate in the classroom topics.

Reader: All I have done is to invite people to look beyond all appearances and even beyond conditioned spiritual views and thus beyond themselves; in fact it is the invitation to look beyond the opposite poles of duality of good people and bad people. There is more than that. Not seeing this is missing a higher level of spirituality, exactly as Buddha told so urgently to his bikkhus. For it is time.

JJ: Many here have already done this. Why do you assume we are a bunch of spiritual country bumpkins? If you want to present something new tell us what is next – after we have seen Nirvana.

Reader: Besides being free of the ego self does not mean that the spirit within is free. And the latter the only interest of the Cosmos. This is the second part of the Buddha paradox.

My point is that I am constantly directing to the other [divine] shore and to see things from that focus. And all that I am hearing is an emotional attachment to the idea of free will and the effect of it on this plane. Free will is only an idea of the lower ego mind, necessary though to have it in the dream state of humanity. It may help him to eventually see the final choice, which is not to choose anymore.

JJ: First let me explain the Buddha Paradox to the group in plain English. It is basically this:

This world is illusion. We must dispel the illusion by letting go of all attachments to the past present and future, to form, ego, consciousness, everything the mind and feelings register.

When this is successfully done then everything is as if it has never been and we obtain oneness with the ALL which is really nothing, or the great void between dualities.

Now the paradox is this. It seems obvious to us that we have an existence, identity and consciousness on this shore, but as soon as we step on to the other shore it will be as if this universe and the people in it never existed. Actually, we never did exist and do not exist because when we get there we will have absolutely no knowledge that we ever came here and had this experience. The One Life will continue on with no knowledge this universe ever existed, even though IT created it through his own power.

This is the paradox. It seems that it is impossible that we even seem to exist since we don’t exist.

Now the reader claims to be seeing from the other shore, but this is impossible, according to the Buddha Paradox, because if he was on the other shore, he would have no knowledge of this world and would not even know that he has ever had an illusionary existence.

Again, we return to the Nothingness Philosophy.

Some may wonder how a great teacher like the Buddha could have taught this.

He didn’t. The Buddha Paradox is created by mislead disciples.

Listen to the words of the Master DK speak of the “other shore” who sees from an angle of vision beyond that which was available to the Buddha in ancient times:

“Hearken, O Chela, to the call which comes from the Son to the Mother, and then obey. The Word goes forth that form has served its purpose. The principle of mind (the fifth principle. A.A.B.) then organises itself, and then repeats the Word. The waiting form responds and drops away. The soul stands free.

“Respond, O Rising One, to the call which comes within the sphere of obligation; recognize the call emerging from the Ashram or from the Council Chamber where waits the Lord of Life Himself. The Sound goes forth. Both soul and form together must renounce the Principle of life and thus Permit the Monad to stand free. The soul responds. The form then shatters the connection. Life is now liberated, OWNING THE QUALITY OF CONSCIOUS KNOWLEDGE AND THE FRUIT OF ALL EXPERIENCE. These are the gifts of soul and form combined.” Esoteric Healing Pages 501-502

Notice the part I placed in caps. It will not be as if we never existed, for when liberation comes, we will own “the quality of conscious knowledge and the fruit of all experience.”

This just goes to show that there is no such thing as a true paradox, but only that which has the appearance of a paradox. When all the truth is seen then one puzzle of truth fits in with every other piece.

Reader quoting me: “Why do you assume we are a bunch of spiritual country bumpkins? If you want to present something new tell us what is next – after we have seen Nirvana.”

Reader: What I see is a heavy attachment to earthly things even when it is admitted that the soul is trapped in matter and does suffer limitations.

JJ: How loving of you to make such a judgement with no evidence.

Reader: Since you said that all has already been explored and searched out in this classroom, I would like to see then the two main Principles that would make it possible to step out of the box that is called the physical Earth. There is no need to say that this is not possible, for it is.

The first one is the Principle of letting go our imperfections, desires etc,

The second one is the Principle of Transfiguration that allows the New Man to evidence himself within.

Showing the way is one thing, but accompanying him on his way is another thing.

JJ: First, I see no evidence that you have any ability to accompany anyone here anywhere.

Could you please explain what the Principle of Transfiguration is?

Okay, here are what I would say are the two main principles that lead to liberation.

When you do this, even if it is wrong, if you have pure intent, you will discover your error and the right choice will manifest.

(2) When the better path manifests, let go of your investment in the past and chose the new.

If you do these two things with an honest heart complete freedom awaits you.