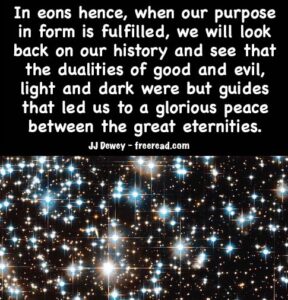 The Flood and Karma

Question: Can you shed some light Atlantis, Enoch and the flood?

JJ: According to Theosophists Atlantis developed on two large Islands and a third smaller one over millions of years reaching its peak around a million years ago.

Ruta and a part of Daitya suffered a great catastrophe about 850,000 years ago and sank. This did not happen instantly, but over a period of time.

The second great catastrophe happened about 200,000 years ago with the final submergence of Daitya.

The final sinking occurred about 9564 BC with the sinking of Poseidonis. This was the Atlantis referred to by Plato.

Since that time there have been other floods and catastrophes. The flood of Noah could have referred to a large regional flood around the time specified in the Bible or it could be extended to symbolize the many floods which have occurred in history where the Brotherhood have worked to salvage a few enlightened souls to begin anew.

Because we have such a long history it makes it difficult to place legendary characters in their right place in history. Some believe that Enoch was Hermes, the legendary son of Zeus.

The truth is Hermes was a great teacher of ancient date who is said to have lived 12,500 years ago, written over 24,000 books on every subject one can imagine and designed the Great Pyramid.

Another Reader comments: I came across this principle in a book (The Revelation Of Ramala) and would like for you all to run it past your soul and tell me if you think it is correct.

“A person cannot be the cause of another’s death unless the person responsible for the death is of an equal or higher level of spiritual evolution.”

If you think that this principle is difficult to work in a war, the second world war for example, Hitler and Churchill were basically responsible for many of the killings and not the soldiers themselves. These two were both advanced souls.

JJ: This is a teaching with a thread of truth, which if misunderstood could lead to disaster.

The thread of truth is this.

In war conditions a commander who orders men into dangerous situations should be more highly evolved than those whom he commands. For instance, Washington and Lincoln were highly evolved souls who ordered many men into life-or-death situations. There is nothing worse than for a highly evolved soul to be under the command of an ignoramus. But the lesser evolved can be inspired by the more intelligent, even if it be an evil genius such as Hitler and such people will risk death because of respect for the one giving the command.

The illusionary and wrong interpretation of this is the highly evolved have a life and death power over other souls.

David made this mistake and had Uriah killed so he could have his wife Bathsheba. The Bible tells us he was condemned by God’s prophet for doing this.

The higher evolved can lead others into danger for a great cause and be justified, but if they take the life of another with selfish intent, either high or low, they will suffer the effects of karma just like anyone else.

It would have solved a problem for Jesus if he had just killed Judas, but such a thought never entered his consciousness. If he had acted on such a thing he could not have been the Christ.

Of course, the circumstances of the death will determine the ultimate effect. If a person has to take a life in self-defense, then the true cause of that death is the attacker, not the one forced to defend. If you jump off a cliff and kill yourself the cause of the death is your decision to jump, not the gravity that pulled you to your death.

Now the effects I am talking about are divorced from emotion. Add emotion to the problem and the results will be different, even with gravity.

Two people fall off a ladder and break their arms. In the same circumstances they suffered the same effects.

Now add emotion in the mix.

The one man is optimistic, heals fast and goes back to work.

The second man is negative, fearful and refuses to get on a ladder again and loses his job. He feels even God is against him and his life is ruined.

The two men suffered different effects not because of gravity, but because of the added cause of emotion that they placed in the circumstance themselves.

The main difference between the highly evolved and the lesser is the emotional ingredient. Both suffer the same effects from cause but the truly spiritual person will not add in an extra negative emotional cause to add more pain to the situation than necessary.

Question: Jesus said to the Father when He was on the cross, something to the effect of “Forgive them Father, for they know not what they do”….. so if the *Father forgives* does this in effect, wipe out the karmic debt to be repaid to/by those people or race;….. or from “forgiveness” from a higher entity such as the Christ etc, does this stamp out cause and effect or karma for people via the Lords of Karma?

JJ: To forgive does not release another from the results of his karma or cause and effect.

Forgiveness relives the people from the emotional condemnation. Lower emotion is created by the interplay of mind and etheric energy and is a temporary energy full of illusion. This illusion is dispelled through forgiveness but cause and effect in the physical and the world of mind continue.

Jesus was aware that those who put him to death did not know what they were doing but felt they were righteously doing their job. This included the Roman soldiers and most of the Jewish leaders. He knew that many would later realize they put an innocent and righteous man to death and when this realization came, he didn’t think they deserved to suffer because of emotional condemnation of themselves. He wanted the Father to safeguard them from this future emotional torment.

Seeing the movie, The Robe, would add understanding to this. Richard Burton played the Roman soldier who wound up with the robe of Jesus. After he realized what he did he suffered excruciating guilt and pain. This is what Jesus wanted the forgiveness to nullify.

If you haven’t seen this movie, I would suggest you rent it.

Question: However, was not Hitler the effect from a cause set in motion via the Jews or their race? If Hitler was an effect to a cause of something the Jews did in the past, perhaps even from Jesus’ time on Earth, then the effect was still there for them, and so, did the Father really forgive those people (Jews?)

JJ: First, Hitler would have surfaced with or without the Jews. Killing the Jews was more of an afterthought for him. Even if the Jews did not exist he would have sought for power and convinced the people of various enemies who needed to be destroyed to secure his power.

Only a handful of Jews had anything to do with the death of Jesus and this event had little to do with the problems the race had in Germany. The cause of their problems there was because of various seeds of exclusivity that had to be worked out. The peaceful existence the Jews enjoy in the United States is a foreshadowing of what they need to accomplish world-wide.

Wisdom is knowing what to do next; virtue is doing it. David Starr Jordan (1851 – 1931), American naturalist