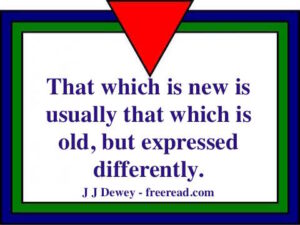 The Old is Not New

Our challenging reader continues: DK illustrates the error in your reasoning about the paradox of Buddha. Let me explain:

First of all: While it is right that evidently the lower self never existed and so the physical universe did not, which is entirely True seen from the Cosmos i.e. monadic level, since this is all but a dream; yet the dream life in this dualistic world is as real to each of us participating in this dream. It is as if a computer is projecting a game on the screen, and the (living) figures on the screen only see each other and their surroundings. For them this surreal world is real.

JJ: The correspondence does not fit. The figures in the computer have no self-consciousness, or consciousness itself, as do we. Neither do images in a painting correspond to entities of consciousness.

Reader: Take a needle and pierce yourself in the arm. You are not dreaming and life in this dream is as real to you as it is real to me. Yet in an expanded consciousness we can perceive this state as a dream and consider the body as a piece of cloth or as a space suit in order to be here. This now was the paradox of Buddha: this dualistic world does not exist and yet it exists.

JJ: Again the correspondence does not fit. When we awaken from a dream we often recall the dream. We can recall the experience within the dream as a real experience.

In the Paradox of the Buddha when we awaken we have no memory because even the dream did not exist.

Reader: Secondly: You are in error that you ASSUME that once one would have reached nirvana, he would have forgotten all of this world.

JJ: That’s not my error for I assume no such thing. I was merely repeating what you appear to teach. You seemed to be saying that after we achieve liberation that this world will be as if it never existed. After all, that is what those who use the Paradox of the Buddha teach.

Reader: This is NOT true. DK’s Call which you quoted above illustrates this perfectly. All masters who HAVE reached the other shore, perfectly recall their past worldy dream and see this dream of humanity evolving. That’s why they could offer the Call to humanity in wording or by telepathy to human beings in this world. That’s why they are able to help working from the Cosmos or in the Hierarchy.

JJ: Then maybe we agree after all. If you agree with me then what is this augment about?

Reader quoting JJ How loving of you to make such a judgement with no evidence.

Reader: Evidence? In all discussions so far there was but one thing clear to all of us, when I touched on the subject of gun control; all Americans here were stumbling over me in order to defend their rights. Talking about attachments….

JJ: But you began the discussion by revealing your powerful attachment to controlling the rights of others to own guns. Because of this strong attachment of yours you are like the pot calling the kettle black.

Reader: The saying goes: “It takes one to know one.” But if one does not know yet the principle of Transfiguration (which comprises several aspects and Mysteries) and the principle of HOW our ego flaws can be transmuted and purified – and these two Principles are the main principles working on the Path to Home – then it is clear that one has not walked this path yet. And so neither can one judge if someone else would have walked it or not for he cannot discern.

JJ: Why are you being so judgmental and assuming that we do not know this? Why do you assume the worst in your fellow humans?

Could you please explain what the Principle of Transfiguration is as you see it?

Reader: I will only offer the description of the main principle, but I cannot go into the details or revealing the Mysteries in public. It would desecrate that which is divine and from God’s hands. It was and still is a secret that can hardly be found anywhere in written form. DK also hinted at that and said that in future it will be revealed plainly and clearly. But it is not yet time.

When people would like to know more and in particular to experience this as a logic step towards Liberation of the spirit soul, then they can contact our group or me privately.

JJ: This is the same tactic used by the last group that came here with a similar philosophy.

You claim secret knowledge but cannot tell us about it nor give us any wisdom that indicates you even have a carrot to dangle in front of us.

From your description though it sounds like you claim the key to immortality or at least life extension. Is anyone in your group over a hundred years old or does anyone give any evidence that they use the principle of transfiguration any more than members of this group?

I give you the benefit of the doubt that you mean well here and you are welcome to stay as long as you like, if you abide by the rules, but some grow weary of covering this topic so many times. It would be interesting to see what you have to say about something other than the topic of duality. From past experience, those with your philosophy cannot seem to talk about anything else.

Because of this I try to limit my response to various items that you bring up. You’ll have to forgive me if I do not give extensive replies to you in the future, but this is about as far as the discussion usually gets before everything becomes repetitive.

Reader: There is one vital thing required for the Path that leads to the Treasure: that is obtaining a True Balance between head and heart. The mind must learn to serve the heart, which is contrary to the current situation in this world where the mind is dominating and is constantly reasoning out things preferably by this lower world’s logic and understanding at the cost of the heart. But evidently this attitude does not work when we are touching upon things supernatural.

JJ: Where in the world do you get the idea the mind is dominating? DK tells us that only about 10% of the populace are capable of using mind and from my experience I have difficulty in believing it is that many.

Perhaps you are referring to brain activity rather than mind. This would explain why you think the mind is dominating in the human race.

The heart is composed of two major aspects, love and wisdom. Love is the higher spiritual feelings and wisdom is the radiance of mind expressed as pure reason. Thus mind is not separate from the heart but has its beginnings of manifestation in the heart. The heart center also has a reflection in the head where even higher light and love is revealed.

Reader: I am amazed. On the one hand you promote ultimate freedom, yet you censor my posts and even block one.

JJ: I do not have power to censor posts, only to accept and reject them.

I did reject one the other day because it contained wild-eyed conspiracy theories that was way off topic and would have distracted the class.

The biggest complaint I receive from students is that I allow people like yourself to distract us too much and interfere with their freedom to learn as they have chosen.

The Principle of Freedom looks at the maximum freedom for the whole, not at just one individual who wants to violate group will.

Reader: On the one hand you promote receiving new principles which might help the group find and expand our understanding of the Truth and hence our consciousness, yet when something new is coming up and even a second Principle of HOW it would be possible to let our ego go, then this is negated, ridiculed and even outrightly denied.

JJ: What new principle is this? You have not explained any principle that I know of, let alone a new one. I cannot reject a thing if it does not exist.

Reader: It seems to me that your ego has problems in accepting that there might be something new that you actually didn’t know yet.

JJ: Like I say, I have to be presented with something new before I can reject it.

Reader: When I touch upon the principle of Transfiguration, which is the one and most vital Principle on our way Home, which is to become truly Spiritual, or in a popular terminology “to become enlightened”, then all I get is your comment “It would be interesting to see what you have to say about something other than the topic of duality.” Sigh…. Transfiguration IS the effect of leaving duality, JJ.

JJ: You didn’t touch on the principle of Transfiguration. You said nothing about how it works. You said it was a secret.

Reader: Obviously you did not understand at all what I had to say about Transfiguration.

JJ: Maybe I missed something, but I do not recall you saying anything about it other than it being a secret.

Reader (Referring to a Gathering post): Good piece, JJ. We must become pure in heart AND pure in mind, meaning empty, transparent, like a child. But it still did not say HOW to let go the ego.

JJ: Thanks for the compliment. I did cover quite a bit of material on this in the previous gathering posts over the past couple months if you want to check the archives.

Another reader writes: When one starts to strangle their Ego, do other Egos come to the rescue of that ego being strangled? Meaning, if someone was killing off their ego and other people, friends, family etc started to notice the disintegration of this person’s ego, would they try and stop that person from killing off his ego by feeding him/her with ego laced compliments etc etc, to keep that ego fed and alive still and keep you focussed on the ego still? When one has killed off their own Ego, it must seem a lonely journey when the World is full of Egos 😉

JJ: Whenever someone attempts to make a step forward, in any way, a vacuum is created that creates a force that attempts to pull him back to where he was before or worse.

A simple example of this is the person who is trying to quit smoking. It will seem that people will come out of the woodwork to offer him cigarettes.

Anyone who’s ever significantly changed the course of humanity has either been a Crackpot, a Heretic, or a Dissident. In the case of Albert Einstein, he was all three!

The same applies to controlling the ego. When a person makes a step toward in dominating the ego it creates a great force to pull him backwards. The pilgrim must use the force of will to move forward despite the pull.