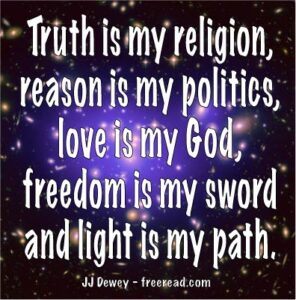 The Criteria of Freedom

It is interesting that when I have written about the Principle of Freedom that readers are almost in universal harmony with me. They seem to think “Yea, Freedom – that’s for me! I certainly support freedom over no freedom.”

But then when we talk about this principle, as it applies in reality, an entirely different reaction comes forward in many.

Here are some of my previous comments on the Principle of Freedom:

The only freedoms that should be restricted are actions that take away more freedom or rights of the group or individuals than is added.

We restrict the freedom of the thief to rob others because this action takes away more freedom than it adds. Overall, we may define the principle of freedom as follows: “Those actions and laws lie within the principle of Freedom that bring greater freedom for and amplify the power of DECISION-making for the group and individual.

“The actions and laws that lie outside the Principle of Freedom are those that bring less freedom for and diminish the power of DECISION-making for the group and individual.

“To take away freedom so that good may come is illusion and the foundation of great evil.

“To allow freedom so that evil and harm is possible is the path of light for in the end the illusion of evil is dispelled and the power to BECOME is amplified.”

The decision between the two paths is not a decision between blissful love and demonic madness. If that were all it is then all would choose the path of light. Instead, many are deceived into a dangerous heading toward the dark path because they believe they are choosing love.

Now let us apply this to gun control.

Does the freedom to own guns “take away more freedom or rights of the group or individuals than is added?”

I would say the answer is no. There is no proven benefit or additional right given through forced gun control. Yet allowing the freedom to own guns provides this benefit:

It allows more choices for the individual thereby enhancing his power of decision.

Some of the choices are as follows:

(A) A choice as to self-defense. All are not enlightened enough to use the power of the mind or higher self to preserve themselves from harm.

(B) A choice as to recreation. Many gun owners choose recreational shooting as their main reason for owning a gun. For them it is a little like the freedom to play a video game but more closely linked to reality.

(C) A Choice to hunt. Some think hunting is wrong, but if one thinks this then he should be a strict vegetarian for killing in the hunt is much more in alignment with nature than the methods used on the kill floors.

(E) A choice to exercise a right granted in the U.S. Constitution. Many gun owners like the idea behind the Second Amendment, that a well-armed nation is protected from foreign aggression as well as government suppression.

Does gun control supply any benefit?

About the only one I can think of is the illusionary one of greater safety for the general populace. I say illusionary because the facts prove otherwise. For instance, in Washington DC, which has the most powerful gun control laws in the nation, the murder rate is over 40 times as high as in Idaho which probably has the most liberal gun laws.

For instance, it would be unfair to compare the rate of auto related deaths between North Korea and the United States. Their death rate is much lower because few own cars. But in the overall picture who wants to trade our situation with theirs just because of the lower death rate from accidents?

England also is much different than the U.S. because few are able to hunt, for the lands available containing game are few and far between and controlled by the rich. They also do not have a history of a large percentage of the population possessing guns as do we. The people there just do not have a feel of what it would be like to live in a country where most of your neighbors own guns. Consequently, they conjure up unrealistic images in their minds of out-of-control violence.

I would imagine that this situation applies to most of Europe.

Many in the UK and Europe seem to think that if gun ownership were liberalized that people would go crazy and start shooting up the neighborhoods something like a gang war portrayed by Hollywood. If tomorrow the English and Europe were told that they can now own guns without restrictions I doubt if many would rush out to buy them. Because the consciousness of the people is so set very little would change, except maybe in the urban areas where some see the need for greater protection. I would suspect that crime would go down in those areas where stable people have the trust of the state.

The basic direction of law which is in harmony with the principle of freedom is to only restrict those who do harm by inflicting a sure punishment after the fact, not before the fact. Gun control punishes innocent people who have done no harm. On the other hand, if law punishes those who commit harm with a gun this serves as a greater preventive measure than does banishing gum ownership from those who are harmless.

Some say that if there were no guns at all in the hands of thee citizens then gun violence would not exist. If this happened then only the State could commit gun violence and this does happen. We have examples of millions killed by the state in these situations.

And consider this. The only way to do away with guns completely for all (but the state authorities) is to have complete power invested in the hands of the State. This presents a great possibility for tyranny.

To see the middle way on gun control requires vision from the plane of the mind or higher. It cannot be seen correctly from the emotional plane. Many on both sides of the issue are emotionally polarized and obtain their views from feeling only with little logic involved.

The important point to realize on this and other freedom issues is not whether guns are good or bad, but whether freedom is good or bad. Freedom should only be restricted when it is obvious to the vast majority that it needs to be done to pave the way for greater freedom.

For instance, the freedom of the burglar needs restricted so the majority can have the greater freedom to enjoy their possessions. But even here we do not punish the burglar before he commits the crime.

Everything that is really great and inspiring is created by the individual who can labor in freedom. Albert Einstein