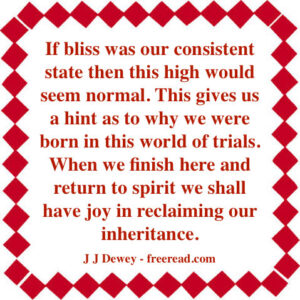 Spirit and matter, heaven and earth have joined in the disciple and as a being one with the soul lifts his hand as a symbol of commitment to the direction of Spirit as he sees it.

He commits himself to the idea “that there should be time no longer.” This sounds strange until we realize it is a mistranslation. It should read that he makes a commitment that “time should no longer be delayed.” Instead of stating that there will be no more time it is merely saying that the disciple is resolved to have no more delay.

No more delay about what? Next we read:

“But in the days of the voice of the seventh angel, when he shall begin to sound, the mystery of God should be finished, as he hath declared to his servants the prophets.” Verse 7

The seventh seal (chakra) is opened but now the disciple is having an awakening to the power and revelation from that center revealing the will of God. The disciple commits to following that will without delay and this will finish his quest for the mystery of God. He is now on the path toward oneness with God and such oneness is the greatest mystery declared by the prophets.

Next we read: “And the voice which I heard from heaven spake unto me again, and said, Go and take the little book which is open in the hand of the angel which standeth upon the sea and upon the earth. And I went unto the angel, and said unto him, Give me the little book. And he said unto me, Take it, and eat it up; and it shall make thy belly bitter, but it shall be in thy mouth sweet as honey. And I took the little book out of the angel’s hand, and ate it up; and it was in my mouth sweet as honey: and as soon as I had eaten it, my belly was bitter.” Rev 10:8-10

In a state of oneness with God and Spirit the inner voice speaks to him and tells him to take the book. In other words, he is to accept the revelation of oneness to which he is awakened and accept the mission that he has with the sons and daughters of men. Without the usual delay he now accepts the voice immediately. The revelation and mission is sweet “in his mouth.”

He finds it sweet to teach and talk about his revelations and plans but in his “belly” it was bitter.

When the disciple fully digests all that he must endure to accomplish the portion of the will of God he sees he discovers he must go through many trials, tribulations and endurance. He finds that shall not be so sweet as talking about lofty philosophy but will be a bitter pill to swallow, as was the crucifixion with Jesus.

At the beginning the disciple cheerfully says “here I am Lord,” and at the consummation he is likely to say, “If it be possible remove this cup.”

After the realization of the bitter pill to be endured he is told:

“Thou must prophesy again before many peoples, and nations, and tongues, and kings.” Verse 11

The disciple learns that not only will the bitter cup not be removed, but his work and trials are far from over. This mission he perceives is just the beginning of his work on a higher level than before. He will yet teach “many peoples, and nations, and tongues, and kings.” The bitter pill is a reminder that none of his future labors will be easy. His mission is the beginning of a struggle toward success that would frighten most seekers, but he must take courage, take the book out of the angel’s hand and move onward. In the end the reward and the joy will far outweigh any distress he endures. He senses this and moves onward no matter how great the risk.

Next we read: “And there was given me a reed like unto a rod: and the angel stood, saying, Rise, and measure the temple of God, and the altar, and them that worship therein. But the court which is without the temple leave out, and measure it not; for it is given unto the Gentiles: and the holy city shall they tread under foot forty and two months.” Rev 11:1-2

John was given a reed like a rod for measuring. This reed was probably like a stalk of grass that grew in the area something like a piece of bamboo. The rod was probably about six cubits or nine feet in length.

Next he was told to “rise.” This word comes from the Greek EGEIRO which is often translated as “arise” but can also mean to “awaken.”

John had just taken the book out of the angel’s hand so he had already arisen. There is no indication that he was reclined in any way. This tells us that the alternative meaning of awakening must apply here and would read:

“Awaken, and measure the temple of God, and the altar, and them that worship therein.”

Again, this tells us that the word “measure” may imply something other than the obvious. This word comes from the Greek METREO, which can mean “measure” in the normal sense but can also imply a judgement or to estimate a thing or matter.

A hint is given in its use in the following scripture:

“Judge not, that ye be not judged. For with what judgment ye judge, ye shall be judged: and with what measure ye mete (METREO), it shall be measured to you again.” Matt 7:1-2.

What is the disciple to judge? Three things: (1) The temple of God, (2) the altar and (3) those who worship therein.

But there is something he is not to judge. The next verse reads: “But the court which is without the temple leave out, and measure it not; for it is given unto the Gentiles: and the holy city shall they tread under foot forty and two months.” Verse 2

What does this all mean?

The disciple has just taken the little book and has finally comprehended his mission to be of service to mankind. Where shall he put his attention? He is to put his attention on, and understand in a way that gives him power to judge, the appropriate action to take in relation to the “temple of God.”

The temple of God is where God resides. And where is that?

Within ourselves. Those who seek God are temples of God and collectively form a great edifice.

Secondly, he is to judge the altar. And what is that? The altar is where the seekers go to communicate with God.

The true altar is the human heart. The disciple on the path of Christ is this to judge or assess the hearts of those he is to teach and to assist.

Thirdly he is to judge those “who worship therein,” or those who seek with pure hearts and good intentions to find the true spiritual path.

It is then interesting that there is another group he is not supposed to judge. These are the “gentiles” in the court outside the temple. These are they who do not seek God within, but seek a god without to rule over them. They are the masses who have not found the altar of the human heart as the only authority they need to find God.

He is told to not concern himself with them. They are not ready to find God where he truly is. He is supposed to put attention on those who are willing and able to sense the spirit of God within themselves. It is with these that he applies the principle behind the name of Jesus Christ, which means “anointed to deliver.” He thus seeks to teach and assist to deliver the pure in heart from the false Gods in the outer court.

The last part of verse two reads: “and the holy city shall they tread under foot forty and two months.”

Those who worship a God without will tread underfoot the holy city. What is that? The holy city is the gathering of lights or of those who find God within. Those who see a prophet, priest, king or book as the mouthpiece of god without will seek to destroy and disperse any gathering of those who find God within. They will seek to discourage them from finding God within and attempt to persuade them to worship god without. This power they have to diffuse the power of the lights will not last forever, but for “forty and two months.” This time period appears repeatedly and we shall examine it shortly.

An expert is a person who avoids small error as he sweeps on to the grand fallacy. Benjamin Stolberg