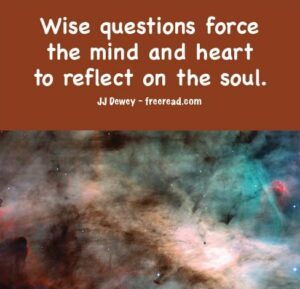 JJ: You do not need a revelation that you are a part of a special group to sing it. The 144,000 is symbolic of a conscious state that relies on soul contact and is free from the control of the beast. If a person feels in harmony with the song and feels right in saying it, adding thought to its words, it is a sign he is heading toward this consciousness.

Question: What is decision? Where does it come from. And how can I even prove it exists?

JJ: Decision is an impulse emanating from our life principle. You know it exists because it comes from your life essence. You think and decide therefore you are and are becoming what you decide to become.

Reader Comment: I have had a discussion with someone on another forum. They believe everything is cause and effect and that decision is an illusion.

JJ: Is experience illusion even if you are having it within a dream? No. It is real and you take it with you whether it emanates from a dream or what some consider true reality.

Reader: I don’t understand the quality. Or how it can exist. Since cause and effect, action/reaction does make sense. It seems to leave no room for the quality of ‘free will’…..as it does not seem to exist in the way that it does not conform to the laws of physics in regards to action and reaction where there is a chain of events. cause and effect, which seem to control events. rather then a decision, it seems its just the variables that control it all and decision does not even exist? Any help on this?

JJ: Sure. Look at your computer in front of you. Did random cause and effect create it or did a decision-maker do it?

Take a look at a cell in your body and ask the same question.

Any intelligent design is evidence that a decision-maker exists somewhere.

Reader: To finish off here, one may say that if the universe could go back in time and a big bang happened again exactly the way it did before that everything would play out exactly the same and the same variables would control the outcome?

JJ: No two big bangs in the universe are the same just as no two galaxies or solar systems are. What seems like an explosion in space is really an explosion of time. Billions of years are passing in one second for the tiny decision-makers laying the foundation for a new and improved universe.

Reader: Where exactly does decision fit into it all. Can you prove it exists?

JJ: If you can prove you exist then you have proof decision exists.

Reader: What are thoughts and from where do they originate?

JJ: Thought originates from the power that gives us decision. Without decision there would be no life, creation or thought. Decision stimulates thought and thought amplifies intelligent decision.

Another reader asks that if Christ or an avatar were to be born among us as a babe would he know who he was?

JJ: All beings high and low, who are born as infants, start with a blank slate with a few exceptions of flashbacks.

Most likely he wouldn’t know who he was or the details of his mission until around the age of 21 or possibly longer.

Question: Would a master be going through mini-initiations once more and have to face the Dweller again?

JJ: He would go through the initiations all over again. They would still be difficult, but easier than the first time they were taken. Yes, he would face a dweller again, but have additional power to overcome him.

Question: Would such a being be born through a Disciple or Initiate (if that is what they chose to do), who was learning or knew more of the Truth and Knowledge, rather than an ordinary woman who wasn’t into the spiritual realm of knowledge and Truth?

JJ: This would depend on the nature of his mission. If it is important that he relate to the common man it is possible that his parents would appear to be ordinary people. If it is important to demonstrate the ideal man or woman then he will have an outstanding parent as Jesus did in Nazareth.

When I read chapter 20 of Eternal Words, I couldn’t help but ask myself a question about the largest of the large, the precise point where JJ communicates with the universe when he can go no further. He feels a tremendous fear and loneliness stemming from the universe for ‘it’ has been alone and does not know if any one of ‘her’ kind exists or not. Looking back to us humans, when we meditate and send energy to a place or a person, or to the universe, does the universe sense our light and energy, or love for that matter? Is there any way to exchange and give to her, as lonely as she may seem? It surprised and puzzled me to see her in that state, yet she contains so much…

JJ: Just as you start life in a vulnerable state knowing little of what it is all about so does the entity who occupies our universe. As this entity, or any other, matures it senses the life force within itself, which emanates from the tiny cells within its body. Later it develops soul contact and receives from his higher self.

For the Universe this higher self would be the Masters and other higher lives that are now appear to be the highest intelligence in the universe, but not forever. The day will come that the universe will mature and it will be more intelligent than all of us put together. Then we will blend our consciousness with it and all life will be as one.

Keep in mind that we are talking about limited consciousness as it manifests on the physical plane. The Higher Self of the universe is linked to the One Great Life we see as the universal God.