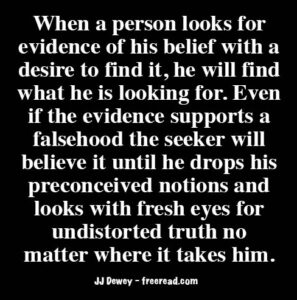 Shortly after the Tsunami in Indonesia (in 2005) I jokingly wrote the following about Bush:

“Too much attention has been placed on the problems in Iraq lately and Bush needed a diversion. He thought he would kill a few Islamic terrorists in Indonesia at the same time as creating diversion so he dropped a 100-megaton atomic bomb in the Indian Ocean on a fault line. This created largest earthquake in recent memory causing the giant Tsunami, which killed over 150,000 Muslims and left millions homeless. This sent an underground message to the terrorists to not mess with Texas.”

It is entirely predictable that conspiracy theories will surface around any major catastrophe or big event in world history. The larger question may be why this is so? While it is true that there have been active conspiracies behind the scenes of world history it is completely illogical to assume that every major event and every catastrophe is caused by invisible sabotagers working behind the scenes.

Sometimes bad things just happen and sometimes big events materialize for exactly the reason that is seen on the surface. Look at your own individual life for instance. The last time you had an auto accident do you think some conspirator tampered with the brakes or was it just a bad combination of events? In almost every case the bad stuff that happens to us is caused by the obvious.

Even so it is with the world. Once in a while a conspiracy may pull something off, but most of the time a natural course of events is to blame.

The Tsunami was caused by a major earthquake that just happens to occur with regularity in our history.

We went to the moon because we built a Saturn rocket and blasted off not because conspirators built a Hollywood set and fooled us.

Why is it so hard to believe that 911 was caused by terrorists especially in the face of the fact that Osama Bin Laden admitted that he was the mastermind?

Then with the terrorist act in London (See Wikipedia “7 July 2005 London bombings”) it was only days before conspiracy theories started to fly. G8 leaders (including Bush), bankers and others must have been involved.

Let’s take a look at this one. They have a tremendous amount of photographic and other hard evidence of who was involved. They have in custody a number of the perpetrators and they are talking. In the face of all this just imagine how lucky conspirators would have had to have been to pull this off.

They would have had to execute the plan so flawlessly that the press wouldn’t have been able to pick up a trail. The press throughout the world hates Bush and if they could pin anything like this on him or other G8 leaders they would.

Thousands of police are investigating. Somehow the conspirators would have had to cover all their tracks so perfectly that none could follow leads to them.

They may say that those who executed the attack were lower-level dupes, but so many were involved that it would only be a matter of time before someone would talk and expose the conspiracy.

Now let us get back to the question as to why conspiracy is seen in so many places?

The answer is you find what you are looking for and if you suspect a conspiracy and look for it you will find evidence.

For instance, let us suppose that you suspect your spouse is having an affair and he or she is completely innocent. Even though he is innocent will you still find what you are looking for? Yes, in almost every case where unreasonable suspicions arise, evidence will be found to confirm them.

So why do conspiracy people look for insidious motive under every rock?

There are several reasons why conspiracies are looked for. Here are a few:

(2) The theorist is often anti authority and looks for sinister motives within the powers that be. Indeed, the corruption within the ranks of established authorities adds fuel to this fire.

(3) The theorist is often an intellectual with good powers of observation and loves the game of using his mind to see cause beyond the obvious cause. It’s a little like seeing the face of Jesus in an ink blot. It’s kind of a fun intellectual exercise.

(4) The theorist often has a theological belief system that needs a conspiracy involved to make all the pieces fit.

(5) There is a particular person in power (like Bush or Clinton) that the theorists just hates and is happy to blame for the world’s problems.

(6) The theorist is often having a tough life and instead of taking responsibility for it he blames it on the bankers, politicians or whoever working behind the scenes to desecrate his life.

The one area where some proven conspiracy has been involved in history is assassination. Because this can be pulled off by the outward work of one person or even accomplished subtly through poisoning and other means this has been the work of conspiracy throughout history. Because an assassination can be pulled off in seconds the cover-up is much easier than an earth-shaking event such as 911.

Why did I decide to post on this subject again?

Because the main thrust of this forum is the search for truth. How can we be expected to find the truth in spiritual matters if we cannot see the obvious in the events happening in the world around us? To see reality as it is, is always a good exercise of the spiritual mind in sharpening the discernment of truth.