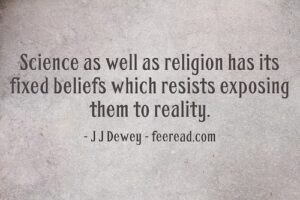 Dialog on the Atom

Reader: I don’t know how plainer I could have made it when I criticized JJ’s narration of the quantum experience as using an out of date scientific model where atoms were compared to “beach balls” (beach ball is JJ’s phrase)… that quantum theory rejects these early 1900’s ideas as naive.

JJ: Quantum theory says that subatomic particles and electrons exhibit the properties of both a wave and a particle. Some scientists say this is an illusion, but assuming it is correct when an atom or electron exhibits the property of a particle it would indeed have a shape. When photons or electrons are observed in the double slit experiment they make an impact as if they were small round balls.

Would actual photographs of individual atoms that look like small beach balls do the trick???

Go to this LINK:

Reader: Sheesh. A retired real estate monkey lecturing a Ph.D. in chemistry with all the confidence of a fool.

That has to be good comedy. (c;

Hey Einstein, take another look at the site and pay attention to the dancing atom in the upper right corner.

“Dancing” is a key word you are missing in your dissertations on the quantum world. There are a couple of other fundamental ideas of quantum mechanics you miss too, but perhaps we can cover that another day. You might take a look at “The Holographic Universe” by Talbott… it covers in layman terms some of these other things.

JJ: The dancing atom has nothing to do with quantum physics but proves my previous point that even stable atoms like gold have slight polarity. It is obviously a slight imbalance in charge that is causing the atom to move back and forth. (Link no longer available)

To say this is some type of quantum movement is illogical. If it were, the movement would be a much greater distance and many atoms (instead of a single one) would be disappearing into waves and reappearing. Only one atom out of hundreds is even moving.

Your point to me was I was wrong in stating that if one were to descend into the atomic world that one would see the atoms as objects. Yet here we have an actual photograph of atoms that are like many beach balls grouped together. How you can deny the shape of what can be photographed is a mystery, especially from one who claims superior learning.

How much more obvious can it be that if you were small enough that you would see the same beach ball like objects as in the actual photograph? After all, quantum theory tells is that even subatomic particles are solid when they are observed.

I’m sure you will soon bow out of this argument soon to minimize being embarrassed by a monkey.

Reader: I will repeat myself here again at the science 0.00101 level…. “It is generally accepted by quantum scientists that the Quantum world DOES NOT follow the laws of the marcro non-quantum world.” Please read that sentence until it is understood. Please notice the words “DOES NOT”.

JJ: This is completely understood by me and does not refute anything I have said.

Reader: So, JJ says, “looky, looky, here some photo’s!” Sheesh. Does JJ know how those are imaged? Do these guys even claim that these have quantum relevance… are quantum representations? So, now I am supposed to explain how quantum scientists even view such photo’s? They would laugh at JJ’s points as complete crap…. missing the point… wide of the mark. Why? Two words: QUANTUM UNIVERSE.

I gotta go. But, when I get a chance, I will type out a few comments on the difference between disinformation and misinformation. Maybe that will help. JJ’s nonsense is misinformation run amok… he’s way in over his head in regard to his nonsensical over-simplified scientific claims … if it was that easy, we scientists could complete our training in a week.

It doesn’t matter whether there is a quantum or holographic universe, form is form. If you look at a picture of a beach ball then it has the shape of a beach ball whether it is a hologram or not, or if quantum is at play or not. In fact, all form in the universe is the result of formless quantum energies uniting to create form. You could even say that your body operates on quantum principles but that doesn’t mean I cannot see it.

We have an actual imaged photo of atoms that look like little beach balls and you have failed to explain why I am wrong in saying they look like beach balls. Sigh.

Your response is to say I do not understand how an electron microscope works. I understand it as well as I understand how a digital photo or a film photo works. You only need to know one thing. The form you photograph is the form that exists in this reality.

If I were you I would be embarrassed to cut and run without explaining why you disagree with me or why I am wrong.

The reader then quit the group. I thought this was sad because he had been a member for years and often caused controversial, but interesting dialog. Even so I couldn’t let him get away with an unjust attack because he is a PhD.

Another reader asks some questions: As we have a handwriting specialist in this group, I was wondering if I could pose a couple of questions.

My six-year-old daughter loves going to school, except for one thing. At the moment, they are teaching her class how to do joined up writing of which she simply hates.

JJ: This is good. This shows she has an independent spirit at an early age. Look at how you were taught to write and see how different your writing is now and this will indicate how much your independence has taken you away from what you were taught is the correct ways. Cursive is the normal writing taught in schools because it is deemed nice looking and faster to write than printing – at least for a child.

It would be awkward to teach more than one system of handwriting in today’s schools, but once a system has been learned the student should not be discouraged from developing his own style.

Yes, a person can change his personality by changing his handwriting, but neither joined letters or printing is seen as good or bad.

One who joins his letters is more of a team player and one who separates them like to do his own thing and be his own boss.

Fortunately for people like me we now type most of our words so our words are easy to read. Good English is the difficult part now.