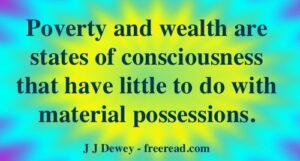 The Forces of Materialism

Question: Some seem to think that Osama bin Laden and the terrorists are fighting the forces of materialism. Is it possible they are mare spiritual than those in the democratic countries?

JJ: To see good in Osama bin Laden because he is fighting the forces of materialism is illusion.

Why is it illusion?

Ask this question. Are the terrorists really fighting materialism or are they really aiding materialism? Is it actually materialism that bothers them or is it change brought about by true progress, not related to the materialism of the west?

There are two primary things that bother them.

(1) The first in this group is democracy and an increase in rights and freedom of the people, especially women.

(2) The second thing that bothers them is anything that represents progress from the West that will alter their way of life, especially as it relates to the authoritative control over the people.

But isn’t it obvious that the West, particularly the United States, is much more materialistic than the terrorists who seem to want to live in the lifestyle of the Amish?

No, it isn’t obvious. If a people have money, abundance and scientific advancement this does not mean they are materialistic. DK himself gives out a meditation to disciples to assist them in drawing money in their direction. Is this materialistic? No.

DK happily points out that nuclear energy has power to give us cheap energy which can advance civilization and give us more free time from the drudgery of earning a living. . Is this materialistic? No.

Materialism, as correctly taught by DK are forces which pull the people toward matter and the material side of life where the personality and beastly authority assumes control rather than Spirit.

Let us look at two sides in the greatest of all conflicts, World War II.

DK specifically defined Hitler and the Axis powers as representing the “forces of materialism” and the United States, Britain and the Allies as representing the forces of light. Of course, within these two groups there were pockets of both forces, but overall he identified the polarization with definiteness.

Now why did Hitler and the Axis powers represent materialism?

Was it because they were more centered on the wealth and everyone in the country was seeking to get rich?

No. Both sides were doing all in their power to get ahead and gain prosperity.

Was it because Germany was cozy with big business?

No. Both sides catered to big business.

Was it because Hitler, as the leader, was coarse, self indulgent and did not direct the people to a spiritual path?

No. Hitler was very self controlled, was a vegetarian, did not smoke or drink, encouraged marital fidelity, Christian morality (in many ways) and was consistently teaching the Germans about what he saw were high ideals. Hitler did not like cussing in his presence.

FDR and Churchill, the leaders of the forces of light, ate lots of meat, smoked and drank a lot more than average, and rarely preached about morality. Some thought they were amoral. Churchill was also overweight and some thought him overindulgent in his appetites. Both men cussed at times and were tolerant of bad language and off-color jokes.

Why then did Hitler’s Germany represent the forces of materialism?

(1) Just like the terrorists, he wanted to return to the glories of the past empires and tyrants rather than move into the future of change. And increased freedom.

(2) Just like the terrorists, he did not respect the freedom of the individual but believed the masses need a strong dictator to set them on the right path.

(3) Just like the terrorists, he saw spirituality as a well-defined black and white morality that needed to be imposed upon the people through law of brainwashing.

(4) Just like the terrorists, he believed that cruelty and torture should be used to gain advantage. He taught his underlings to block out any sympathy of feelings or empathy for any person that they must hurt. People were to looked upon as no more (perhaps less) than material objects to be used or eliminated.

(5) Just like the terrorists, he sought to take other people’s property and lands by force.

To hear the statement “forces of materialism” and equate them with how the preacher in church defines it is a big mistake. Remember, the truth is often completely upside down to the mass thoughtform.

Except from DK on the Forces of Materialism.

In past communications I have oft spoken of the Forces of Light and the Forces of Materialism, meaning by these terms the controlling trends towards brotherhood, right human relations and selfless purpose, and those which reverse these higher tendencies and bring into human affairs selfish acquisitiveness, emphasis upon material interests, brutal aggression and cruelty. The two positions are clear to the unprejudiced onlooker.

To these two groups I would add a third. This third group is taking shape in the world today with extreme definiteness and is composed of those who throw the weight of their influence and of their action on neither side; theoretically, they may advocate the higher way, but practically they do nothing to further its interests.

This third group is formed internally of two groups: first (The pacifists of today-JJ), those people who are potentially weak and are therefore ridden by fear and terror, feeling that they dare not move in any way against the forces of aggression, and secondly (nations that do not want to get involved-JJ), an intrinsically powerful group who, through selfish material interests, plus a sense of separative superiority, or distance from the seat of trouble and the domination of false values, hold aloof from the situation and shirk their evident responsibility as members of the human family. This latter group includes, among others, a number of powerful democracies and republics. Fear, terror and a sense of helpless futility govern the reactions of the one, and who can criticise? Selfishness and separativeness control the other group.

You have, therefore, in the world at this time three groups of people who embody the three major views of the whole of humanity, plus the unthinking masses, swayed by propaganda, controlled by their governments, and the prey of the loudest voices. It is of value to you to get this picture clearly in your minds, and I would like again to define them.

The problem is one of exceeding difficulty because, even though the lines of demarcation are becoming steadily more distinct, yet the exponents of these three groups are to be found in every land and among all people-in every church and in every home. Externalization of the Hierarchy; Pages 214-215