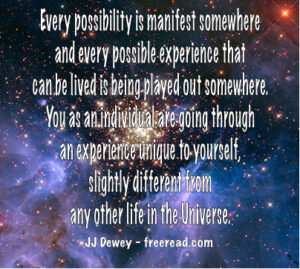 Questions on God, the Universe and Serpents

Reader Question: Does it strike you all as true that God is limited to what we human

beings manifest? Help me out here to understand.

JJ: You have to take this into consideration. Many have passed through the human kingdom that are now much more than human and are reflecting the higher attributes of God. These are “the Gods” in the language of some.

The one God is limited in this world by the actions and intelligence of its reflections, but remember that the Planetary and Solar Logoi are also reflections who have advanced further than we. These are much more unlimited than are we.

However, in our everyday lives we are dependent on reflections more closely aligned with our own development.

JJ: The universe of six begins within the atom itself. The Universe of Seven extends from the seven potential electron shells to our universe of galaxies.

Reader: Does the universe of 6 end with atoms?

JJ: Yes. There are six different quarks in the Standard Model of Physics, three are in a proton and three in a neutron.  The mass of the proton is much higher than the three quarks and some think there are an additional three anti quarks undiscovered which would make the six appear again.

Reader: Will the atomic universe become a universe of 7 someday?

JJ: No, but the sparks of life there will share consciousness with life in our universe of seven, just as we will share when the greater universe is formed an eternity from now.

Reader: It seemed like Joseph communed with lots of different entities, but I did not see any key underlining or revealing any new understanding about communion.

What is the third key of communion?

JJ: The tour (referring to Book 4 of the Immortal) was not to find the key of communion, but to put it into practice. The third key was given earlier in the book which is basically this:

What we call regular communication is subject to the Principle of Corruption, similar to what happens in the game of Chinese Whispers. This corruption can only be overcome through the seeing of principles through the eyes of the soul. Embodied principles are eternal words. Eternal words, or words that do not pass away, are the key to communion and is also the name of the book.

Reader: What is “foundation DNA”?

JJ: A rat’s foundation DNA is that foundation program which constructs the rat’s body. Foundation human DNA lays the foundation for the basic human shape and function.

Reader: Why does it limit their vibration and prevent higher contact as with the reptiles?

JJ: Imagine that you were in the body of a lion. Suddenly you would find blood stimulating to the taste whereas in a human body it is repulsive.

Now imagine being constrained to a tree. You wouldn’t even have the faculties to become self-conscious. You would suffer many limitations compared to human form.

Even so, the energy of the serpent race is much more centered on the physical sensation than the soul, even more than lower humans.

Humanity has presently evolved to the fifth root race. The coming sixth and seventh will allow us to be more sensitive to higher contact.

Reader: Through their survival of the fittest society does the serpent race perfect dna and physical form so humans can then perfect consciousness?

JJ: The serpent races perfect physical sensation and make progress in perfecting form. But it is the humans that perfect living form. Consciousness advances in human form but continues to progress in realms beyond human.

Reader: Is this done when a planet is based on the third ray of active intelligence?

JJ: This certainly helps in the perfection of form, but I’m not sure it is always the case. However, the third ray would always have an influence.

Reader: Are the serpent races that existed in the history of our planet left over from when our planet’s previous incarnation on the ray of active intelligence?

JJ: Actually the earth is presently on the third ray and this is conducive to the development of beautiful physical form. You are probably thinking of the previous solar system, which was on the third ray; whereas the present one is on the second ray. Not a lot is given out on the previous soar system except that the foundation for all physical form was laid there including human and serpent.

Reader: Are the logos’ of Draco and Hydra based on active intelligence?

JJ I believe that Draco is third and Hydra is sixth.

Reader: In the chapter it is said there are no shape shifting serpents. But this quote (from the Emerald Tablets) seems to state otherwise.

JJ: The book talks about the present time, not Atlantis. There are no shape shifters among our leaders as some teach though some may project an illusion of various shapes.

Reader: If the serpents in Atlantis did not shape shift did they take permanent possession of the chiefs’ bodies? How?

Or did they kill the chiefs and by some lower magic or hypnotic power make themselves look like men? How?

JJ: The serpents reached the end of their evolution in Atlantis and there were just a few left. The few were very powerful and could appear as human by hypnotic control rather than shifting shape. They had power to draw life energy from average humans and use that energy to manipulate and control them, but the disciples saw through them and exposure caused the human race to dominate.

Reader: What other kinds of forms appear?

JJ: On some planets, birds, dinosaurs, fish, and other creatures evolve into human like form, but the serpents are very tough physically and usually dominate for a time. Then when humans appear they are nurtured because of their beauty. When they multiply and become a threat for domination, conflict ensues until only one upright race is left.

“And I will put enmity between thee (the serpent) and the woman, and between thy seed and her seed; it shall bruise thy head, and thou shalt bruise his heel.” Genesis 3:15