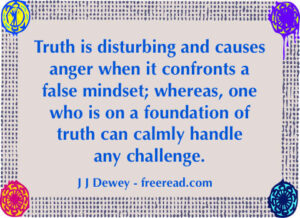 Is a Knowledge of Reincarnation Helpful?

The Question: How does a knowledge of reincarnation lead to right human relations and “the solution of all the problems of humanity?”

On the road to answering this question we have other questions:

So what does all this have to do with right human relations?

First, let us look at a most important principle that governs good relationships:

The giving and receiving of honest, truthful communications is perhaps the most important ingredient of right relationships.

The easiest way to destroy a relationship is to deceive those in the relationship. This can create a distrust that can never be completely recovered.

So, what does deception have to do with reincarnation?

A wrong belief about this and other doctrines involves a self-deception and if the self is deceived then the communication with other selves will be deceptive also.

It is true that the resulting deceptive communication will not be intentional, but it will be deceptive nonetheless, thus obscuring right human relationships.

Let us take a look at one of the greatest relationship problems on the earth today. In some hotspots of the world we have terrorists who are willing to blow themselves up and kill innocent men women and children in the process to please their God.

What kind of relationship do the family victims have toward those who espouse such a philosophy? You are correct. It is generally abject hatred.

Now let us look at the cause of this willingness and eagerness for a devotee to sacrifice his life and kill innocent people.

In almost every case the suicide bomber believes in only one life.

He also believes that it is God’s will he destroy the opposing religion or race.

He also believes in an eternal heaven will be given him as a reward for fulfilling the will of God.

Now let us suppose this person was converted to the truth of reincarnation. How would he then view the situation?

The understanding of the law of rebirth brings in the law of cause and effect and makes it real. When the truth is seen the devotee would think twice about blowing up 50 people in a mixed crowd for he would be the cause of much needless human suffering.

How would he pay for such a crime in a future life? He took away the lives of children with no sensitivity to the feelings of the parents. To learn how the parent feels he may have to be reborn, become a parent and then suffer several of his children to be unmercifully killed by some madman.

The bomber perhaps killed a beloved spouse or two. He may have to pay this off in a future life by losing a loved one or two himself.

Now, the payment for such mistakes is not black and white in kind, but if his bomb kills 50 people he will have accumulated a debt of fifty lives. He will usually either have to suffer 50 unnecessary premature deaths or save fifty lives. Generally what happens is he will suffer enough to learn true empathy and pay the rest off with service of some kind. But the sad thing is that one so wild-eyed to kill himself and others for God will often take many lives and much suffering before he learns to walk in his brothers shoes.

A prime cause of hatred and poor relationships is intolerance for differences. This is especially true with physical differences such as race and differing belief systems. Terrorists often hate other races and beliefs.

Does an understanding of reincarnation alter this view?

Indeed. An understanding of reincarnation brings a realization that we have lived many lives and most of us have lived in many differing races and many belief systems. How can you hate a different race if you realize you may have been a member of that race a lifetime or two back? In addition, a hatred of a race will cause you to be born into that race in the future to force you to learn to love and understand them.

How can you hate a Moslem, a Buddhist, a Hindu, or a Jew if you realize that you have been there and may yet be born into many different religions in the future?

How can you hate gays when you realize that, no matter how straight you are now, that you are cyclically born with an attraction to the same sex and have to learn to wisely channel this energy?

How can you hate a criminal when we realize we have all been criminals in past lives?

How can we hate simple or backward people when we know that we have been simple and backward in our earlier lives?

How can you continue to hate your spouse when you realize that hatred will force you to meet again and learn to dispel the hatred? If he or she is hard to live with it would be wise to dispense with hatred so you do not have to put up with the negative personality many times in future lives.

Why would we want to hurt or injure anyone when we realize this creates a debt that we must pay, usually through the path of pain?

Indeed, the knowledge of the truth about reincarnation and cause and effect leads the disciple to the path of harmlessness. When correct understanding comes he daily, and sometimes hourly, contemplates how he can live his life so as to not harm another living soul.

Thus, we see that a basic doctrine such as reincarnation, which on the surface seems to have little to do with relationships, turns out to have much to do with them.

“These ancient Mysteries were originally given to humanity by the Hierarchy and contain the entire clue to the evolutionary process, hidden in numbers, in ritual, in words and in symbology; these veil the secret of man’s origin and destiny, picturing to him, in rite and ritual, the long, long path which he must tread, back into the light. They provide also (when rightly interpreted and correctly represented) the teaching which humanity needs in order to pass from darkness to Light, from the unreal to the Real and from death to Immortality. Any true Mason who understands, even if only to a slight degree, the significance of the three degrees of the Blue Lodge, and the implications of that in which he participates, will recognise the above three phrases for what they are, and will recognise the significance of the three degrees. I mention it here with Masonic purpose because it is closely related to the restoration of the Mysteries and has held the clue (down the ages) to that long awaited restoration, to the platform upon which the required teaching can be based and the structure which can express (when freed of its Jewish names and nomenclature, which are long out of date, though right three thousand years ago) the history of man’s moving forward upon the Path of Return.” Reappearance of the Christ, Page 122

Here he makes an interesting statement that the nomenclature of the various mystery rites are outdated and need to be replaced by a new “platform” freed of old style religious dialog.

What do you suppose this new platform will be? What is needed today so that ceremonial magic will appeal to the masses?