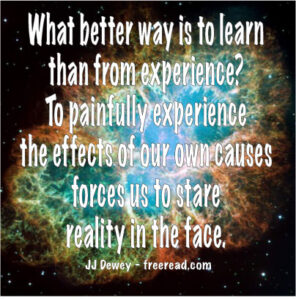 Conditions for the Reappearance

Question: Why do you suppose it is important that Christ wait until there is some stability and right relationship on earth rather than coming in a time of turmoil to fix our problems?

The traditional view is that there will appear a great antichrist that will make Hitler look like goody-two-shoes. This will followed by end-of-the-world cataclysmic events ending in Jesus showing up in the sky smiting the wicked with fire. Afterwards, they will burn as stubble and the remaining righteous will either enter heaven or live on the earth in a paradise with Christ.

The interesting thing about this scenario is that it is similar to the expectations of the people before the first coming of Christ.

Did the mainstream expectation prove to be right?

Instead of an end-of-the-world scenario Jesus was born as a babe in a manger and grew up as a regular mortal unnoticed by his brethren in Jerusalem.

Will the mainstream prediction be correct this time?

So what will happen this time?

DK tells us that instead of coming during a time of great destruction that he desires to come at a time that the nations of the world are in a relatively stable condition so he will be able to accomplish his work and teachings unimpeded.

The prophesy in Malachi tells us that if he does have to resort to coming during a time of destruction that it will be because of failure on the part of mankind.

Unfortunately, the religions of the world are anticipating a Second Coming that is the result of failure rather than success.

The masses of religious thinkers need to change their attitude and point their attention toward humanity establishing right human relations so we can have a Christ that will assist the willing among the race rather than being a salvage operation of some kind.

A lot of the misinterpretation occurs because believers read of the end of the world in the Bible which is actually a mistranslation. It should read “the end of the age.”

After the end of each astrological age of approximately 2160 years the world as it is known dies and a new age with new keynotes is established.

The old heaven (spiritual; teachings) and the old earth (customs and traditions) pass away and a new heaven (new revelation) and a new earth (new order of things) is established.

As it was in the past so shall it be again. The earth will not end, but the old ways will pass away giving space for the new.

DK tells us of Christ himself BECOMING through increasing intense experiences where nothing is permanent.

Look at these hints on how to increase our knowing and tell us what they mean to you. Especially contemplate the words “experiment, experience and expression.”

We received some good answers. Here are my comments:

To experiment is the first great step in becoming an initiate for one cannot be an initiate without experimentation. Why? Because, to initiate something new requires some trial and error, experimenting with different methods and approaches until that which is imagined becomes that which is manifest.

The average person merely waits until someone else gives them purpose or tells them what to do, but the initiate will experiment on his own initiative.

Concerning the Christ, DK wrote that he “passes on steadily to increasingly potent experiences, and that in His divine experience there is nothing static or permanent…” Reappearance  of the Christ, Page 24

People think that a great being such as the Christ is so perfect that he would have no need to experiment because he’s already got everything figured out, but, as usual, reality is much different from the common perception. The truth of the matter is that the more progressed is the individual the more he will experiment, not less.

The Higher Lives look forward to that which has never been and then experiment to make it a reality. As the Great Initiate moves forward in such experimentation, he undergoes more potent experiences than ever felt before and the capacity for joy increases. When the potency of experiences increases then the power to know increases.

After the initiator has an increasingly potent experience, he then develops a natural urge or need to express that experience. When the experience has been expressed and then seen by those who have not yet had the experience a fascination and sense of wonder develops within the heart of the seer. The witness then desires the same experience and this motivates him to initiate, to experiment until he owns the knowledge of his mentor.

For example, Jesus experienced the love of God and the experience was so potent that he had to express it, even if it meant the great demonstration made on the cross.

This expression of love was so potent that the desire for the experience of the Love of God has entered the heart of many disciples since that time.

“Back of every noble life there are principles that have fashioned it.” George Lorimer