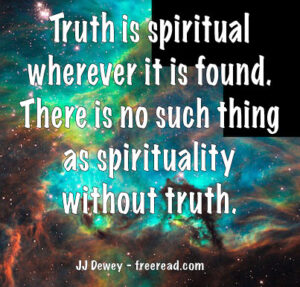 DK says, “The long divorce between religion and politics must be ended…” Reappearance of the Christ, Page 18

Now most people in religion, philosophy and metaphysics, as well as politics, believe in the complete separation of church and state – but DK seems to believe otherwise.

How do you suppose the “long divorce between religion and politics” will come to an end? How will they work together?

First, let me make one point perfectly clear, with which I am sure DK would agree, as well as all people in this group.

The Founders of the Republic sought to create a union which would not be subject to a state religion as existed in other countries. In other words, each person should have the freedom to worship how, where and what they may.

This idea is being more universally accepted all the time. There are a few holdouts across the world where citizens are restricted in their freedom to worship, but overall this particular type of separation has been deemed good by the majority. To understand the great progress we have made, it is helpful to examine the control of religion just a few hundred years ago compared to today.

Now reflect back in Book III, The Lost Key, where we have the example of the swinging pendulum. The teaching is that we humans tend to be extremists. When we realize the error of our ways in one extreme, instead of just making the correction, we swing over to the other extreme, missing the point of truth in the middle.

The saving grace of this is that with each swing the extreme is a little less because the force of gravity (spirit) and friction (reason) slows it down.

The point is that a few hundred years ago the swing of politics and religion was on one extreme (no separation) and now it is on another extreme, which is too much separation.

What do I mean when I say too much separation? I mean that the political process has moved way beyond the separation necessary to insure freedom of religion and is seeking to insulate people from religion – sometimes termed “freedom from religion.”

Here are some examples of this overkill.

For instance, here in Boise is a cross on a hill overlooking the city that was placed there by the JC’s back in the 1950’s. They actually bought the land and placed it there. Even so, there is a strong movement and lawsuits to force the city to remove it with the idea that it may offend some non-Christians.

Many people in the city are outraged by this movement, even many non believers. I personally have no attachment to the symbol of the cross (which was an instrument of death), but it represents a part of our history and it has great meaning to the majority of the population.

In the views of many these types of extreme separation represent intolerance and small-mindedness. Many feel that the state should be more tolerant of religious expression whether it be Christian, Buddhist, Moslem etc., as long as that expression does not lean toward something harmful.

So what is the middle way here? How tolerant and involved should the state be with religion?

I think the rule of thumb should be this:

The state should not impose any religion, but neither should it oppose any spiritual thought which seeks to elevate the spirit of man.

If some group wishes to put up some statue of Christ, Mohammed or Buddha on public land, this should be looked upon with the same consideration as other groups seeking to erect a statue of Washington, Edison or Porky Pig. The basic question should be answered by examining the will of the community to discover if the general population would be enriched by it.

The latest election has the pundits of the country contemplating the people of the heartland who dominated the results. Some are starting to realize that the national media and politics may have strayed too far from religion as a point of discussion, for it is still an important subject to so many.

What I see is needed is greater freedom of expression of religious, philosophical and even metaphysical points of view. If you think the media is intolerant of traditional religious expression just try to throw some good metaphysical or New Age material at them.

Jerry Brown hinted at some new age thought and the press immediately nicknamed him “moonbeam,” which doomed his political future. The media made so much fun of Shirley MacLaine’s public expressions that she became reluctant to talk about her views.

We need to become more tolerant of public expression of spiritual thought without immediately becoming reactionary and accusing the person of imposing his views. As long as a person’s views are not imposed by force of law he ought to be able to freely express them.

The time needs to come again that that world will embrace politicians who are also spiritual people and teachers, who will elevate the hearts of the governed. Marcus Aurelius, the Roman emperor, was a great example of this. Not only was he a politician, but he was a spiritual philosopher who taught his people and was loved by them.

The spiritual politicians of the future will lead the world toward the path of peace and “right sharing” as DK calls it, but notice the word “right.” There is a sharing which does more harm than good and a sharing which truly helps those in need.

Future politicians will also lead us toward “right human relations,” and this will be accomplished again through the teaching of spiritual principles.

It is silly to think that the teaching of science, history, politics, literature, the arts, etc is good for the state to support while spiritual philosophy is to be completely ignored.

Freedom of expression must be encouraged all the way around for a nation to be whole (holy).

“He (Christ when he comes again) will be limited by the quality and the caliber of the invocative appeal of humanity and that, in its turn, is conditioned by the attained point in evolution.” Reappearance of the Christ, Page 18

The average believer thinks that Christ will be unlimited when he comes again, but here we are told of a limitation.

Question: What does this statement tell us about the quality of the teachings that Christ will give us?

“A flower always struggles to survive, but it never forgets to bloom with joy.” Debasish Mridha