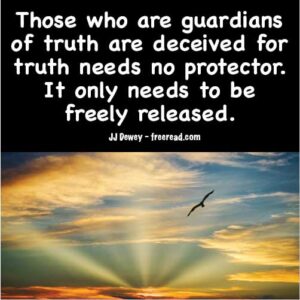 Reader comment referring to my previous comments on the prophesy of Malachi: “Wow. So, if we don’t do what God tells us to do all life on earth will be destroyed? No pressure there! This is the kind of God that has no place in my life.”

God himself is subject to the laws of cause and effect and when a cause is set in motion then it must play out. For example, if a person decides to drive over a cliff no one is going to stop him. If he wants to self destruct and set in motion the cause then the effect will follow, unless some loved one steps in and influences him to change.

Humanity, as a whole, operates on a similar principle to a smaller life. If the human race makes a decision to self destruct, then they have the power to do so. Loved ones (masters, disciples and leaders) may try to create an influence to change the outcome, but it is a folly to think that bad things cannot happen to humanity just because there is more at stake than for a single human.

Every once in a while a supernova goes off in the galaxy and a whole solar system is exploded into oblivion in an instant. The lives who live there could just think God is mean or they can realize that cause and effect rule in the universe and no life, not even God, can interfere with the results of a determined free will.

DK talks about the possibility of the earth being destroyed. He doesn’t expect it to happen, but says if it does we’ll just build a new and better world for our next attempt.

I personally believe that we will have some nerve-wracking points of tension during the transition to the new age, but I believe the light is strong enough that we will create a better world for ourselves.

I have been thinking about politics and religion/spirituality and have come to an interesting thought.

On the other hand, many of the religious/spiritual/metaphysical types do not like discussing politics or bringing it into the spiritual equation.

This latter fact was really brought home to me during the last gathering. As I started to present the Principles of Political Unification it wasn’t long until many of the audience got up and left. During the break I talked with several of these and they complained that they did not come a long distance to listen to politics.

Now keep in mind that the topic of political unification was not partisan in any way so this was not what offended them, but the subject of politics itself.

I think we are entering a time in which we must realize that politics and religion are merely two branches of a vaster subject, a little like the right and left brain function making up the thinking of the whole brain. If we divorce ourselves from either the thinking side, or the emotional side, we will not be whole. Even so, politics and religion are both spiritual when looked at synthetically.

Politics is centered around the life principle, designed to give us the trinity of order, security and certainty.

Religion is centered around death and the unknown and is designed to give us faith, love and comfort in the midst of uncertainty.

We cannot live life to its fullest without understanding death, not can we die in peace if we have not faced life and made the best of it.

That said let me give a quote from chapter two of the Reappearance about this subject:

“The common people are today awakening to the importance and responsibility of government; it is, therefore, realized by the Hierarchy that before the cycle of true democracy (as it essentially exists and will eventually demonstrate) can come into being, the education of the masses in cooperative statesmanship, in economic stabilization through right sharing, and in clean, political interplay is imperatively necessary. The long divorce between religion and politics must be ended and this can now come about because of the high level of the human mass intelligence and the fact that science has made all men so close  that what happens in some remote area of the earth’s surface is a matter of general interest within a few minutes. This makes it uniquely possible for Him to work in the future.” The Reappearance of the Christ, Pages 18-19

Notice that he makes a quite controversial statement:

“The long divorce between religion and politics must be ended…”

Now most people in religion, philosophy and metaphysics, as well as politics, believe in the separation of church and state – but DK seems to believe otherwise.

How do you suppose the “long divorce between religion and politics” will come to an end? How will they work together?

Does this have anything to do with the coming of Christ?