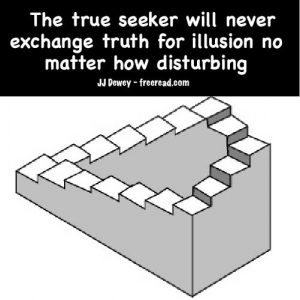 We received quite a few posts on the “Avoidance of Thought” as previously discussed. Looks like many of you have had to deal with the problem. This avoidance on the part of the emotionally polarized is indeed a trial of the patience of the mental person.

Now let us move on to the next attribute.

The emotional person makes up mind then looks for facts to support his mindset.

The mental looks for facts and then makes up mind.

Contemplate this distinction as a seed thought and see how it plays out.

Example: The emotional person, because of religious teachings, may have a mindset that the universe is between 6,000-10,000 years old. He then only looks for facts that will verify this belief. The amazing thing is that he seems to find quite a few.

On the other hand, the mental person begins his search with an open mind realizing that all he has been taught could be wrong. He gathers facts and then draws his conclusion based on the evidence and not upon dogma or preconceived notions.

Upon taking this approach the mental person will normally conclude the earth and universe is billions of years old, a far different conclusion than the emotional person who leans upon dogma.

Because of this do not conclude that all scientists take the mental approach. Some have an emotional attachment to their pet theories. The standard Big Bang is one many cling to with emotional attachment. According to this, the Big Bang happened around 13.5 billion years ago. I found it interesting that when the Hubble Telescope observed galaxies dated around 21 billion years old that many scientists swept this discovery under the rug and did not let it disturb their belief system. (Note: This report was so successfully swept under the rug that you cannot even find it now)

There are emotional and mentally polarized in all avenues of thought. See if you can discover how they manifest this attribute.

Curiously I see the dialog did lead to discussing David Icke and his teachings that evil lizard shape shifters are among us. Is it possible that such a thing could be true?

This leads us to the next attribute.

When an emotional person comes cross something that goes against his belief system or sounds fantastic by his group standards he will immediately write it off as being untrue. He will refuse to listen to any argument to the contrary.

On the other hand, the mental person will always consider the probabilities, and if there is even a slim chance of a thing being true he will be open to the possibility. He will listen to any logical argument to support a fanciful belief.

On the other side of the pendulum, the emotional person will all too readily accept a teaching that fits within his belief system or has the approval of his group. He will often accept that for which there is no evidence to substantiate.

The mental person will never accept carte blanche, but will question and analyze even within his belief system and among his peers.

These lines of approach used by the mental person are confusing for the emotional. On one hand, he considers the mental person gullible when he is open to the far-fetched as worthy of investigation, but then he will condemn him as closed-minded, on the other, when he questions a cherished emotional doctrine.

This brings us to an interesting dividing line between the two groups and the second Key into consideration. When presented with a belief the mental person will use judgment and the result of that judgment will not be predictable to the emotional person.

The emotional person will forfeit judgment and lean on his belief system and his group influence as the main determining factor in what he accepts and believes.

Reader Comment: “I am closed-minded in the sense that if something or someone contradicts something I know to be true then I hold what else they say in doubt.”

Knowing a thing beyond reasonable doubt and believing a thing are two different items.

I know beyond a reasonable doubt that I am sitting here typing on this computer, but I only have a belief that the stock market will go up tomorrow. It is good judgment to use that which we know as guidelines to sifting knowledge. On the other hand, the emotional person will use beliefs as his guidelines for truth, often giving a nebulous belief more weight than a known reality.

On the other hand, even though this belief is very fantastic, I do not completely rule it out and because of other factors I do have an explanation for the fact that many have claimed to have seen lizard shape-shifters.

Early in the history of our humanity there was a lizard-like race. The talking snake in the Garden of Eden is evidence of this. These entities were spiritual vampires and sought to dominate and eventually destroy the human race. This generated karma for them which destroyed their own race instead and humankind. Some of the darkest of these ancient entities are now too low in vibration to incarnate, but others have moved on and incarnated into the human race. Many of the serpent people are very astute and are in positions of power and authority in the earth.

Now we come to the reason some think they see shape shifters. Every now and then a person who is very sensitive will come across an entity who was a member of the serpent race in a past life and with psychic vision he will see him as he was in the ancient past rather than as he is now. When this happens the person will sometimes believe he has seen a shape-shifter.

The person’s shape did not change. Instead the angle of vision changed.

Question: Have you known emotional people who did not use judgment and were either too quick to believe or disbelieve? Describe. Did you go through a process of learning to use judgment in your life?

A reader responds saying that he has doubts about my teachings on the reptilian race, but he is trying to keep an open mind and keeping it on the shelf.

You are correct to not go along with any teaching, whether it seems to be from God, angels or men, unless it registers inside. You also show a positive example by placing the teaching on the shelf and not dismissing it out of hand.

I think all of us have a number of teachings on the shelf waiting to see how they fit (or not fit) in.

In fact this “on the shelf” idea is a principle which plays out even with the highest of lives. The Ancient of Days himself receives teachings from the Solar Logos that must be put on his shelf before he can assimilate.

Perhaps if I give the principle behind this serpent race teaching it will make more sense.

On most of the planets similar to earth throughout the universe there is a struggle in evolution between two groups of lives. These two groups are the warm blooded mammalian and the generally cold blooded serpent lives.

On each of these planets, including earth, these two groups achieved the beginnings of humanoid form and consciousness. Because they were so different from each other and the consciousness of that point in evolution is centered on survival of the fittest, there always occurs an evolutionary struggle as to which group will represent the humanoid upon the planet.

In early evolutionary times the serpent lives will dominate, but because the mammalian humanoids are more sensitive to soul contact they eventually prevail, except on a handful of planets which are dominated by the Dark Brothers.

As the mammalian humanoids become dominate the reptilian race becomes extinct and the serpent entities who are ready for higher evolution incarnate in the race they once saw as inferior. Most of them adapt and move on, but a handful carry with them the desire to dominate and seek to enslave the human race of today.

The creation of Adam in the image of God has a physical aspect to it. Some ancients saw the mammalian humanoids as being in God’s image because the higher lives they worshipped bore this image. The serpent race cannot achieve the spiritual contact necessary to become as the gods (“as one of us”).

It is interesting that many of those who claim to have seen extraterrestrials depict some aliens as forms which have evolved from the serpent side.