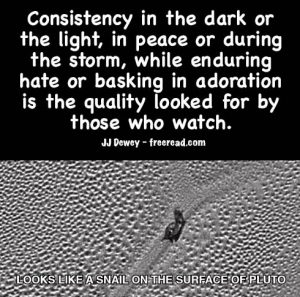 A reader expressed difficulty in see   the truth of these words I posted: “The creation of a molecule is not difficult because of the degree of soul contact necessary. There are many who have such contact. What is the difficult part is the willingness to use the contact they have to insure oneness.”

Anyone who consciously touches the soul, even once, has a strong desire to gather with others who also have soul contact. These individuals are also happy to acknowledge the soul in strangers and casual contacts. The problem of unwillingness manifests when the personality and imperfections (of others) which accompany it come to the attention of the fledgling disciple. Until the disciple passes the third initiation and learns to stay focused on the light of the soul, in season and out of season, he is susceptible to distraction.

Let us say we had a group of people capable of soul contact. Ralph has had some soul contact and desires to join. The group is friendly and the meetings are inspired. There are several times that he touches the soul and shares spiritual love with all the members. He feels like he has gone home and all seems well.

But not for long…

One day Jane asks him about his background and he mentions he grew up in a Jehovah Witness family. Jane then expresses her irritation at the Witnesses who come to her door almost weekly. “Pests” she called them and this was a trigger word that rang in Ralph’s mind.

Now instead of seeing Jane and the rest of the group as Solar Angels he begins to focus on them as imperfect mortals. Ralph wonders if there are others who are as intolerant as Jane. He also wonders if this intolerance is just the tip of the iceberg with Jane.

Sure enough, next week he finds what he is looking for. In the next meeting he notices that Jane is going out of her way to be the teacher’s pet by being extra friendly to the group leader. He concluded that she wasn’t really friendly, but just putting on a show to be the center of attention. Then during the group discussion Jane talks about the Jehovah Witnesses who came to her door again. She tried to enlighten them but they seemed beyond reach. She used words like “closed minded” “zealots” and “beyond reach.”

“How insensitive,” thought Ralph. “She knows my family are Jehovah Witnesses.

During the next few weeks Ralph pats himself on the back for making a Herculean effort to remain in the soul despite numerous other faults exhibited by Jane. He begins to wonder how any true disciple should be expected to put up with such shenanigans as she displays.

Then Ralph begins to privately mention his concerns with Jane to the members of the group. Some seem to see his point and others do not. Ralph begins to divide the group in his mind between Jane supporters and Jane opposers. Within a short time he starts seeing as many faults in the Jane supporters as he did with Jane herself. On top of this, the group leader seems to like and support Jane. How could he overlook her dark side if he was truly in the soul?

Now only a short time passes before all of Ralph’s attention is taken off of the soul and focused on the personality. In this state of mind he concludes that he was wrong about the group. Most of the people are far from being ready for soul contact.

He then stirs up several members who agreed with him and they leave the group and start one of their own.

All this time Ralph had absolutely no doubts about his own soul contact, but, of course, was gravely concerned about that of others.

He forgot the basic injunction of Christ that we must pull the beam out of our own eyes before we can see the sliver of faults in the eyes of our brethren.

This problem occurs to some degree in almost any group of people who have spiritual contact and service.

The solution, of course, is to let those who have the downward cast vision depart to enter again the lower grades of learning.

A reader expresses difficulty in understanding how two or more people having a degree of soul contact would not continue in love and trust.

Ralph and Jane gathered together in soul contact and it was not long before the separated. Many couples meet and experience soul contact approving their union, only to experience a bitter divorce a few years later.

Many spiritual groups have been formed with lots of love, soul contact and good will only to become sharply divided a short time later, sometimes as bitter enemies.

The sad part of all this is that the initial offense is often a harmless comment, not meant to offend.

Every aspiring disciple must go through this fire of temptation from the faults of others that can cause a shift of attention from the soul to the personality.

The same excuse is always voiced, which goes something like this.

“Anyone in his right mind would be driven crazy by the likes of him/her. You can’t expect me to stay in the group and take this type of abuse!”

The question the aspiring disciple needs to ask is not how many faults the other guy has. Instead he must ask himself this.

“Am I headed toward a consciousness where no one, not even the devil himself, can take my attention away from the soul and the ability to see Christ in the hearts of all my brothers and sisters?”

Question: What if a group member is truly obnoxious or harmful?

Answer: He will be dealt with according to the laws of the group. As long as he is still in the group the job of the disciple is to not take offense, to not rise to anger, to not stir others to take sides against the wayward brother, to not judge through the eyes of the lower nature, but to stay focused in the soul irrespective of the storms on the outside.

When Jesus and the apostles were at sea a great storm arose and the disciples feared for their lives. Yet Jesus did not focus his attention on the outer chaos. Instead he maintained an inner peace. From that point of inner peace he spoke the words: “Peace. Be still.”

He spoke and the storms were no more.

The duty of the disciple is to find that inner peace, even in the midst of the horrific personality storms, which do arise. From that point of peace he speaks: “Peace, Be still.”

He speaks and discovers the storm was only in his own aura. The storms of his lower nature are no more and he finds the key to peace is not to quiet another, but his own self.

And in that quiet he finds the soul contact which never fails.