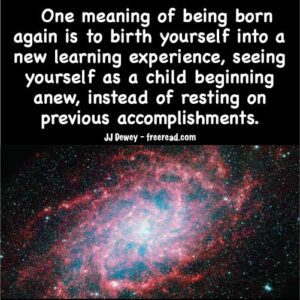 DK says: “The doctrine or theory of reincarnation strikes the orthodox Christian with horror.” Reappearance of the Christ, Page 116

Why do you suppose this is the case and what can be done to assuage those fears?

Good comments from the group on this.

There were a number of valid reasons presented. Two strike at the heart of the resistance.

The first stated that the orthodox Christian view is that we have one life and then, if we accept Jesus, we go straight to heaven for all eternity. To accept reincarnation would be to put off eternal bliss and accept that there are numerous tough lifetimes ahead for us.

What would it take to open this person’s mind?

He needs to realize that eternity in the standard heaven would be much worse than the challenge of future lifetimes. Then too, after we pass through our cycles of lifetimes, we achieve a fullness of joy and attain to “the measure of the stature of the fullness of Christ.”

The second reason someone presented was that many view life as an extreme hardship and a dreary experience and feel they have had all they want of mortality with its challenges. These people do not want another life. Instead, they want to believe that they will spend the rest of eternity with God in painless peace.

The path of enlightenment for this person lies in the realization that that the present is all there is and if one cannot be happy and content in the here and now then he doesn’t have much chance of having any fullness of joy in the great beyond. You are the same entity after you pass on as you were before you died.

When the seeker realizes that true happiness consists not of death, but life in the here and now and making the best of where we are then this obstacle is passed.

There are a number of lesser roadblocks to seeing the truth of reincarnation. Another is the fact that we lose our memories between lives and will be born with a new identity and not recognize family and friends.

“I want to always be me,” is one statement I have heard.

If you always want to be you then you will not want to be transformed to some perfect person in heaven who is not you, but would much rather continue to be you with a new name and face.

Reincarnation guarantees the continuation of identity much more than the orthodox religious view that makes saved sinners into instant saints at death.

(1) A warped view of what the word reincarnation means.

(2) The atonement of Christ.

(4) The doctrine has not come from a recognized authority.

In addition, others emphasized people’s attachment to their belief systems and the reluctance to let them go.

Overall, there are many reasons people resist this teaching, but there are many more reasons to accept it. Perhaps the strongest appeal to me in first considering it was the fairness of the doctrine.

DK says: “If the goal of right human relations will be taught universally by the Christ, the emphasis of His teaching must be laid upon the Law of Rebirth. This is inevitably so, because in the recognition of this law will be found the solution of all the problems of humanity, and the answer to much of human questioning.” Reappearance of the Christ, Page 116

Question: How does a knowledge of reincarnation lead to right human relations and “the solution of all the problems of humanity?”

It is interesting that reincarnation is often associated with metaphysics, New Age Teachings, the paranormal etc. Thus, DK associating it with right human relations, a key to solving humanities problems may seem strange and out of place.

It even seems to be a huge error to many as some blame the belief in reincarnation on a number of evils and problems that plague mankind. Perhaps the main one is this belief: “If I have more lifetimes I have more chances to get things right so I can relax in this life and make mistakes and pay for them later.”

Many Christians are reluctant to consider reincarnation because of this belief in its effect. They think it is much more effective to believe we only have one chance to get it right or we will suffer for all eternity. This puts the pressure on us to work like crazy in this life and not fritter away our opportunities.

Question: What do you think? Does the belief in reincarnation make us lazy about seriously moving ahead spiritually?

Does the belief in one life only have a positive effect spiritually?

Here are two interesting comments made:

Comment One: “Thinking one has only one an life all or nothing shot often leads to guilt and depression over thinking one will not make it. Guilt always stifles progress.”

Comment Two: “Personally there are days where I feel the full force of, it seems, thousands of lives. I feel positively ancient, and as though it has taken me aeons just to reach this rather primitive stage of spiritual development. I do feel an urgency to ‘get on with it’. I am grateful however, that we have limitless opportunities to get it right. I am sure I have needed every one of them!”

JJ: Interesting comments, as well as others I do not have time to include.

When I look at how much I have learned from this current lifetime it is evident that you are correct. I’m sure we needed each of our lifetimes to get to where we are today, no matter how humble our situation.

Notice that the teachers of the human race have emphasized different doctrines in differing ages and climates. Also notice that in certain circumstances reincarnation is openly taught and then other times it is not but the total emphasis seems to be on the here and now, as if this life is all important.

Sometimes this emphasis has occurred because of the need of the students, but other times it was because the public mind-set was too biased against reincarnation and the teachers had to work with what the students were willing to accept.

Does the teaching of reincarnation cause some to procrastinate their spiritual progress? The truth is that for many beginners on the path who view all things in black and white it does create some problems. Some of these people will seek for any excuse to delay the hard work and will indeed think that because there are many lifetimes they will eat drink and be merry in this one and correct any current problems in the next one.

But even these people can be set straight if they have wise teachers to set the true path before their eyes. But if the majority of the students tend to fall into this error the teachers will often avoid mention of multiple lives and teach about dealing with the here and now. In addition, these teachers will sometimes form an inner group and teach the higher principles.

(1) Reincarnation is already the prevailing doctrine, such as in Hinduism and Buddhism. If the teaching seems to cause procrastination among the spiritual infants then they will attempt to teach the correct principles behind it to rectify the situation. (2) The students are more advanced than average and are open to higher teachings.

(3) If a cycle is reached where this and other teachings need to be planted for future fruition.

So, what effect does the teaching have on the prepared student? It has the opposite effect on him as on the black and white student. Instead of procrastination the spiritual student sees cause and effect as real and imminent.

Have you ever noticed that spiritual infants who believe in an eternal hell will often risk going there for a simple pleasure or two?

It is difficult to imagine how unreasonable such risk would be if their belief were centered in reality. Compare the pleasure of an affair, for instance, to burning in fire and being stabbed with pitchforks for eternity. The fact that this deters so few who are tempted tells us that the person internally does not really believe in such punishment or he is ignoring all logic associated with his negative beliefs.

The interesting thing is that for the spiritual advanced student the possible loss of a day’s time is more of a deterrent to him than are the eternal fires of hell for the neophyte. Why is this?

Because the spiritual student looks at true cause and effect and sees future effect as if it were in the present. He thus works to solve future problems with as much energy as current problems. The beginning student only lives in the past and present. He is incapable of seeing the future as part of the eternal now. In his consciousness it is as if the future will never come. This person will be more concerned about losing $5 today then the possible loss of everything he owns several years from now. He will be more concerned about his $10 increase in social security check now than the possible bankruptcy of the entire system 20 years hence. He will be more concerned about a little pleasure now than of a lot of pain down the road.

The exception to this would be if the person were programmed to plan for the future, as in a standard retirement package, but in this the neophyte would be unable to plan outside the box.

The advanced student sees the future as a true part of his reality and the beginner, though he realizes the future exists, does his best to ignore it and concentrate on the now.

Many New Agers tend to fall into this trap and attempt to only live for the present day emphasizing the cliche that the present is all there is.

While this is a true statement it is a great illusion to assume we can ignore the past and the future and live with no influence from either.

These facts must be realized.

(1) The present quality of life is an accumulation of a whole eternity past. Everything from our past has a ripple effect on our present.

(2) Any point of time in the future will eventually be the present here and how. It is our responsibility in the now to condition and prepare that future point so when it becomes the present it will add to our joy and quality of living.

I have met people who preach about living in the present, whose present is a living hell as far as I am concerned. The wise will see the past, present and future linked as one in the dimension of time and take them all into consideration as they work on the great task of capturing their part of the great Law of Dominating Good.

Now – how does the principle fit into the idea of right human relations. We’ll cover that soon.

“Man is the only animal that can remain on friendly terms with the victims he intends to eat until he eats them.” Samuel Butler (1835 – 1902

1 thought on “Advantages of Rebirth”